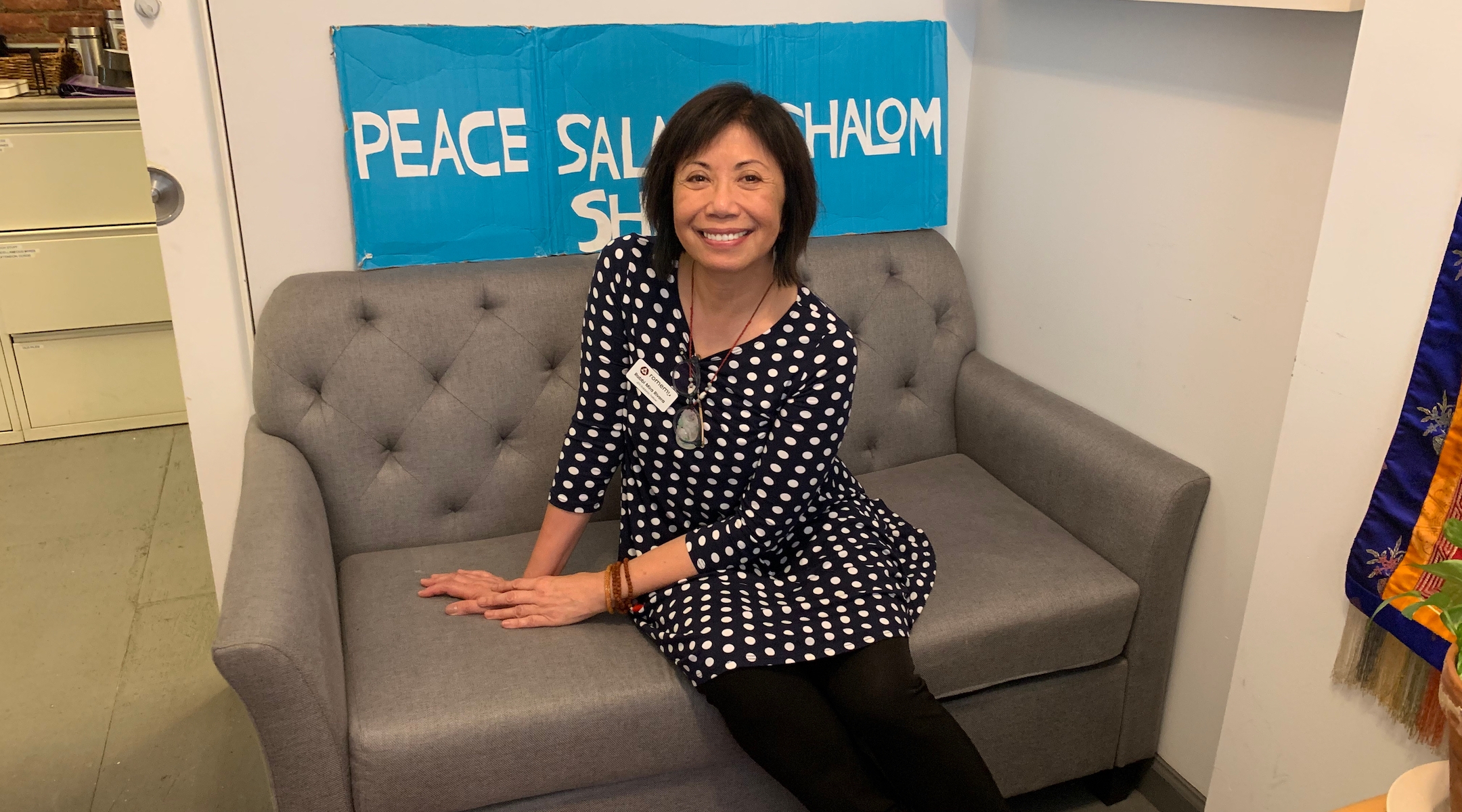 NEW YORK (JTA) — There’s a small framed sign in Rabbi Mira Rivera’s office that reads “mizrach,” the Hebrew word for “east,” so she knows how to face Jerusalem when praying.

On the opposite wall hangs a bright blue sign with the word “peace” written in four languages — English, Arabic, Hebrew and Sanskrit. Rivera made it from a cardboard box for a solidarity event at the Islamic Cultural Center here following deadly shooting attacks at two mosques in Christchurch, New Zealand.

On a third wall hangs a colorful Tibetan silk cloth that displays symbols associated with peace, fertility and unity.

Though an unexpected combination, the three somehow mesh in Rivera’s small office, similar to how her identities — a Filipino-American yoga teacher turned dancer turned rabbi — seem to meld effortlessly.

But it wasn’t always the case.

“People would say things like, oh so when did you covert? Are you marrying somebody [and] that’s why you’re Jewish?” she recalled in an interview Monday with the Jewish Telegraphic Agency. “It’s always up to now the same story, the same language.”

Things are different at Romemu, a popular Jewish Renewal congregation where this week Rivera celebrates her anniversary as a rabbinic fellow.

Rivera, who is in her 50s and the first Filipino-American woman to be ordained a rabbi, recalled attending Sukkot services at the congregation in 2016, before working there or becoming a regular. She was “shocked” when she was approached and asked if she wanted an aliyah. Though it’s common to offer visitors to a synagogue the honor of reciting the blessing during the Torah reading, Rivera said she never had the experience.

“For me, a person of color, that never happens, ever,” she said.

Jewish Renewal, the tiny but influential movement from which Romemu emerged, is among a number of  organizations working to educate and promote diversity in the Jewish community. Eleven percent of American Jews do not identify as white, according to the Steinhardt Social Research Institute’s American Jewish Population Project, although a new report suggests the number may be higher. Jews of color remain few and far between in the rabbinate and community leadership roles.

At Romemu, Rivera works alongside its founder and senior rabbi, David Ingber, helping him with everything from visiting sick congregants and representing the synagogue at political and interfaith events to occasionally leading services. Her position is part of a project by the Jewish Emergent Network, which represents seven nondenominational and innovative communities across the country.

Romemu is nontraditional in many ways. It does not have a synagogue building and services are hosted at a Presbyterian church on the Upper West Side. Its services combine traditional prayer with meditation, song and dance. This summer, the congregation is hosting a Jewish learning program combining Torah study with meditation that is open to both Jews and people of other faiths.

Outside her work at Romemu, Rivera works to build community among Jews of color — something she lacked until recently.

After converting, she asked a rabbi and Jewish community leaders if she could speak to others like her. She was told that “people don’t want to be outed” as converts.

Seeing other people of color in synagogues, she would think, “They told me I shouldn’t really approach them.”

That experience led to “years of isolation and loneliness,” she said.

Now Rivera works with organizations such as Jews For Racial and Economic Justice and Bend the Arc: Jewish Action to build community among Jews of color.

Ingber said Rivera’s advocacy on behalf of Jews on the margins makes her “an inspiration for others to live their life in service of that truth and of that longing to see justice, to see human beings treat one another with respect and integrity and dignity.”

Rivera, who attended Catholic school but started practicing yoga as a teen, came to Judaism through her two lifelong passions: meditation and dance.

A Detroit native, she was raised in the Philippines by her grandmother from the age of 2. After finishing high school, Rivera went to India to study meditation and yoga. She studied there with Jewish teachers from around the world and had her first exposure to social justice teachings rooted in the Jewish precept to heal the world.

Rivera later moved to Israel to teach yoga, where a visit to the Western Wall had a profound impact. She recalls seeing the Kotel lit up by the sun and having an urge to “plaster my body against the wall.”

Eventually that thought would lead her to convert to Judaism, raise a Jewish family and become a rabbi. She and her husband, Jerome Korman, the music director for the National Dance Institute, have two children and would often lead musical programs at B’nai Jeshurun, an unaffiliated synagogue on the Upper West Side.

But first Rivera went to New York to pursue her dream of becoming a dancer for the Martha Graham Dance Company, the oldest dance troupe in the country. She performed modern dance with the New York-based company from 1987 to 1991.

There, too, she found Jewish connections. Among her teachers were the prominent Jewish dancers Gabriela Darvash and Pearl Lang, as well as conductor Stanley Sussman, who all encouraged her to further explore her connection to Judaism.

“The Jewish world was the dance world for me,” Rivera said.

In 2009, her religious journey led her to enroll in rabbinical school at the Conservative movement’s Jewish Theological Seminary.

During the application process, a rabbi asked about her family origins. That led Rivera to look into and discover something unexpected: Her family might have Jewish roots. Her maternal great-grandmother’s family came from Spain to the Philippines, and Rivera believes they were conversos, Jews forced to convert to Christianity during the Inquisition. She points to food practices that her family passed down that bear similarities to the rules for keeping kosher.

Following her ordination in 2015, Rivera worked as a chaplain for Mount Sinai Hospital and Dorot, an organization that provides services to Jewish elders, before eventually landing at Romemu in 2017.

With Romemu, Rivera has found a spiritual home where she feels welcome. She wants other Jews of color to find one, too, whether in a congregation or through connections — physical or virtual — with others who share their identity.

“I think in many ways we are possibly where the LGBTQ community was attempting years and years and decades ago,” she said. “Now we have language and we can find each other.”