Steny Hoyer has a tough job: Uniting Democrats on Israel 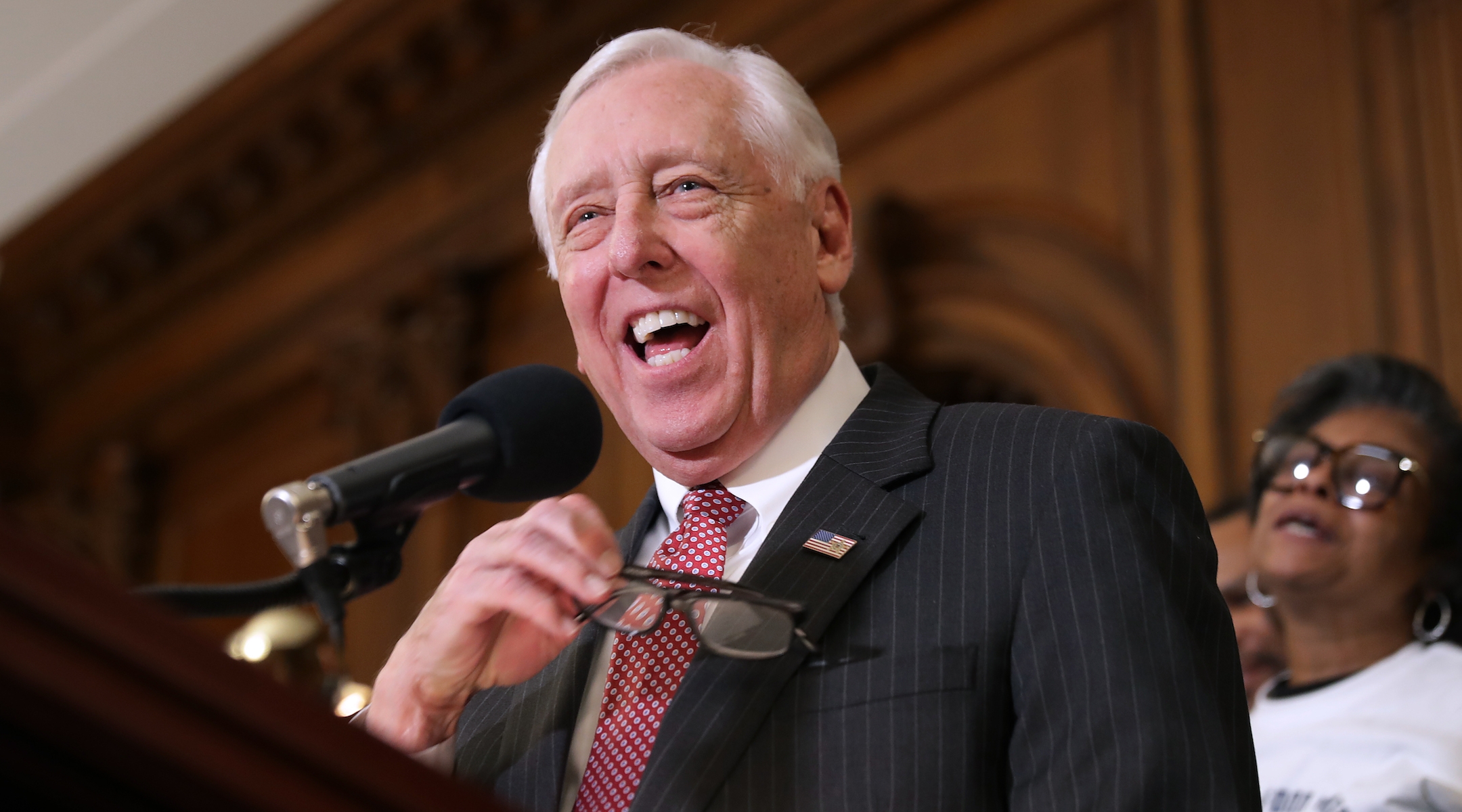 WASHINGTON (JTA) — Steny Hoyer, the longtime congressman from Maryland, is currently the Democratic Party’s majority leader, one step below Speaker of the House Nancy Pelosi. But for years he was the party’s house whip, responsible in part for managing how Democratic lawmakers voted on the U.S. House of Representatives floor.

So Hoyer is good with numbers, and he uses them to make an argument: The Democrats don’t have an Israel problem.

Hoyer, 80, a seasoned dean of sorts of pro-Israel Democrats in Congress, is leading the largest-ever delegation of Democratic lawmakers on a tour of Israel sponsored by the American Israel Education Foundation, an affiliate of the American Israel Public Affairs Committee. There are 41 Democrats on the trip this week — four more than the previous high of 37 in 2013.

Hoyer, who spoke to the Jewish Telegraphic Agency from Israel, pointed out that among the 59 freshmen Democrats in the House, 32 are on the Israel trip. (There was a higher percentage of the freshman class on the 2013 excursion: Of the 38 Democrats elected for the first time the year before, 31 took part.)

He also said the “overwhelming majority” of House members — 398 of 435 — voted last month for a nonbinding resolution that condemned the movement to boycott, divest from and sanction Israel, and only 16 out of 235 Democrats voted against.

Lastly, Hoyer said, only two Democrats have made statements about Israel that he finds problematic — Rashida Tlaib of Michigan and Ilhan Omar of Minnesota, who have come under fire for comments about Israel and for supporting the boycott Israel movement, or BDS. He said it was “absurd” to complain about their influence in comparison to that of President Donald Trump.

“You’re talking about two brand new members of Congress and president of the United States, who speaks for all the American people,” Hoyer said.

The impression among some in the pro-Israel community is that they feel squeezed between Trump’s broadsides from the right against minorities and the criticism of Israel from the left voiced by Tlaib and Omar,

“Unfortunately there’s been some attempt to make Israel a partisan issue,” Hoyer said, responding to a question about repeated efforts by Republicans to bring pro-Israel motions to the floor as a means to potentially embarrass Democrats. “The president’s statement about Democrats hating Jews is patently absurd, it’s a disservice to Israel as well. The numbers here [in Israel], Republicans and Democrats, the vote on the BDS resolution shows overwhelming bipartisan support for the commitment to Israel and its security.”

(Kevin McCarthy of California, the House minority leader, is leading 31 Republicans on the trip, also an unusually high number.)

Hoyer has led the AIEF trips to Israel for decades and been happy to be the group’s pro-Israel face. The lawmakers meet with top Israeli and Palestinian officials and tour the country, stopping at its Holocaust memorial museum, Yad Vashem, and the congressionally funded Iron Dome anti-missile batteries.

Hoyer also has reliably been the figure to appear with a Republican counterpart at the annual AIPAC conference to jointly deliver a speech on how Democrats and Republicans disagree on everything but Israel. That showcase has grown tense in recent years as rifts have opened between Democrats and Israel’s government, fueled in part by the rocky relationship between longtime Prime Minister Benjamin Netanyahu and former President Barack Obama. Hoyer and Rep. Kevin McCarthy, R-Calif., come on stage at the AIPAC Policy Conference  in Washington, D.C., March 5, 2018. They did not appear together in 2019. (Cheriss May/NurPhoto via Getty Images)

In 2016, the usually friendly conversation onstage between Hoyer and McCarthy at the conference got testy — McCarthy suggested that the Obama administration had sowed “doubt” about the U.S.-Israel relationship, and Hoyer countered that the two nations’ security establishments “are cooperating as closely today as they have in the past.”

This year, Hoyer and McCarthy did not appear together.

Hoyer also appeared to dismiss Tlaib and Omar as marginal at AIPAC 2019, but he walked that back within days, saying his complaint was aimed at the media, not the congresswomen. (Tlaib and Omar are two members of what has become known as “The Squad,” freshman Democratic congresswomen of color. The others are Reps. Alexandria Ocasio-Cortez of New York and Ayanna Pressley of Massachusetts.) It was a signal of how Hoyer, who once easily wore his pro-Israel credentials on his sleeve, now has to navigate a difficult and often divided caucus when it comes to the Jewish state.

Another instance came earlier this year, when Hoyer shut down an attempt by a handful of moderate Democrats, led by Rep. Josh Gottheimer of New Jersey, to attach an amendment that would have protected states that penalize Israel boycotters to a law that would have ended U.S. assistance to Saudi Arabia’s war in Yemen. In a closed meeting, Hoyer told the caucus that his pro-Israel credentials were second to none, but that he was not going to allow the BDS language to scuttle the Yemen bill.

There remain differences between Democrats and the Netanyahu government. Hoyer would not go into detail, citing confidentiality, but said that Democrats raised the two-state outcome and settlements in their meetings with the prime minister, who no longer endorses two states and has vowed to expand settlements. Hoyer said he told an Israeli TV station that settlements undercut the prospects of peace.

Hoyer told JTA that the overwhelming passage of the anti-BDS resolution settled the question of whether Democrats were pro-Israel, and he would push back against Republicans who argue that the nonbinding resolution has no teeth.

“We have made a statement, and it’s a very strong statement,” he said.

Hoyer said he hoped to pass another nonbinding resolution, advanced by Rep. Alan Lowenthal of California, a Jewish Democrat, that would express support for the two-state solution. Hoyer told JTA that he wants to get Republicans on board with the resolution because he said it’s key to show bipartisan unity on Israel.

Another factor is that Republican backing for two states would stand as a rebuke to Trump, who has retreated from the two-state outcome to the extent that his Middle East peace negotiating team, led by Trump’s senior adviser and son-in-law Jared Kushner, refuses to use the term in official documents.

JTA has learned that Hoyer persuaded Republicans to back the resolution, and was ready to accept three Republican tweaks to Lowenthal’s language. The most important was to remove the word “only” in a passage stating that the two-state outcome would ensure Israel’s survival and realize legitimate Palestinian aspirations. Now the language says simply that a two-state solution could accomplish those outcomes, not that it is the only solution.

J Street, the liberal Jewish Middle East lobby, which has ties to more than half the Democratic caucus, forcefully objected to the language changes.

“If implemented, these changes would completely undercut the purpose and impact of this resolution. They would hand a victory to President Trump, Prime Minister Netanyahu and all those who wish to prevent the achievement of a two-state peace agreement and to instead entrench a one-state nightmare of unending conflict and occupation,” the group said in a statement.

Hoyer and others in the caucus believe they will be able to work out a compromise after Congress reconvenes in September.