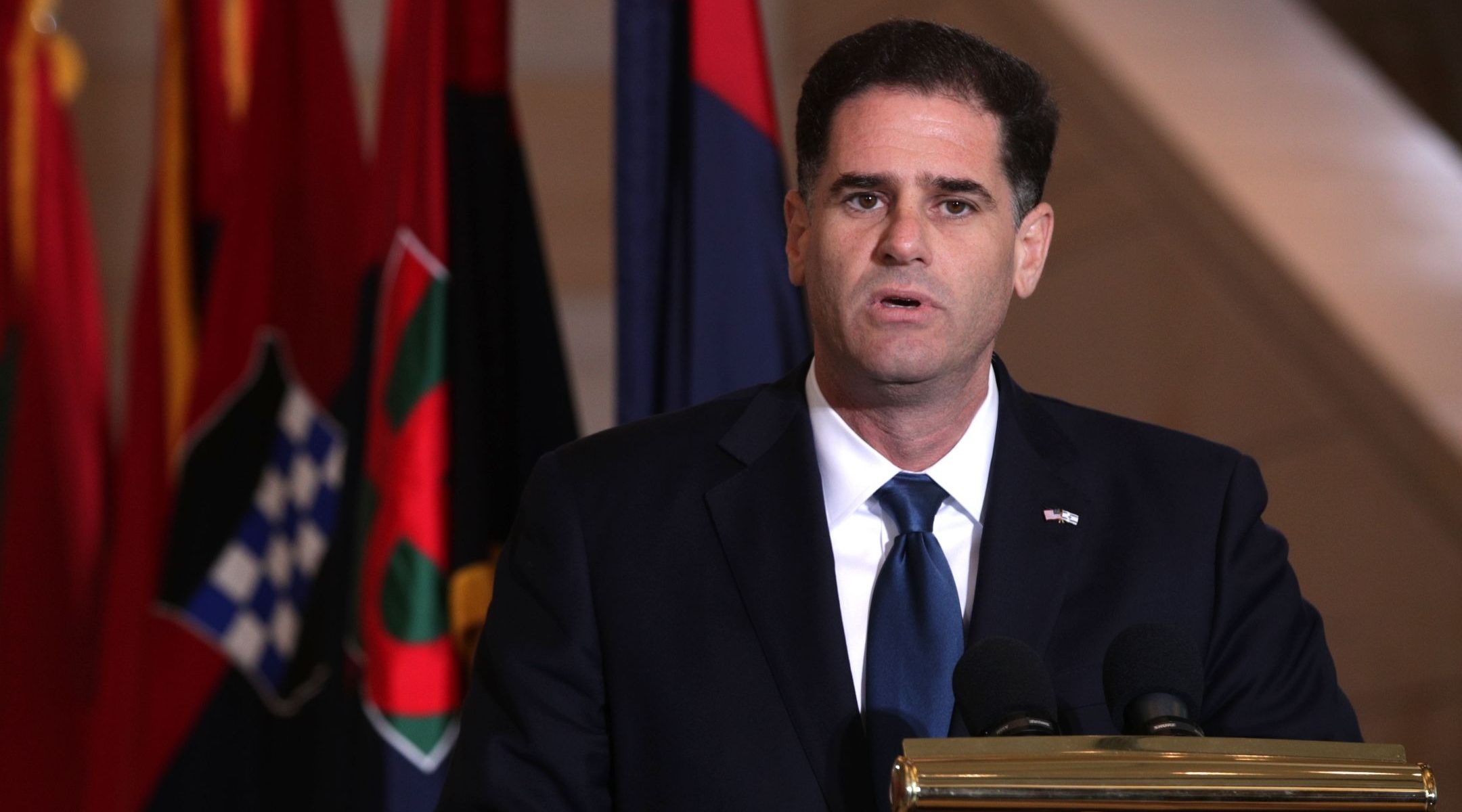 (JTA) — Israel’s ambassador to the United States said the decision to ban Reps. Rashida Tlaib and Ilhan Omar from entering the country had nothing to do with President Donald Trump.

In a conference call with Jewish groups Thursday afternoon, Ron Dermer said reports implying that Israel had caved into pressure from Trump were false.

“We were not pressured by the Trump administration to do this and this is a sovereign decision that Israel has to make,” Dermer said in the call organized by the Conference of Presidents of Major American Jewish Organizations.

Last month, the ambassador had said Israel would not bar any members of Congress. But on Thursday, a few days before Omar and Tlaib were scheduled to visit, the Jewish state reversed course. The decision to ban Tlaib, D-Mich., and Omar, D-Minn., came shortly after Trump wrote on Twitter that Israel “would show great weakness” if it let in the two congresswomen.

Dermer said the decision was motivated by the fact that the two Muslim lawmakers support the Boycott, Divestment and Sanctions movement targeting Israel. Under Israeli law, BDS supporters can be prevented from entering the country.

The move was criticized by prominent lawmakers and Jewish groups, including the American Israel Public Affairs Committee, the Anti-Defamation League and the American Jewish Committee.

At least one prominent Jewish leader had advised the Israeli government not to bar Omar and Tlaib.

David Harris, the executive director of the American Jewish Committee, told the Jewish Telegraphic Agency that earlier this week he had urged Israeli officials to admit the congresswomen.

“We turned to phone and email this week because we got wind that reconsideration [of admitting them] was in the offing,” he said. “The impact of a reversal might be politically costly.”

But echoing a statement Thursday by Israeli Prime Minister Benjamin Netanyahu, Dermer cited an itinerary provided by Tlaib and Omar as a reason for the decision to deny them entry. He said the itinerary listed the destination as Palestine, not Israel, and included no meetings with Israeli officials.

Dermer added that the congresswomen planned to meet with organizations promoting BDS, one of whose leaders has ties with the Popular Front for the Liberation of Palestine, which is designated by the U.S. as a terror group.

“The leadership of our country believes that this visit was designed solely with the intention of promoting BDS and they were gonna use this visit as platform to BDS activities,” the ambassador said.

He also said that Israel would let Tlaib visit the country if she decided to visit her grandmother, who lives in the West Bank, and promised not to participate in any BDS activities.

Dermer said the United States at various points has banned foreign politicians from entering the country. He gave the examples of Michael Ben Ari, a far-right Israeli politician who has been banned from entering the U.S. since 2009, and Narendra Modi, who is now prime minister of India but was previously barred due to allegations that he supported anti-Muslim riots by Hindu extremists.

“Many people are questioning Israel’s commitment to democracy, to openness, to tolerance and I just think there’s absolutely no basis for that,” Dermer said.

Harris said the decision was Israel’s but that it could end up hurting Israeli interests to bar the two representatives.

“This is the sovereign Israeli government’s decision to make, but as friends of Israel and the U.S.-Israel relationship, we offered our perspective that reversing the earlier decision and barring entry to these two members of Congress could be even more costly than letting them in to do whatever shenanigans and stunts they were planning to do while there.”