In Belgium, Jewish leaders worry that anti-Semitism has gone mainstream 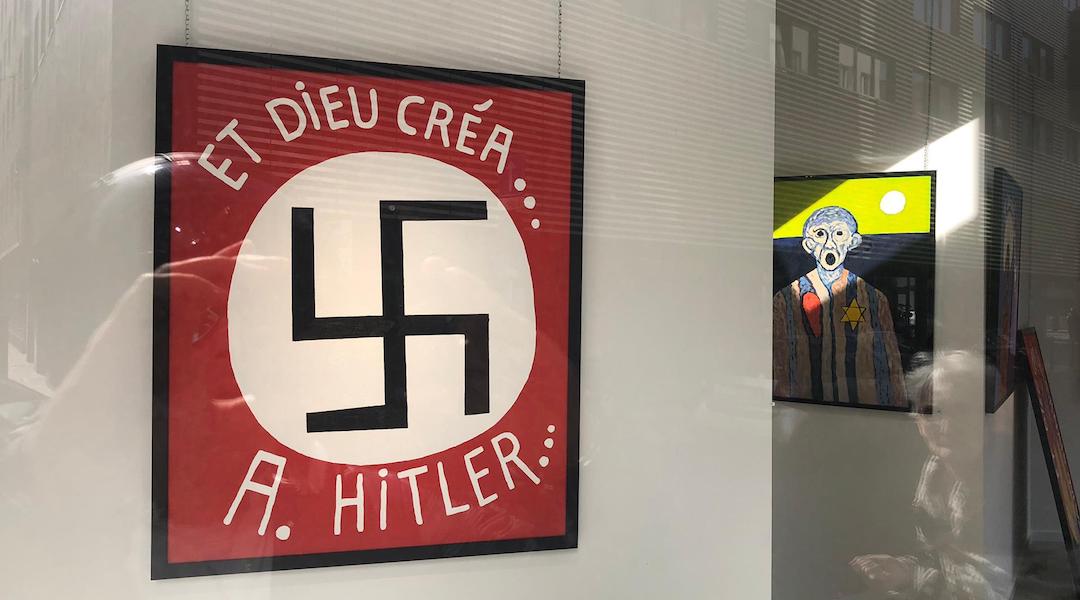 A Belgian politician presented this painting featuring a large swastika at the Bog-Art Gallery in Brussels. (Courtesy of LBCA)
Advertisement

BRUSSELS (JTA) — At a parade here in March, revelers danced to a song about Jewish greed while standing on a float shaped like an Orthodox Jewish man with a rat on his shoulder holding money.

In August, an op-ed in a major Belgian newspaper called Jews in Israel land thieves with a religious superiority complex and “ugly noses.”

And earlier this month, a local politician presented a painting he made featuring a swastika and the words “And God created A. Hitler” at a prestigious Brussels art gallery.

Such incidents are not unusual in Western Europe, where public displays of anti-Semitism are making a comeback. But their defense by authorities and the responsible parties has prompted concern that anti-Semitism is gaining a level of mainstream acceptance in Belgium that is matched by few, if any, other Western European nations.

“Nothing is unique about the prevalence and nature of anti-Semitism in Belgium,” said Joel Rubinfeld, a former co-chair of the European Jewish Parliament and current president of the Belgian League Against Anti-Semitism. “What is unusual is that recently, we’ve had a string of incidents where officials, opinion shapers and artists are defending anti-Semitism. That is a quite worrisome development, which I think is only happening in Belgium on this level.”

In the case of the parade, an annual affair in the city of Aalst that is recognized by UNESCO as an event of significance to European culture, both the organizers and Mayor Christoph D’Haese defended the display as part of the parade’s tradition of irreverence. The 2013 parade featured a float in which revelers in Nazi clothes held cans labeled Zyklon B, the poison gas used to murder Jews, and walked alongside people portraying Holocaust victims. Organizers defended that display as well.

“It is crucial to explain, once again, to the people of UNESCO that the Aalst carnival had in no way or form any anti-Semitic or racists intentions — quite the contrary,” D’Haese told the Belga news agency.

Following an outcry over the July 27 op-ed in the De Morgen daily about “ugly noses,” the editor in chief backed the writer, Dmirti Verhulst.

The op-ed “foretells the current uproar, stating that any hard criticism on Israel will always be reinterpreted as anti-Semitism,” the editor, Bart Eeckhout, wrote.

That incident followed news that Belgian prosecutors had decided not to prosecute a cafe owner who in 2014 hung a sign reading “Dogs may enter but Jews are not allowed” on his window. According to Rubinfeld, the case was dropped because the Jewish community turned down an offer to drop charges in exchange for an apology.

“Recently, we’ve seen an accumulation of anti-Semitic cases where the response was as worrisome as the original issue,” said Menachem Margolin, director of the Brussels-based European Jewish Foundation. “There is a concern that acceptance of anti-Semitism is making unusual advances here.”

Not all such examples are recent.

In 2016, a Belgian school said it was “proud” that one of its teachers had won a prize at a Holocaust cartoon contest in Iran. Luc Descheemaeker was the winner in the Second International Holocaust Cartoon Contest in Tehran  for a drawing with the words “Arbeit Macht Frei” over a wall with guard posts — presumably comparing Israel’s security fence along the West Bank with the gates at Auschwitz.

Amid an international storm of condemnations, the school and municipal authorities in Descheemaeker’s town of Torhout doubled down on their support for him. The mayor named Descheemaeker a “cultural ambassador.”

Another case came in 2017, when a lawyer for Belgium’s anti-racism authority defended a Palestinian man whom the lawyer helped convict for hate speech over calls to slaughter Jews. The lawyer said the conviction was “distorted justice instead of true justice.”

More recent, the Flemish Sign Language Center defended the inclusion of gestures at a hooked nose and at sidecurls in its visual dictionary as acceptable definitions for the word Jew.

“It may be viewed as derogatory in 2019, but these gestures … were not intended to offend,” the statement said.

Elsewhere in Western Europe, expressions of what mainstream Jewish organizations consider anti-Semitism occur fairly regularly. But those responsible rarely defend them with conviction, or at all.

In the neighboring Netherlands, for example, the BNNvara broadcaster apologized last week for allowing a caller to rant for four minutes against “money grubbing Jewry” that “must be annihilated.” In 2014, the Dutch Justice Ministry suspended and later fired a project manager for writing that ISIS is “part of a plan by Zionists who are deliberately trying to blacken Islam’s name.”

In August, Norway’s public broadcaster, NRK, apologized for airing a cartoon in which a Scrabble player forms the word “Jewish swine.” In France last year, a broadcaster dropped singer Mennel Ibtissem from a program after it came to light that in 2014, she tweeted that Israel is an “illegal and sinister state.”

And in Britain, allegations of anti-Semitism have badly hurt the Labour Party’s public image under leader Jeremy Corbyn. Jewish community leaders and others have accused Corbyn, who has called Hamas and Hezbollah his friends, among other controversial remarks about Jews and Israel, of encouraging anti-Semitism.

In a 2015 Anti-Defamation League poll of hundreds of respondents in several Western European countries, Belgium had one of the highest rates of anti-Semitism, with about 21 percent of respondents expressing what the ADL deemed anti-Semitic sentiment. The rate was below 17 percent in France, Britain, Germany, the Netherlands, Denmark, Norway and Sweden.

Yohan Benizri, the president of the CCOJB group that represents French-speaking Belgian Jews, said the public response to anti-Semitism is indeed meeker than in some other Western European nations — not because Belgium has a unique anti-Semitism problem, but due to cultural norms that may owe to the history of ethnic tensions between Belgium’s French and Flemish populations.

“We don’t like to rock the boat,” Benizri said.

Daniel Rozenberg, a member of the Stalingrad Synagogue congregation in Brussels, concurred. While many Belgian Jews are afraid to be publicly identified as Jews for fear of attack, he said, they feel no more unsafe than Jews in countries with a better reputation for fighting anti-Semitism.

“I think the problems in Belgium are ultimately not unique at all but part of a bigger problem in which Jews are examined through the prism of Israel, and where mainstream media have become a vehicle for spreading this hatred,” he said.