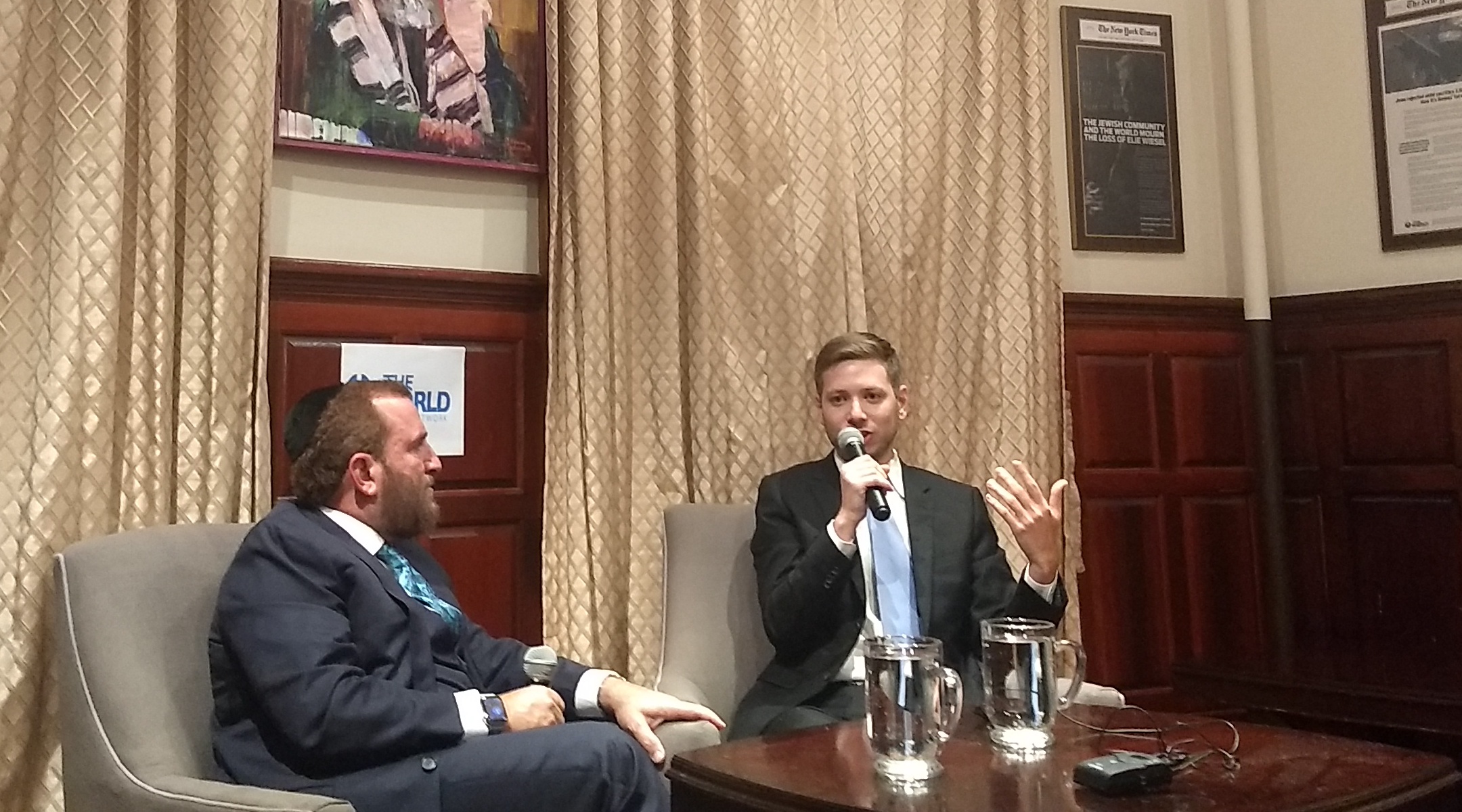 NEW YORK (JTA) – Rabbi Shmuley Boteach’s Upper West Side apartment was crowded. At least 50 people sat in folding chairs and on a couch in the living room. The front row was mostly taken up by sleek men with buzzcuts in sport coats who appeared to be security for the man in conversation with Boteach: Yair Netanyahu, son of Israeli Prime Minister Benjamin Netanyahu.

The walls of the apartment – which doubles as a sort of headquarters for Boteach, the prominent rabbi and onetime Republican congressional candidate – were filled with full-page ads that Boteach’s organization, the World Values Network, has placed in The New York Times. The ads were all aimed at those who had either criticized Israel or in some way called for a boycott of it: Hamas, ISIS, Iran, the pop singer Lorde, Rep. Ilhan Omar, President Obama, Mahmoud Abbas, The New York Times itself.

The ads were a fitting backdrop to the younger Netanyahu’s remarks, since he had his own list of enemies to talk about Wednesday night. Netanyahu’s targets likely sounded familiar to American listeners, especially coming from the son of a right-wing leader: Academia, the media, socialism, left-wing activists. The media, again.

Netanyahu – who has gained notoriety on social media for, among other things, sharing a meme of liberal Jewish philanthropist George Soros holding the world on a fishing line – accused the Israeli press of “lynching” his father and promoting a “blood libel” against his mother.

“That’s when the real serious, vicious, vile media lynch started and pretty much never ended,” Netanyahu said of his father’s first term as prime minister in the 1990s. “It’s from a small group of mainly radical, radical fringes of Israeli society that took control of the mainstream media.”

The Soros meme, which Netanyahu later deleted without explanation, was widely perceived as anti-Semitic. He’s also tweeted that he would “prefer” that all Arabs leave Israel. He got in trouble for a leaked recording of him talking about soliciting prostitutes and pimping out his girlfriend while visiting strip clubs with his friends. (The driver who recorded him recently paid Netanyahu about $8,500 and apologized for the recording as part of a court settlement for defamation and breach of privacy.)

In Boteach’s apartment, Netanyahu was in friendly territory. Boteach pitched him soft questions, like how he feels when his father is attacked in the press, and his thoughts on the movement to boycott Israel. Boteach called Netanyahu’s father “an international superstar.”

Boteach too seemed to enjoy the conversation: He pitched his books (which include “Kosher Sex”) at least five times during the 90-minute event, and peppered his questions with mentions of the time he worked at Oxford University as a campus rabbi. His Oxford stint led to a friendship with senator and presidential candidate Cory Booker, but that friendship is no more: Booker was another target of one of Boteach’s full-page Times ads.

These are not the best of times for the Netanyahu family. Benjamin Netanyahu is facing two intertwined challenges back home — a looming indictment for fraud, bribery and breach of trust, and government coalition negotiations that could see him lose the premiership for the first time in a decade.

But to hear Yair Netanyahu tell it, his father singlehandedly fixed Israel’s economy and saved it from destruction.

“It’s a mission to save the Jewish people from annihilation and to not only make them survive but also thrive,” said Netanyahu, describing his father’s job. “He took a country, back in the 1990s — besides the existential threat that it was in, it was in a horrible, pretty much Soviet-style economy, socialist, primitive economy. No exports, for example, besides, I don’t know, oranges. Very isolated in the world.”

(In the 1990s, Israel exported more than just oranges.)

“A majority of the people of Israel appreciates the tremendous change that he did in the country,” he said. “The prosperity that he brought, the best economical situation in our history, the most secure situation in our history and of course the personal relationship he has with President Trump and with other world leaders like Modi and Bolsonaro and Putin.”

The elder Netanyahu has also attacked the media, tried to do away with parts of Israel’s onetime socialist economy and warned frequently of existential threats that he says he can best combat. He too has touted his relationships with the same leaders. Earlier this year, his Likud party draped its headquarters in Tel Aviv with giant banners showing Trump and Putin shaking hands with Netanyahu.

But Yair Netanyahu sometimes goes a step further. On Wednesday night, he stated his blanket opposition to a Palestinian state in the West Bank — an idea his father opposed, then voiced support for, and now opposes again. Most recently, Benjamin Netanyahu has pledged to annex parts of the West Bank to Israel if he continues in office.

Yair Netanyahu claimed that Gaza, the coastal strip governed by the terrorist group Hamas, counts as a Palestinian state.

“They already have a state in Gaza and they have full autonomy in Judea and Samaria,” said Yair, using the biblical name for the West Bank favored by the Israeli right. “I think doing what we did in Gaza, to do it in Judea and Samaria, that would be the end of Israel.”

But the prime minister’s son gave a hard no when Boteach asked him if he has any political ambitions of his own — perhaps when his father, who just turned 70, eventually leaves office. Yair Netanyahu said he would rather continue doing events like this — speaking out on political issues without seeking elected office himself.

He appeared to be in his element, as did his host. About midway through the event, a group of protesters heckled Netanyahu for his praise of Trump.

“Yair, why do you support President Trump, who endangers Jews?” the first protester said as she was quickly drowned out by boos. Boteach relished the challenge, raising his voice, walking toward the center of the room and declaring that he was “outraged” by this brazen abrogation of Netanyahu’s freedom of speech.

But Netanyahu seemed chill. As Boteach pontificated, he leaned back in his armchair and smirked. When the rabbi later apologized for the interruption, Netanyahu said, “It’s all good.”