Life was good for the Jews of this New York suburb. Then a schoolteacher was stabbed. 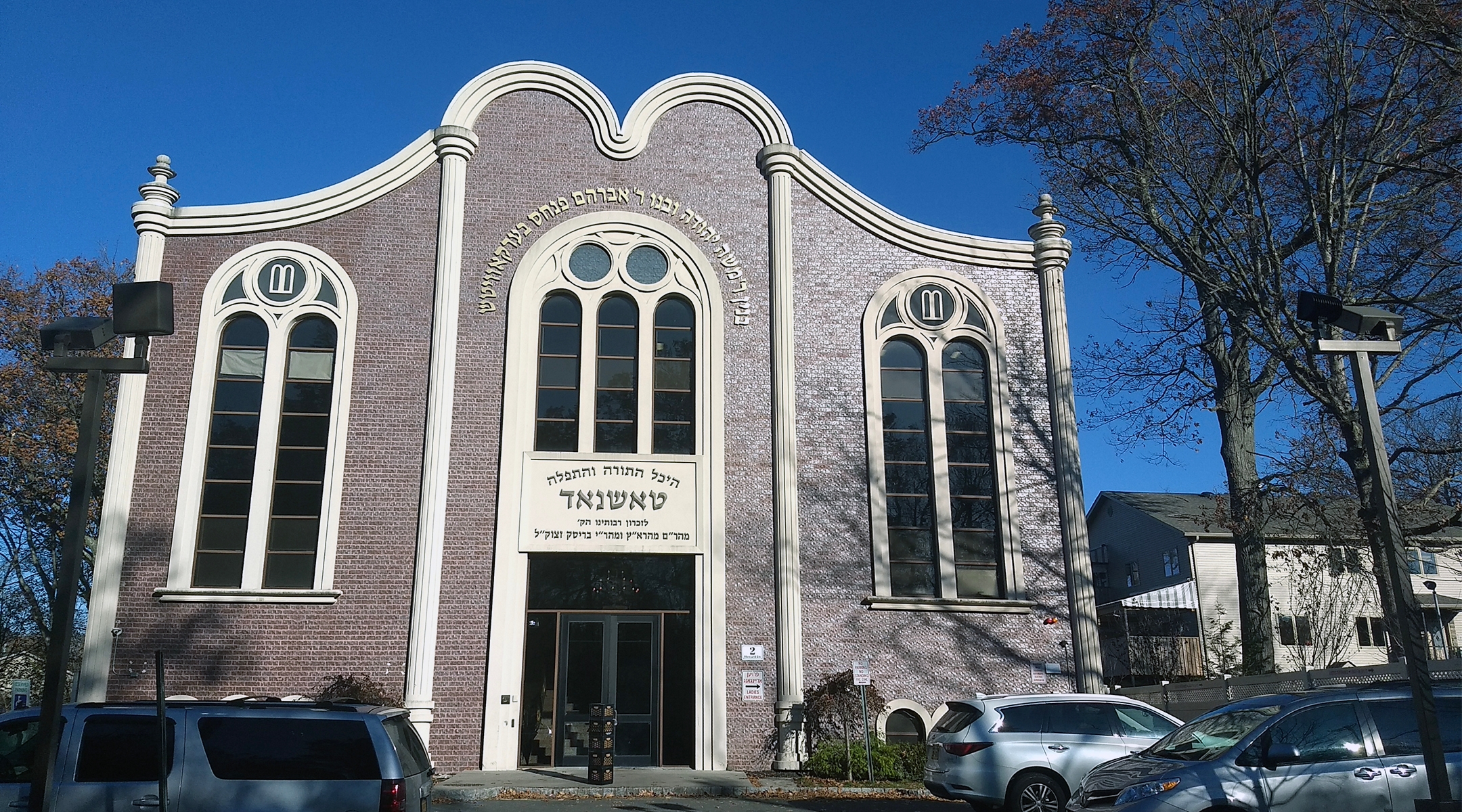 Toshnad Heichel Torah Utfila, the synagogue near where a teacher was stabbed, was active the day after the attack, Nov. 21, 2019. (Ben Sales/JTA)
Advertisement

RAMAPO, N.Y. (JTA) — On the street where a man was stabbed to within an inch of his life on Wednesday, yellow buses waited to ferry young children to elementary school.

Steps away from where his blood had splattered on the asphalt, young men shuffled in and out of a synagogue for morning prayers.

On sidewalks now being monitored by a police vehicle, parents pushed their young children in strollers through this pastoral upstate suburb.

Ramapo wasn’t supposed to be like this. Families who moved here over the past decade or so all say the same things: They came for a little more space, a little more quiet, lower housing prices than in the crowded neighborhoods of Brooklyn. There is some anti-Semitism, yes, but Jewish residents here say life, on the whole, is good.

Then, before sunrise Wednesday, an Orthodox Jew walking to morning prayers on a side street here was stabbed — again and again, his blood running over slashed clothes, until he was nearly dead. Now this community is praying for his survival and confronting the fact that the tranquil life they sought has been breached.

“It’s like, don’t go alone, see something, say something, don’t be in the street alone,” said Rivkie Feiner, a Jewish communal leader who has lived in the area her whole life. “I grew up in a place where, as a kid, people left their doors unlocked. It’s not that place anymore, but this took us to a different place altogether that we didn’t want to be in.”

The attack hasn’t yet been classified as a hate crime. As of Thursday, the perpetrator has not been caught and no motive has been determined. But the victim, who authorities have yet to name publicly, was visibly Jewish and nothing was stolen from him. The 29-year-old high school teacher, a married father of four, is in critical condition.

“He is a very good guy,” said Joel Lefkovitz, one of the victim’s students. “Every student loved him. He’s fully there for the students.”

There have been plenty of allegations of anti-Semitism in this town a half-hour northwest of Manhattan. Local governments have tried to block the construction of an enclosure that would have allowed observant Jews to carry in public on the Sabbath. A controversy over the Orthodox-controlled school board slashing funding for public schools briefly made national news in 2014. Social media pages have filled with epithets aimed at the Orthodox community. A recent video from the county Republican Party warned that Orthodox Jews were “plotting a takeover.”

“There’s a very toxic, hostile atmosphere toward Jews, but in particular toward haredi and haredi-looking Jews for the way we pray, the way we practice religion,” said Yisroel Kahan, a member of the Oizrim Jewish Council, a local leadership organization. “Which minority can I go and attack with bigoted, hateful comments like that?”

In Brooklyn, a spate of attacks against Jews in recent months has prompted a vigorous response from New York City, including the opening of an office to prevent hate crimes. But no local government in Ramapo has taken a comparable step.

Ramapo Town Supervisor Michael Specht said police patrols had been ramped up, and education and anti-bias programs would be considered.

“There’s no place for this type of crime in our community,” Specht said. 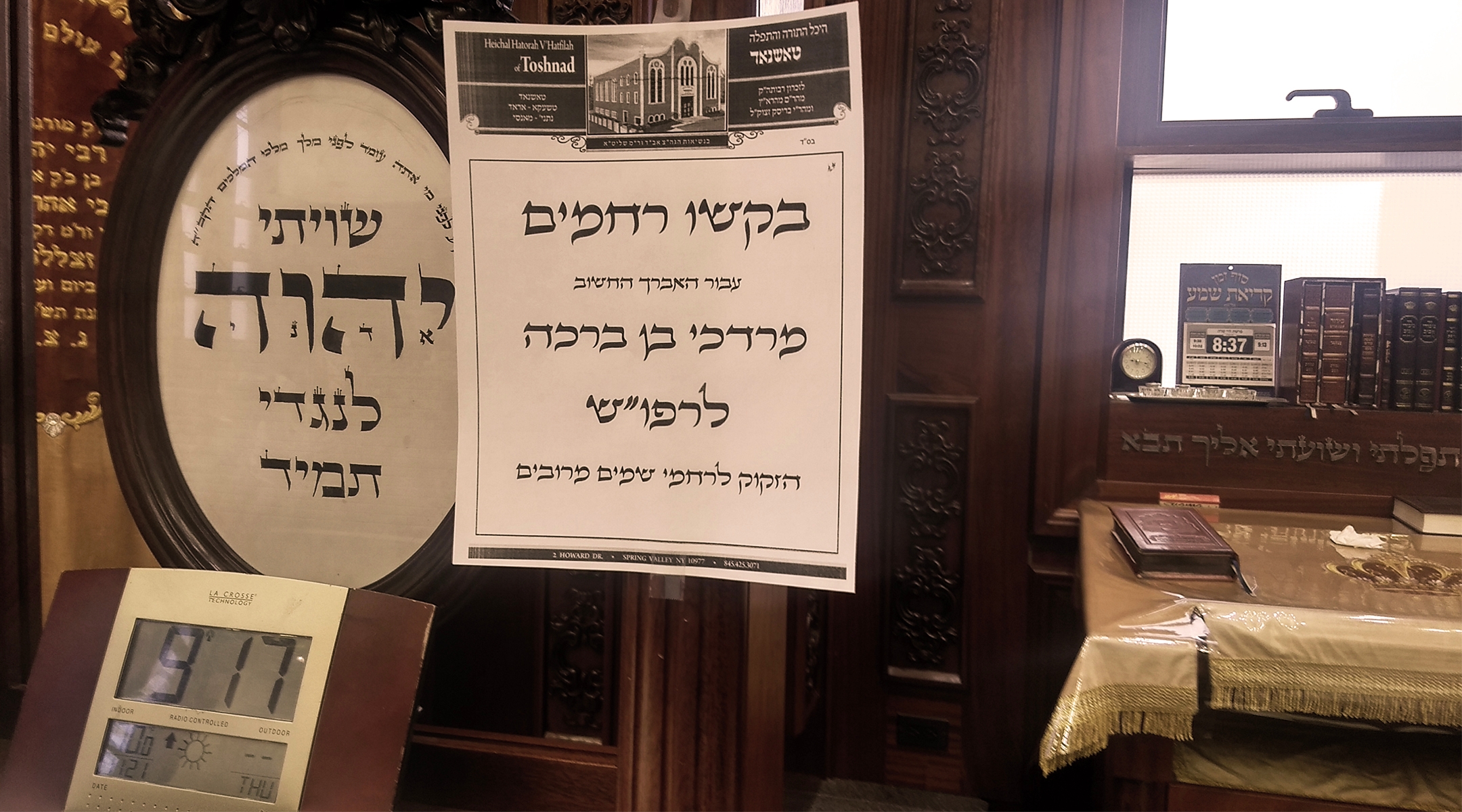 A sheet near the front of the synagogue sanctuary instructed worshippers to pray for the stabbing victim. (Ben Sales/JTA)

Residents are careful not to paint an overly dismal picture. Overall, they say their lives are peaceful and they get along with neighbors of all backgrounds. Some public officials are part of the problem, they say, but others are sympathetic. Every person who spoke to the Jewish Telegraphic Agency expressed confidence that the police are making a sincere effort to investigate the stabbing.

“People aren’t scared here at all,” said Chaim, 47, an Israeli who moved to the area 20 years ago and declined to give his last name. “Not during the night and certainly not during the day. We didn’t feel anything here. We hope it’s something that won’t happen again.”

Community members are taking their own precautions as well. The Chaverim, a Jewish volunteer force of first responders that works with local authorities, had a large white van and a black SUV parked near the site of the stabbing. Inside a nearby synagogue, a flier reminded worshippers to pray for the victim.

Two women walking outside the synagogue Thursday morning discussed how their young children, ages 13 and 11, were responding to the stabbing. Both were nervous about going outside alone in a town where children were used to moving around independently.

The women were hopeful that the victim would recover and things would go back to normal. But emotionally, they weren’t there yet.

“I have a son that goes out before 7 in the morning, and he was scared,” said one of the women, who identified herself only as Chavie. “It did make me think I’m not going to feel comfortable walking far at night anymore — for a few days at least.”