Where does Andrew Yang stand on anti-Semitism, Israel and other issues that matter to Jewish voters in 2020? 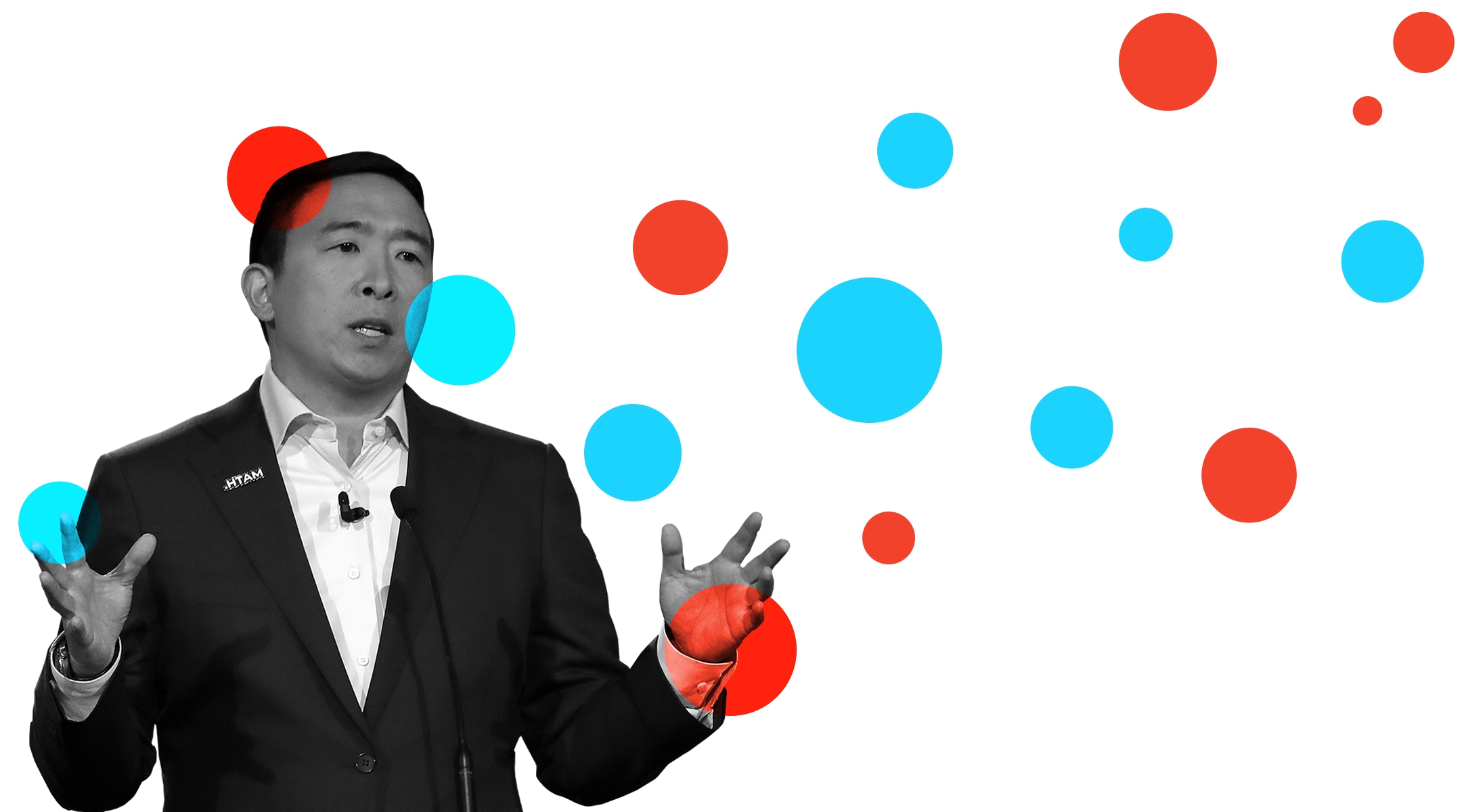 (JTA) — Andrew Yang, a former tech executive, has never held public office. But that hasn’t stopped him from running the most successful dark horse campaign of the election cycle.

His platform is based around creating a universal basic income — giving every American citizen over the age of 18 $1,000 per month, in place of other welfare programs. His “Freedom Dividend” proposal has ignited debate and made him a favorite among many, especially young people, looking to shape up the economic status quo.

Yang has no experience in government, which makes figuring out where he stands on Jewish issues more challenging. However, there is one Jewish issue Andrew Yang has made headlines for:

Andrew Yang is against circumcision.

At one point he said he would “incorporate that view into public policy,” according to The Daily Beast.

“It’s sort of pushed on parents in many situations,” Yang said, calling circumcision a “cultural onus.”

“From what I’ve seen, the evidence on it being a positive health choice for the infant is quite shaky,”  he added.

This makes Yang an “intactivist” — one of those who advocate for keeping penises “intact,” as they like to say, or uncircumcised.

Despite this, doctors say that the benefits of circumcision outweigh the risks.

An anti-circumcision policy would greatly impact the Jewish community: a bris, or brit milah, is the Jewish ritual of circumcision usually performed on the eighth day after a baby boy is born, and a sign of entering into the Jewish covenant.

After a backlash, Yang seemed to walk back his statements, tweeting that he would not pass a universal policy on circumcision.

“I support the freedom of parents to adopt circumcision for any religious or cultural ritual as desired. Actually have attended a brit milah myself and felt privileged to be there… Always up to parents.”

Still, he never said he would end his anti-circumcision advocacy.

Besides the circumcision controversy, has Yang waded into other waters that Jews should be concerned about?

Oddly enough, Yang is a bit of a “hit” with the “alt-right.”

For one thing, some of them applauded his comments on circumcision. But as The Verge reported in March, Yang has a following on forums on the site 4chan that are full of anti-Semitic memes.

Yang has strongly denounced this form of support.

“I denounce and disavow hatred, bigotry, racism, white nationalism, anti-Semitism and the alt-right in all its many forms. Full stop. For anyone with this agenda, we do not want your support. We do not want your votes. You are not welcome in this campaign,” he said in a statement to The Verge.

What else has Yang said about anti-Semitism?

He tweeted support for Jews in the aftermath of the Pittsburgh synagogue shooting.

“I know it’s true for everyone but I feel terrible and terrified for my Jewish friends. So many have lost family members to violence and anti-Semitism. It hits home for them like for very few others because of their history of persecution. Imagine having your worst fears realized,” Yang tweeted.

I know it’s true for everyone but I feel terrible and terrified for my Jewish friends. So many have lost family members to violence and anti-Semitism. It hits home for them like for very few others because of their history of persecution. Imagine having your worst fears realized.

But further along in that same Twitter thread, he went on to push for universal basic income, saying that it would “decrease economic and social tensions” and potentially help to stop violent shootings.

“Economic stress adds to social polarization and violence,” he said. “If you’re walking around worried about how to survive month-to-month you are more likely to lash out and respond to hateful messages and ideas.”

On Yang’s blog, he expanded on his plan to fight anti-Semitism, with the help of UBI.

“Would a Universal Basic Income have prevented the violence in Pittsburgh?  Perhaps not – but I believe it would have a better chance of preventing the next one than just about anything else we could do. And yes, that includes thoughts and prayers.”

What does Yang say about the movement to boycott, divest from and sanction Israel — commonly referred to as BDS?

Yang has not specifically addressed BDS.

What about relationships with Jewish groups?

Yang hasn’t appeared with any, though he did submit a minute-long video message to J Street.

There is also a “Jews for Andrew Yang” Twitter account. As of this writing, it has just under 3,000 followers.

Does he have a foreign policy with regard to Israel?

Not a very detailed one, but he has come out in favor of a two-state solution.

“The only acceptable end to the Israeli-Palestinian conflict involves a two-state solution that allows both the Israeli and Palestinian people to have sovereign land and self-determination,” Yang told the Council on Foreign Relations.

“I don’t want to prescribe the specifics of a two-state solution, as the Israeli and Palestinian people both need to be leading any conversation, and I look forward to engaging with all stakeholders to come up with confidence-building measures, such as a ceasefire and an end to the expansion of settlements, as we look towards building a sustainable peace.”

Where does he stand on aid to Israel?

In March, Yang acknowledged to voters in Cedar Rapids, Iowa, that he did not know enough about aid generally to pronounce on aid to Israel. “I’m not going to get into the specifics of foreign aid,” he said when asked about the annual defense assistance Israel gets. “It could be the $3.8 billion in the context of money we give to other countries is appropriate.”

“In terms of the money we are giving to an ally like Israel, my first instinct would be like, why would we reduce it, you know?” Yang said, speaking off-the-cuff at a meeting in Plymouth, New Hampshire.

In his video to J Street’s 2019 conference, Yang said that under his administration, “aid to Israel and Gaza would continue, and also, aid to Palestinians under U.S. Aid would be restored.”

In Yang’s corner — or part of the “Yang Gang,” we should say — is Sam Altman, a Silicon Valley investor who last month threw a fundraiser for him. Altman has experimented with supporting universal basic income. In a 2016 New Yorker profile, Altman joked about how his younger brothers urged him to run for president. “Let’s send the Jewish gay guy!” Altman said. “That’ll work!”