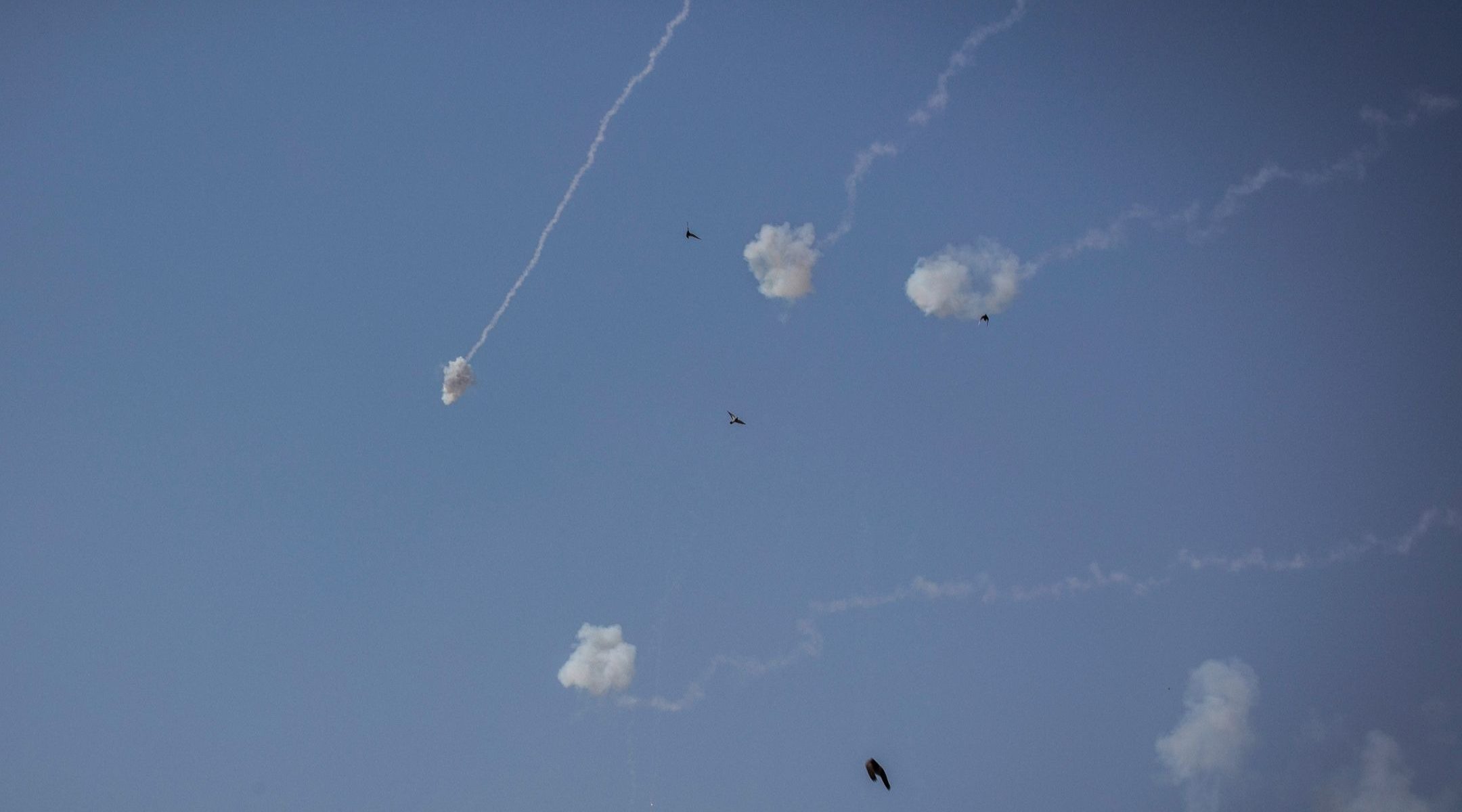 The Iron Dome missile-defense system intercepts rockets that were fired from Gaza, Nov. 13, 2019. Congress is approving funds to continue financing this and other anti-missile systems. (Ilia Yefimovich/picture alliance via Getty Images)
Advertisement

WASHINGTON (JTA) — If where you spend your money is the clearest sign of your priorities, Congress seems to be saying that it remains invested in Israeli-Palestinian peace and in robustly supporting Israel’s defense systems.

The House of Representatives threw its support this week behind a spending package that restores support for what have long been considered key planks upholding an eventual two-state solution to the Israeli-Palestinian conflict. The Senate is expected to likewise approve the bills.

The $1.3 trillion spending package includes $75 million in humanitarian aid for the Palestinians and the same amount for Palestinian security services. Palestinians once could count on hundreds of millions of dollars in annual support from the United States, but that figure dropped to zero after President Donald Trump signed a law last year that made it difficult for them to accept American aid.

The bill also provides $30 million to fund personal exchanges, including between Israelis and Palestinians, effectively restoring $10 million in annual funding for such programs that Trump eliminated in 2018. (Peace activists have been told that Israeli-Palestinian dialogue will get no less than $10 million of the $30 million.)

Nowhere mentioned in the bills is the $175 million that Jared Kushner, Trump’s senior adviser and son-in-law, had sought for a “peace fund” that would seed money for cooperative ventures to spur businesses in the Palestinian areas.

Taken together with the recent endorsement of a two-state solution to the Israeli-Palestinian conflict passed by House Democrats with some Republican support, the spending bills appear to send the message that the two-state solution still has support in the U.S. government — at least in Congress.

The Trump administration, along with the government of Israeli Prime Minister Benjamin Netanyahu, has retreated in recent years from that vision, which had been the official policy of both countries, not to mention the consensus opinion of the international community. Earlier this year Kushner, who has been one of the administration’s key architects of a still-unreleased Middle East peace plan, explained why he no longer wanted to use the term “two states.” Trump himself has said he’s agnostic on whether the ultimate goal of peacemaking is one state or two.

Foreign aid to the Palestinians dried up after Trump signed the Anti-Terrorism Clarification Act into law last year. The act brought relief to victims of terrorism frustrated that American courts would not advance their lawsuits against Palestinian organizations, but it did so by declaring that once a Palestinian entity accepted U.S. aid, that entity was subject to American tort law and its assets could be delivered to the victims. That led Palestinian officials to declare they could no longer accept U.S. funds.

The decision barely mattered at the time, as Trump was ending virtually all humanitarian aid to the Palestinians in any case. But it posed challenges to lawmakers seeking to restore U.S. support.

The $150 million is a fraction of the $400 million per year Palestinians received from the Bush and Obama administrations, but it represents Congress’ return to the fray — albeit with a caveat. If the Palestinian Authority gives money to a terrorist or the family of a terrorist, its funds are subject to tort law.

But by re-establishing a relationship between the U.S. State Department, which disburses the aid, and the Palestinian Authority, which receives it, Congress is reaffirming the bilateralism that would be a predicate to U.S. relations with a future Palestinian state.

The $10 million in funding for efforts to build relationships between Israelis and Palestinians focuses on promoting the two-state outcome from the grassroots. The Alliance for Middle East Peace, an umbrella group that led lobbying for the funding, in a statement referred pointedly to “cross-border” funding in “Israel and Palestine” — a reminder that two states is the preferred outcome of peace activists.

A key player in the restoration was Rep. Nita Lowey, D-N.Y., the retiring chairwoman of the Appropriations Committee. Lowey has long been a stalwart of pro-Israel politics and, more recently, led the fight to preserve the two-state option. She was ferocious in advocating for the people-to-people funding, even pushing the American Israel Public Affairs Committee, a group with which she has a long association, during a hearing to back the funding.

Lowey was instrumental as well in getting the House to increase support for a program that has funded security for Jewish facilities by 50 percent, to $90 million from $60 million.

Also this week, in a separate budget bill, Congress approved $500 million for Israel’s anti-missile and anti-tunnel defense programs. Normally this wouldn’t be noteworthy, as the pro-Israel community typically gets exactly what it seeks from Congress. But the funding approval comes in the face of threats by some leading Democratic presidential candidates to withhold some of the $3.8 billion in annual defense assistance pledged to Israel by President Barack Obama to leverage concessions from the Jewish state.

Sen. Bernie Sanders of Vermont has said he would divert some of the money to support humanitarian aid to Palestinians in the Gaza Strip. Mayor Pete Buttigieg and Massachusetts Sen. Elizabeth Warren have been vaguer, but both have indicated a willingness to use aid to pressure Israel.

The National Defense Authorization Act cleared the House last week and was endorsed Tuesday by the Senate.

Anti-missile technology has been proven effective in repelling the short-range missiles fired into Israel from the Gaza Strip. Also funded is longer-range anti-missile systems that could be used to defend against missiles fired by Iran or its Lebanese ally, Hezbollah.

The act also budgets $25 million for anti-drone technology and extends cooperation on anti-tunnel technologies seen as critical not only to stopping Hamas and Hezbollah incursions across Israeli borders, but human and drug traffickers working the U.S.-Mexico border.

Still under consideration is legislation that would codify the full $3.8 billion.

AIPAC celebrated the missile defense as a key bipartisan win.

“These critical provisions will help Israel protect itself against mounting security threats,” it said in a statement.