(JTA) — When Adam Sandler was shut out of this year’s Academy Award nominations for “Uncut Gems,” the Oscars lost out on the chance to have an acceptance speech as hilarious as the one Sandler delivered Saturday at the Independent Film Spirit Awards.

But this year’s Oscars had some pretty wonderful Jewish moments nonetheless. Here’s a roundup.

Waititi, 44, took home the Oscar for Best Adapted Screenplay for “Jojo Rabbit,” his first Oscar win and the first ever by an Indigenous director. Waititi’s “anti-hate” satire about a boy who has Adolf Hitler as an imaginary friend, was up for six awards, but Waititi’s win was the only one for the film.

The director dedicated the award to “all the Indigenous kids in the world who want to do art and dance and write stories. We are the original storytellers and we can make it here as well.” Waititi’s father is from the Te Whānau-ā-Apanui, a Māori tribe. 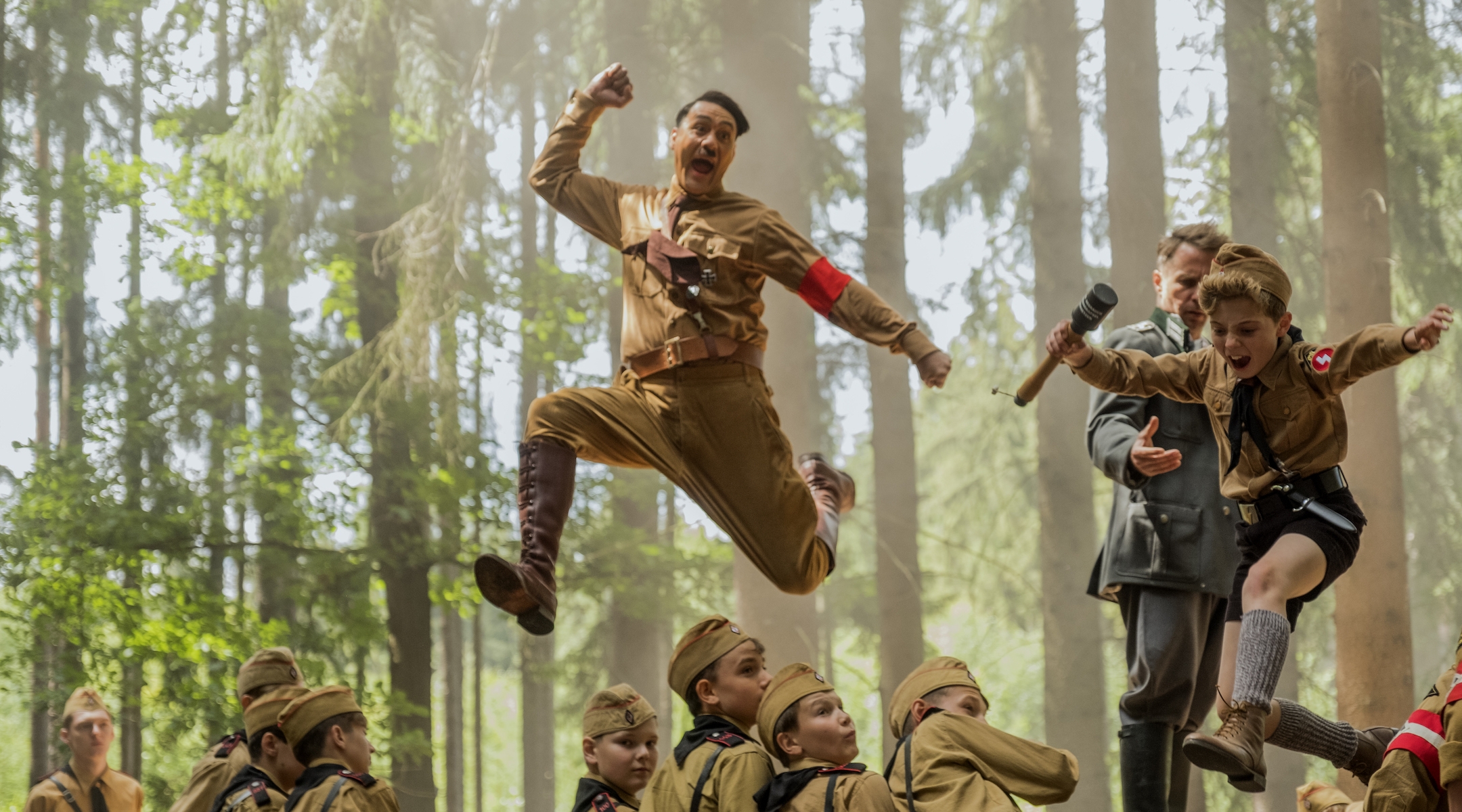 He also shouted out his Jewish mom: “Thank you for being my mother, and for many other reasons, but for giving me the book that I adapted. This film wouldn’t have existed without you doing that.”

Waititi’s mom, Robin Cohen, told her son to read “Caging Skies” by Christine Leunens — the story that Waititi adapted into his satirical film.

“Today, we know Hitler as the evil madman who engineered the torture and murder of millions of people,” Cohen told Variety. “But if we don’t think more deeply about how he convinced half the world to help him, we leave the door open to a repeat performance. When Taika depicts him as the affable hero of a small boy’s imagination, our idea of Hitler is skewed like a needle scratching across a record. This imaginary Hitler reminds us of an uncomfortable reality — that in the right climate, what we come to imagine can be deadly.” 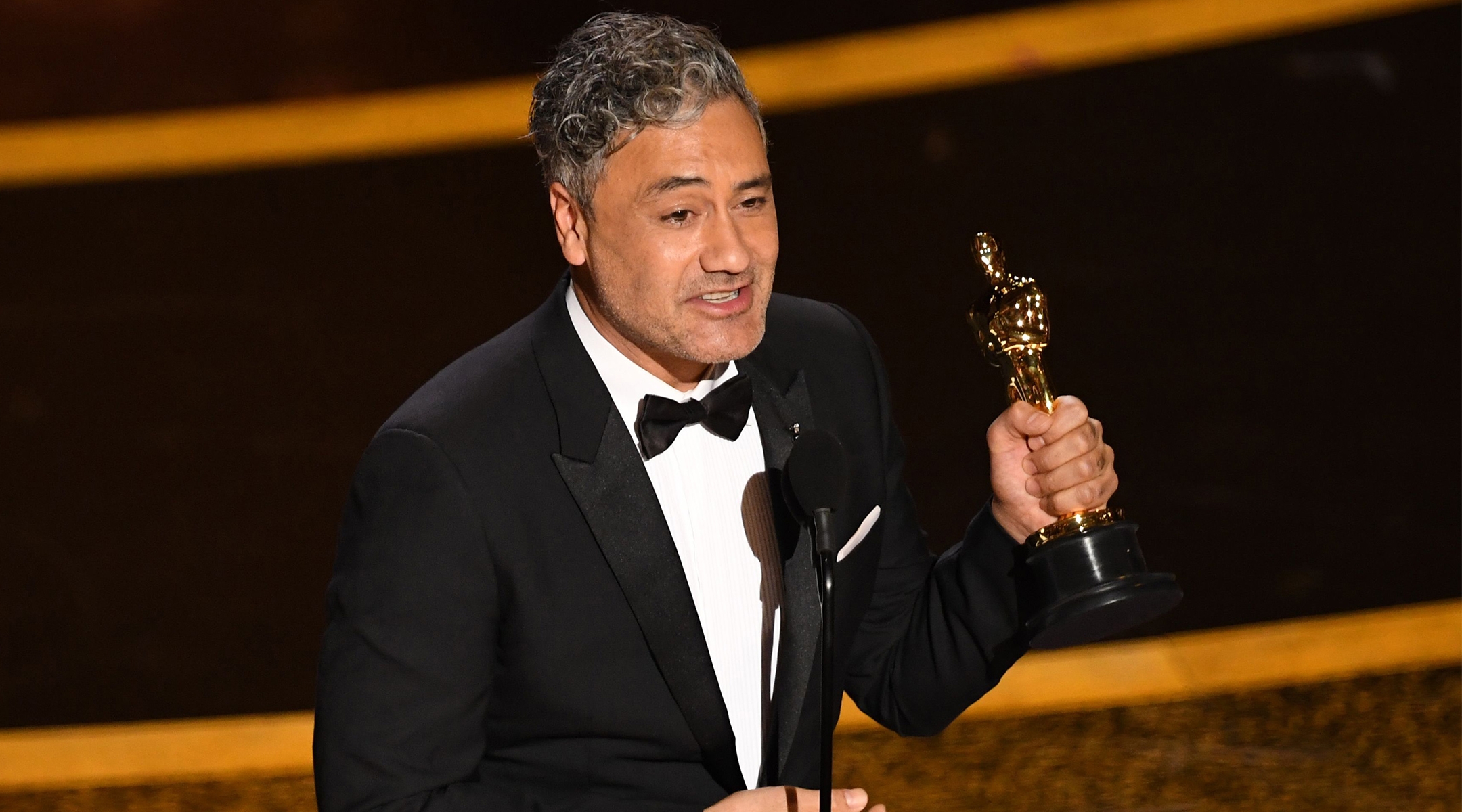 In the press room after winning, Waititi echoed his mother’s sentiment on the prescience of the film. He said he made the film in response to a “resurgence of hate and intolerance and hate speech.”

“At the end of the war, there was a very clear rule: if you were a Nazi, you went to jail. Now, the rules have changed a bit: if you’re a Nazi, feel free to have a rally down in the town square and you can invite all your mates. So, something’s changed and something’s not right.”

#JoJoRabbit director Taika Waititi says he doesn't understand why Nazis are allowed to hold rallies these days when they used to be thrown in jail #Oscars https://t.co/tU5RoHIcJU pic.twitter.com/7fHAVjazIO

Idina Menzel, the voice of Elsa in “Frozen” (and its sequel) performed the Oscar-nominated song “Into the Unknown” with backup performers from around the world.

The Jewish mom was introduced by her Jewish “Frozen” co-star, Josh Gad, who made a point to pronounce her name correctly, saying, “the iconic and brilliant Idina Menzel, pronounced exactly as it is spelled.” (A dig at John Travolta, who could not pronounce her name at the 2014 ceremony.)

Natalie Portman embroidered her Dior cape with all of the female directors who weren't nominated for #Oscars. Check out her explanation here. pic.twitter.com/kyyo2wVMZf

Israeli director Alma Har’el, who was included on the dress, tweeted: “My first time at the Oscars couldn’t have been more beautiful.” Later in the night, Har’el also tweeted her enthusiasm for Bong Joon Ho, the South Korean director whose “Parasite” became the first-ever non-English language film to win Best Picture.

Portman and Chalamet were among several Jewish celebrities to be part of the host-less awards show. Beanie Feldstein, Gal Gadot, Steven Spielberg and Maya Rudolph also got to hand out prizes.

#Oscars Moment: @MayaRudolph and Kristen Wiig can do it all. pic.twitter.com/44yWPGJYNv

Waititi also returned to honor the indigenous populations of Southern California, acknowledging the Tongva, the Tataviam and the Chumash people who lived in what is now Los Angeles: “We acknowledge them as the first peoples of this land on which the motion pictures community lives and works.”

Not during the show, but…