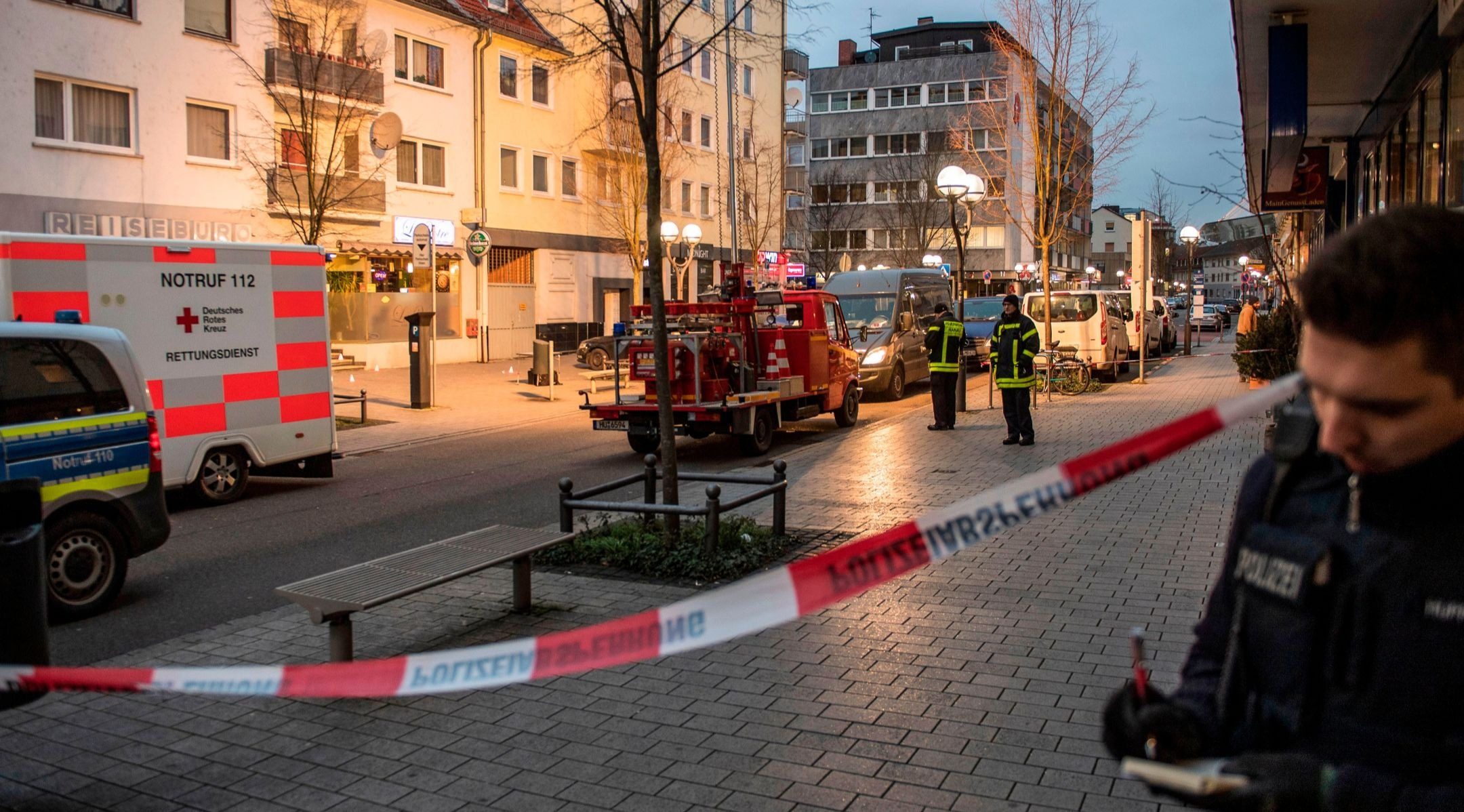 Police officers and emergency services behind a police cordon near two hookah bars in the center of the western German city of Hanau after 10 people were killed in shootings, Feb. 19, 2020. (Thomas Lohnes / AFP via Getty Images)
Advertisement

BERLIN (JTA) – The shooter who murdered 10 people in the German city of Hanau was a far-right extremist who reportedly said he wanted to exterminate people from Asia, North Africa and Israel.

Police in Hanau said the shooter, identified in news reports as Tobias R., born in 1977, and his mother were found dead early Thursday morning in his home, not long after his reported shooting spree in two hookah bars. Among the dead were several Turkish nationals, as well as one Bosnian and one person from Poland.

The alleged shooter left behind a video and a 24-page manifesto in which he said certain peoples “must be completely destroyed,” according to German news reports. A spokesperson for the attorney general told the Jewish Telegraphic Agency that he could not confirm the existence of a manifesto or video, but that further information would be released later on Thursday.

The attack is the latest in a string of high-profile attacks by far-right extremists in recent months. Both the Yom Kippur attack on a synagogue in Halle last October and the assassination in June of a pro-refugee politician, Walter Lubcke, were carried out by assailants affiliated with the far right.

Responding to those attacks, German officials have said they are ramping up scrutiny of far-right groups. But they are seen as playing catch-up after years of focusing anti-terrorism efforts largely on Islamic extremists.

In a statement Thursday morning, Josef Schuster, head of the Central Council of Jews in Germany, said he worried about “the safety of minorities in Germany, and of those who are committed to helping them.”

Schuster and other prominent German Jews have said recently that an uptick in right-wing crimes and the rise of a far-right extremist political party, the Alternative for Germany, had made them consider leaving Germany.

The German media said the manifesto was written in January and intended as a “message to the German people” and a declaration of war. Their unconfirmed reports state he blamed “certain individuals in my own country” for the fact that “we now have populations, races or cultures amongst us that are destructive in every way.”

Tobias R. also reportedly had posted a video on YouTube last week containing conspiracy theories about secret powers steering both the United States and Germany, and expressions of hate aimed at Arab and Turkish migrants.

Police did not know of any specific threats to Hanau’s Jewish population, Oliver Dainow, representative for the Jewish community there, told JTA on Thursday morning.

The community, with some 200 members, already had beefed up security following the violent attack outside the synagogue in Halle. Two passersby were killed in the attack. The alleged perpetrator, who had tried and failed to break his way into the synagogue, was later arrested.

“For anybody who has these kinds of ideas in their head, Judaism is not far away,” Dainow told JTA.

While the most recent violent attacks have had a right-wing extremist background, Dainow said he could not point to one specific political direction as being most threatening.

“There is a toxic environment in general,” he said.

In his statement, Schuster said German authorities had ignored warning signs for far too long.

“It is high time that all democratic entities stand together against the threat of right-wing extremism and also of Islamist terror,” he said. “Politicians, law enforcement agencies, the judiciary and civil society have to take responsibility.”

German Chancellor Angela Merkel, who canceled travel plans in the wake of the Hanau shooting, said Thursday in a public statement: “Racism is a poison. Hatred is a poison. And this poison exists in our society and is responsible for far too many crimes.”