Bernie’s campaign may be nearing its end, but he’s keeping Israel policy on his Democratic agenda 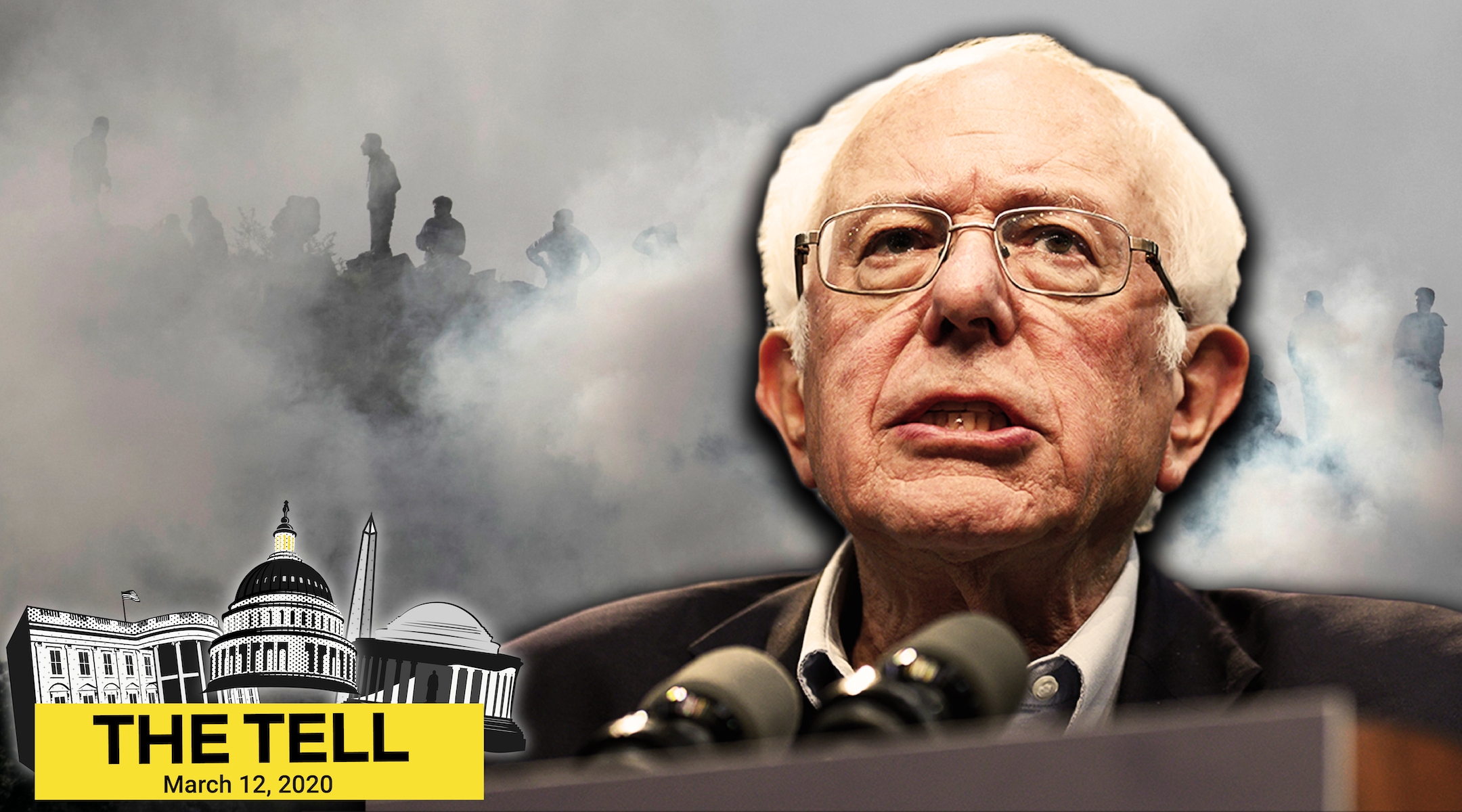 WASHINGTON (JTA) – Bernie Sanders lost big for the second set of Democratic primaries in a row, including in Michigan, where his 2016 win made him a viable candidate. At a news conference Wednesday, he all but conceded the presidential nomination contest to Joe Biden.

So is it bye-bye Bernie? Probably sooner rather than later. But the Vermont senator’s ideas, including his sharp criticisms of decades of U.S. Israel policy, are not about to leave the Democratic arena.

“While our campaign has won the ideological debate, we are losing the debate over electability,” Sanders said at the news conference. He said he keeps hearing from folks who like his ideas but will vote for Biden because they believe he’s the best bet to beat Trump. (We heard the same when we spoke to Jewish Democratic Michiganders on the eve of the primary.)

“Needless to say, I strongly disagree with that assertion,” Sanders said. “But that is what millions of Democrats and Independents today believe.”

Sanders seems more ready to work with Biden than he was with Hillary Clinton in 2016. On Wednesday night, he told Jimmy Fallon on “The Tonight Show” that he thought the former vice president could defeat Trump — a case he didn’t make for Clinton until late in the summer of that election.

If Sanders is staying in it for now, it’s to make the case to “my friend Joe Biden” for his ideas, starting on Sunday when the two candidates meet in Washington, D.C., for a debate that was moved from Phoenix. At the news conference, the self-described democratic socialist outlined nine areas in which he would nudge the veteran centrist, including universal health care, criminal justice reform and the income gap.

All were domestic issues, but that doesn’t mean foreign policy will be ignored in the coming months.

Keeping Israel on the agenda: Platform battle, the sequel

That was clear on Wednesday when IfNotNow, the Jewish anti-occupation group, coordinated the release of its endorsement of the Vermont senator with the Sanders campaign.

“Peace means security not only for every Israeli, but also for every Palestinian,” Sanders said in a tweet pitching IfNotNow’s four-minute video, which was principally about Sanders’ support for the two-state solution, the end of Israel’s occupation of the West Bank and the end of the blockade of the Gaza Strip. “I’m proud to have the support of @IfNotNowOrg.”

That means we can likely expect a repeat of the 2016 battle over the Democratic Party’s official platform, when Sanders named three prominent Israel critics to the platform committee who endeavored to get into the platform language that explicitly criticized Israel’s occupation. They failed, but the wounds from the charged exchanges on the committee lasted: Cornel West, one of the people Sanders named to the committee, was so disgusted with the process that he said he could not vote for Clinton.

Bakari Sellers, a former South Carolina legislator who is now a CNN commentator and is close to the centrist pro-Israel community, tried last week to reassure activists at the AIPAC policy conference that the platform would remain the same.

“I’m back on the platform committee again this year, and I anticipate a very pro-Israel platform again, I have nothing that shows me otherwise,” he said.

“We will take great solace in the fact that — and look for your leadership on that committee,” said AIPAC’s political director, Rob Bassin.

Their optimism might not be well-founded: In addition to the IfNotNow video, there are other signals that the issue is not going away. Opponents of Israel’s West Bank policies sense greater urgency this election cycle than in 2016, in part because the Trump administration, in its just-released “peace vision,” gave Israel a green light to annex parts of the West Bank.

This cycle, J Street, the liberal Jewish Middle East policy group that remained on the sidelines last time, has signed onto changing the platform to include calls to end the occupation, and it has aggressively recruited the like-minded. Its college affiliate, J Street U, has signed up multiple campus Democratic Party chapters to endorse the changes, and an array of more than 230 rabbis of all religious streams have also signed on.

Matt Duss, in 2016 a think-tanker focused almost exclusively on advancing the two-state solution and ending the occupation, argued then as a guest witness for including the anti-occupation language in the platform. This time Duss is very much on the inside as Sanders’ top foreign policy adviser, and will likely be on the platform committee.

Rep. Ro Khanna, D-Calif., one of Sanders’ top congressional endorsers, told me that he expects the anti-occupation language to make the platform.

“It’s very important that the issues of Palestinian rights and human rights and the shared security of Israel and Palestine be part of a Democratic platform,” he said in an interview. “We should be opposed to new settlements and make sure that there is a recognition of halting any expansion into areas that would make peace much harder to achieve.”

Going for the Jews

Sanders, who is Jewish, has posted three videos on his Twitter feed over the last week aimed squarely at young Jewish voters.

In addition to the IfNotNow video, he posted a 4-minute video by Jews for Bernie, which includes his call to condition aid to Israel, and a 2-minute video by comedian Sarah Silverman, who begins, “Bernie is my kind of Jew, you know?”

Trump in the time of coronavirus: President Donald Trump was going to speak to a Republican Jewish Coalition conference in Las Vegas that would have packed 3,000 people into a casino ballroom as the coronavirus spreads in leaps and bounds — until at the last minute he was not. After Trump canceled his appearance, the RJC canceled the entire conference.

Berning bridges: The Sanders campaign takes on as an adviser a man who called Zionism “racist” and denounces a Sanders rally speaker who has in the past lumped ISIS and Israel together as allies.

What’s in a name: In its latest human rights report released Wednesday, the State Department calls Palestinians in Jerusalem “Arab residents” or “non-Israelis,” which appears to be of a piece with the administration’s recognition of Jerusalem as Israel’s capital. But the report does not stint on some criticisms of Israel, including allegations by NGOs of torture of Palestinians. It also described as “credible” building permit discrimination against Palestinians in Jerusalem and reports of Israel denying Palestinian juveniles legal counsel.

Biden gets Giffords: Gabrielle Giffords, the Jewish Democratic congresswoman who an assailant shot in 2011 and who founded a gun control group, this week endorsed Joe Biden for president. “After I was shot, Joe was there for me,” she said in a tweet. “And he’s always been there for the gun safety movement.”

Giving Rosenwald his due: A bill authored by House Democratic Reps. Steve Cohen of Tennessee and Danny Davis of Illinois would establish a national park to honor Julius Rosenwald, the philanthropist who established schools throughout the South to remedy the afflictions of segregation. This week the Natural Resources Committee advanced the bill. “Julius Rosenwald was a visionary philanthropist whose altruism and philosophy of giving embodied the Jewish concept of tzedakah – social justice and charity,” Cohen said. “He partnered with African American communities across the South to help build schools for children with limited access to good public education.”

Hannah Brown at the Jerusalem Post examines the eerie parallels between the 2013 dystopian movie “World War Z” and how Israel is handling the coronavirus in real time. She also lists contagion movies you can watch while you’re in self-quarantine, which to me is kind of like watching “Titanic” on, well, the Titanic.

Ron Kampeas
Ron Kampeas is JTA's Washington Bureau Chief. He worked previously at The Associated Press, where he spent more than a decade in its bureaus in Jerusalem, New York, London and, most recently, Washington. He has reported from Northern Ireland, Afghanistan, Bosnia and West Africa. While living in Israel, he also worked for the Jerusalem Post. He has won two Rockowers, Jewish media’s premiere journalism award, in 2010 for best personality profile for his obituary of William Safire, and in 2013 for excellence in blogging. He has led JTA’s political coverage of every election since 2004. Over his career he has interviewed a diverse array of personalities including Yehuda Amichai, Barack Obama, Olivia Newton John, the Taliban’s education minister and the Wiggles.
The views and opinions expressed in this article are those of the author and do not necessarily reflect the views of JTA or its parent company, 70 Faces Media.