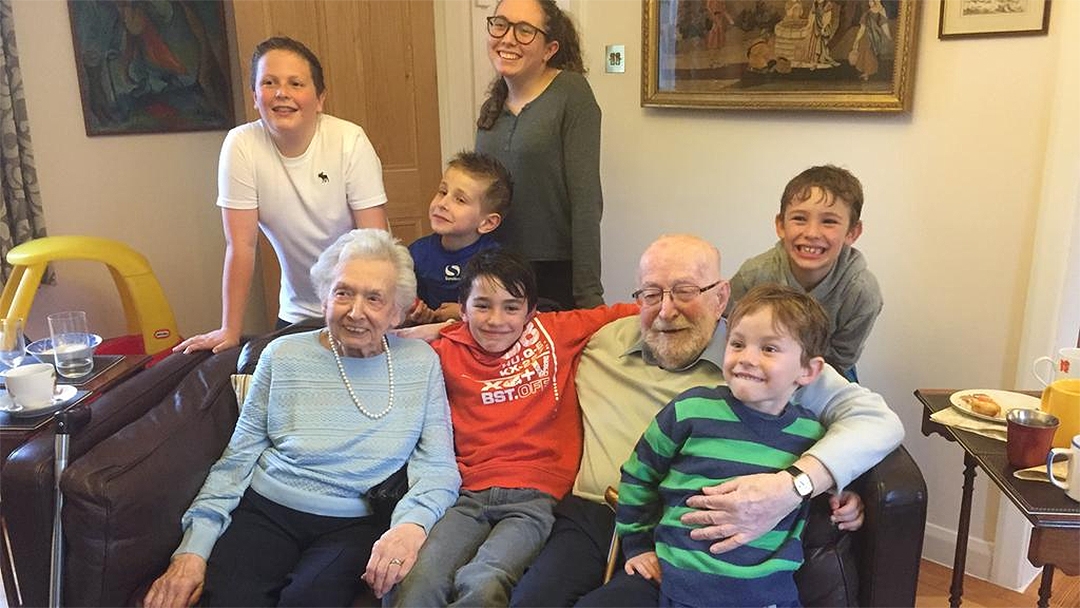 Ronald David Bayfield, his wife, Sheila and their great grandchildren in 2017. (Courtesy of the Bayfield family)
Advertisement

(JTA) — In 1944, Ronald David Bayfield dragged himself out of a burning tank and, despite suffering severe burns, carried a wounded comrade on his shoulders back to Allied territory.

That act of valor during the invasion of Normandy earned Bayfield the admiration not only of the man he saved, but also of the many men with whom he fought the Nazis.

And yet it was also the source of the only regret that Bayfield ever shared with his son, Rabbi Tony Bayfield. To his dying day, Bayfield regretted that the injuries he suffered in 1944 prevented him from joining his unit, the 23rd Hussars regiment, when it helped liberate  the Bergen Belsen concentration camp in northern Germany.

Bayfield died of the coronavirus in London on Sunday, March 29. He was 95.

Ronald David Bayfield, his wife, Seila and their great grandchildren in 2017. (Courtesy of the Bayfield family)

Born in east London to a Jewish family, Ronald David — or Ron, as his friends called him — was the middle child. He met his wife, Sheila, at an Orthodox Jewish elementary school when they were both 7. They were married for 76 years.

An outstanding student, Bayfield secured a prized spot at the prestigious Royal Liberty Grammar School, but the war cut short his education at the age of 16. During his first military parade, he broke protocol by adding the word “Jew” to his personal number and last name when it was his turn to step up.

Bayfield eventually became a teacher, devoting his professional life to helping teenagers with learning impediments realize their potential. He focused on boys in the most materially deprived areas of London, his son said. He also ran evening classes for teenagers in east London.

Bayfield retired at the age of 64. He and his wife never expected to live another 30 years, which put an unexpected burden on the family.

“All their plans – for instance to be able to leave money to their sons – were confounded. And a long, slow process began – perhaps accelerated by dad’s triple bypass operation – of withdrawal into a smaller, more sedentary lifestyle. It eventually brought about a growing dependence on others, which both Sheila and Ron deeply resented. And when dad suffered a stroke eight years ago, he was never quite the man he was, ” Tony Bayfield said.

But Ron Bayfield’s tenacity remained with him to his last breath. His mobility severely diminished and living at a Jewish old age home, he insisted on going to the bathroom on his own, his son recalled.

“I remember being with him and trying to stop him by blocking his way until a nurse arrived,” Tony Bayfield recalled. “Shamefully, I shouted and he finally said to me: ‘You don’t understand. This is about my self-respect and I’m not going to give that up.’”

Bayfield is survived by his wife and five grandchildren — one of whom, Miriam Berger, is a rabbi at Finchley Reform Synagogue and officiated at his funeral, which she livestreamed to other family members because of bans on gatherings due to the pandemic.

“Ron’s death is not a tragedy,” Tony Bayfield said, referencing his father’s 94 good years. But it did have a tragic element.

“That Ron should have had to die alone – wonderfully cared for under impossible circumstances at Northwick Park Hospital – but without mum at his side or anyone to hold his hand is unutterably painful,” Tony Bayfield said.