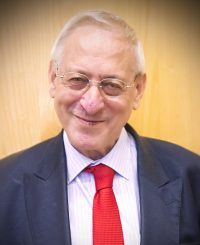 (JTA) — When Rabbi Yitzchak Schochet became rabbi of London’s Orthodox Mill Hill Synagogue in 1993, he entered into a congregation rich with communal leaders. Among them was Michael Goldmeier, a man once described by the head of the British chief rabbi’s office as “one of the most prominent members of Anglo Jewry.”

Schochet set up a think tank that included Goldmeier along with, among others, Michael Levy, a Labour peer in the House of Lords and Tony Blair’s former envoy to the Middle East. “We met once every other month to discuss and strategize how to take the community forward,” Schochet once said. “Essentially it served as the catalyst that enabled the growth of Mill Hill to [where] it is today.”

Goldmeier died over the weekend of April 4-5 of the coronavirus. He was 73.

A lawyer who went on to serve as an immigration judge, Goldmeier was a pillar of Jewish communal life in England. He was deeply involved with Mill Hill, serving as the synagogue’s warden and later its chairman. He also served on the board of governors of two Jewish day schools and was involved in the founding of the Jewish Leadership Council, an umbrella group of major British Jewish groups. He was an honorary officer of the Orthodox United Synagogue movement, and for five years was the chair of Jewish Care, the largest provider of health and social services among British Jewry.

Goldmeier “was someone who exemplified faith,” Schochet said in remarks at the funeral that he shared with JTA.

“[Synagogue] services had to conform to the [train] schedule,” Schochet recalled. “He became quite friendly with many of the station managers and directors. When trains were out-of-sync, they knew they could expect him to turn up.”

Levy considered Goldmeier one of his closest friends. In his eulogy, Levy called him “the most honest, honorable, and principled man that it has been our privilege to have known for so many years and to have had such a close and special friendship with for nearly 50 years.”

Friday nights, Levy said, will never be the same without him.