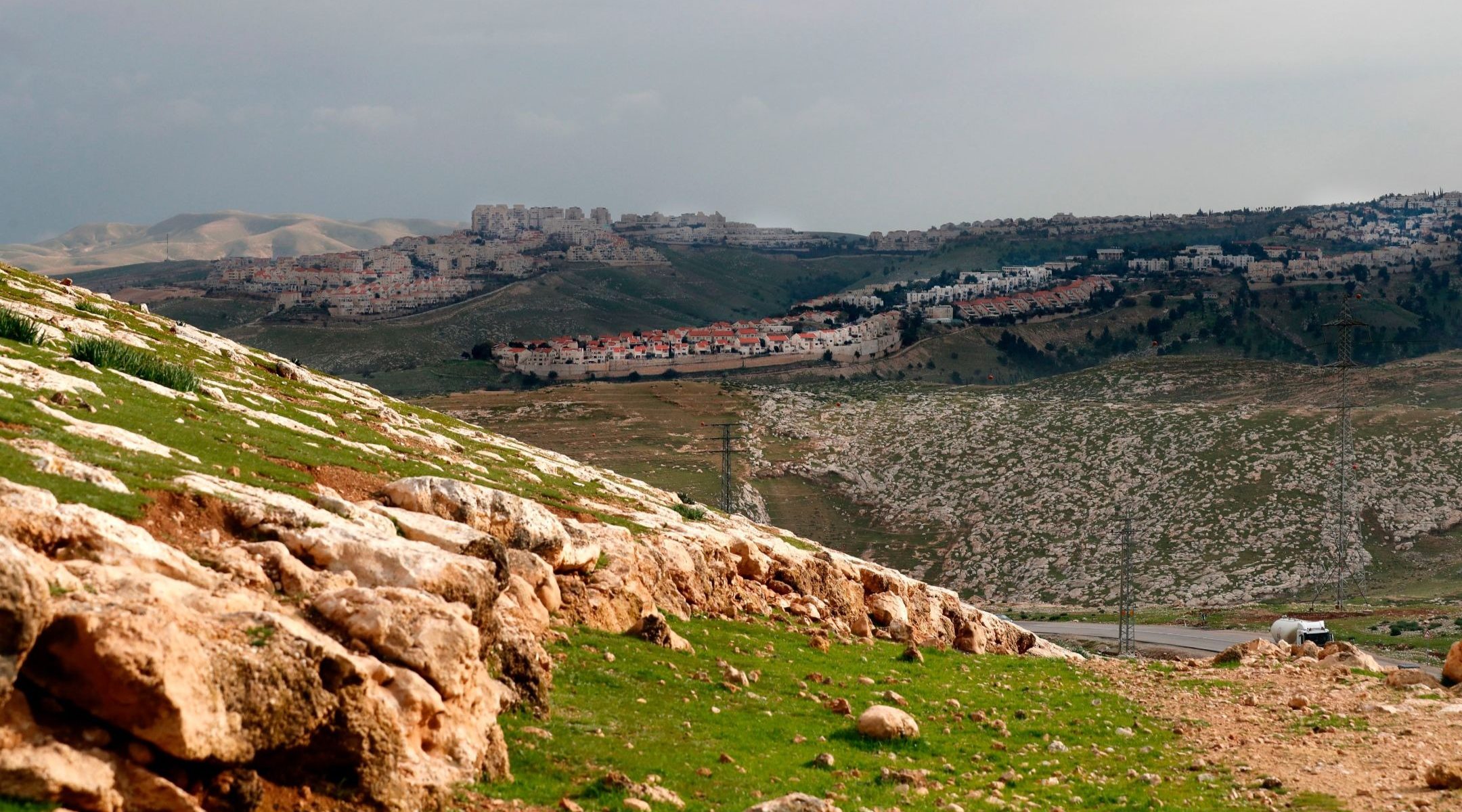 A picture taken from the controversial E1 corridor in the West Bank shows the Israeli settlement of Maale Adumim in the background, Feb. 25, 2020. (Ahamd Gharabli/AFP via Getty Images)
Advertisement

WASHINGTON (JTA) — A pro-Israel group is warning Israeli leaders that reports of planned annexations of parts of the West Bank would cause “long-term damage” to the U.S.-Israel alliance.

“Such a move would make a two-state solution harder — if not impossible to achieve — and would likely have far-reaching negative consequences for the U.S.-Israel alliance,” Mark Mellman and Ann Lewis, the president and the co-chairwoman of the Democratic Majority for Israel, wrote to the three leaders negotiating to form a new government in Israel.

The warning letters, obtained by the Jewish Telegraphic Agency, are notable because the Democratic Majority for Israel has pushed back openly against left-wing Democratic critics of Israel’s occupation of the West Bank. The DMFI has an affiliated political action committee.

The letters were sent to Prime Minister Benjamin Netanyahu and two of his rivals, Benny Gantz and Yair Lapid. Annexation of parts of the West Bank may be on the table as part of a coalition agreement, according to reports, although negotiations have fallen apart.

The new letters come around the same time a similar warning to Gantz and his fellow party leaders from more than 130 American Jews, including a number who have long been involved in the pro-Israel mainstream.

The Democratic Majority for Israel letters specifically raise questions about settlement building between Jerusalem and the Maale Adumim settlement, which the Palestinians say would choke off the possibility of a contiguous Palestinian state. They note that some of Israel’s most reliable defenders in Congress, among them both Democrats and Republicans, have opposed annexation.

“We cannot overstate the long-term damage such a move would have on the U.S.-Israel alliance,” the letters said. “The repercussions would be extremely serious and long-lasting. Most Americans will only support that so long as they believe Israel is committed to pursuing peace.”

President Donald Trump’s peace proposal for Israel and a Palestinian state, released in late January, appears to sanction annexation, although U.S. officials said any moves should wait until after the March election in Israel to determine the country’s leadership.

“While the Trump Administration may well approve of some annexation, we can say for certain that this President will not be running America alone — or indefinitely,” the letters said. “Counting on his support to carry the day suggests a fundamental misreading of American government and politics.”

The letters come the same week that Mellman sent an email to Democratic Majority for Israel PAC supporters claiming partial credit for pushing Bernie Sanders out of the Democratic presidential race, effectively making Joe Biden the Democratic nominee. The former vice president has longstanding ties with the mainstream pro-Israel community.

Sanders had staked out a sharply critical posture toward Netanyahu’s government, calling it racist and saying he would consider leveraging aid to Israel to influence its governments.

“That’s a big victory — one you helped bring about,” Mellman said in the email. “Ads run by DMFI PAC prevented Sanders from winning the Iowa caucuses.” (Sanders essentially tied with another candidate, Pete Buttigieg, for first place in Iowa, but he underperformed compared to what polls were predicting.)

Mellman said the fight to ensure a pro-Israel agenda in the Democratic Party was ongoing because Sanders said in his concession speech that he would remain on the ballot in primary states to accrue delegates and maintain influence on the party platform.

“Extreme groups aligned with Sanders, as well as some of his top surrogates — including Congresswomen Rashida Tlaib and Ilhan Omar — have publicly declared an effort to make the platform anti-Israel,” Mellman said. “If Democrats adopt an anti-Israel platform this year, the vocabulary, views and votes of politicians will shift against us dramatically.”