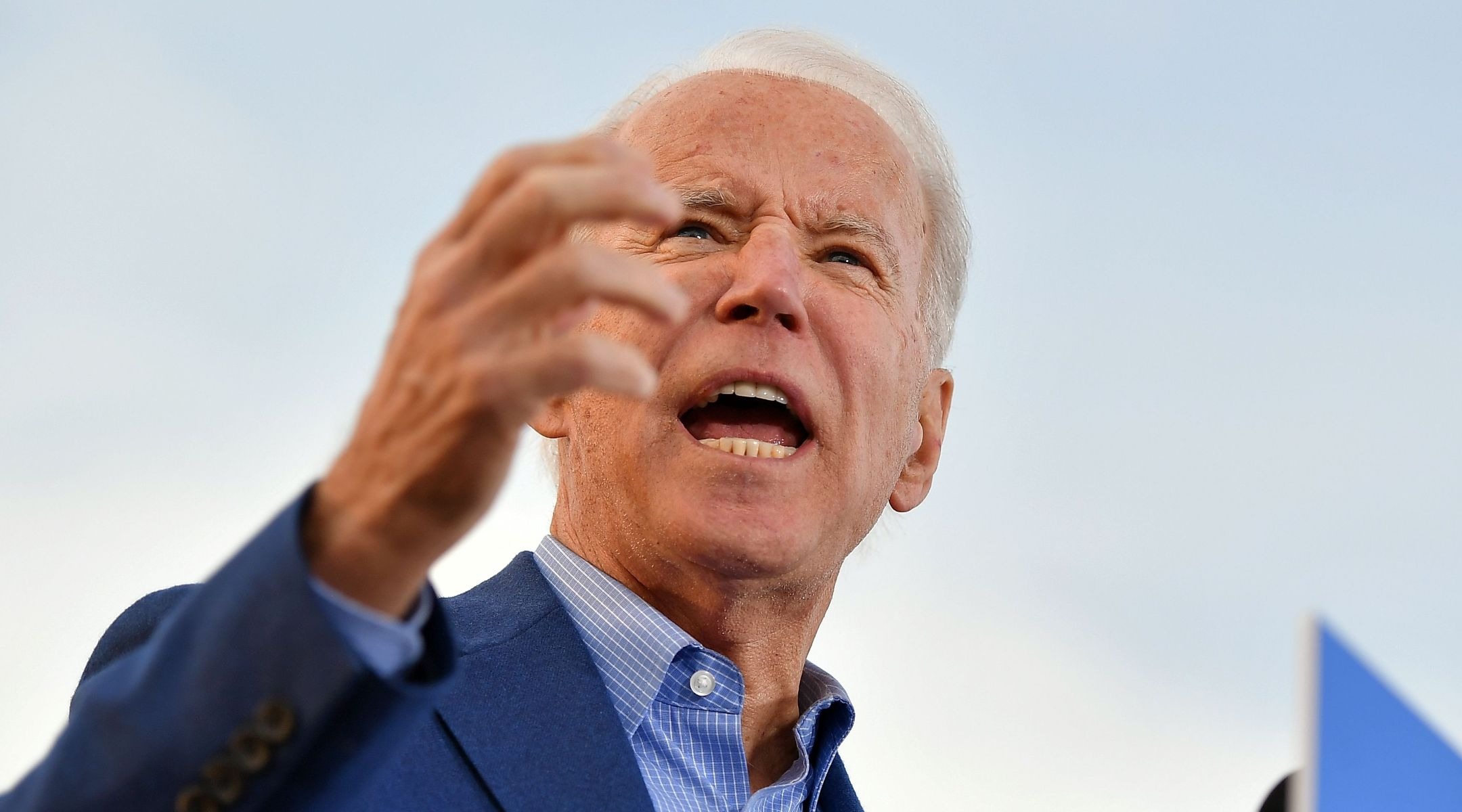 WASHINGTON (JTA) — Joe Biden said the U.S. should press Israel not to take any actions that jeopardize a two-state solution, a reference to reports that Israel may try to annex part of the West Bank.

“A priority now for the cause of Israeli-Palestinian peace should be resuming our dialogue with the Palestinians and pressing Israel not to take actions that make a two-state solution impossible,” Biden said. “I will reopen the U.S. consulate in East Jerusalem, find a way to re-open the PLO’s diplomatic mission in Washington, and resume the decades-long economic and security assistance efforts to the Palestinians that the Trump Administration stopped.”

The new Israeli government is grappling with whether to annex parts of the West Bank, and as Biden has secured the Democratic nomination for the presidency, he has come under pressure from the Democratic Party’s left to speak out against any such move, which would be seen as highly controversial in the international community.

The peace plan unveiled earlier this year by President Donald Trump embraces Israel’s annexation of parts of the West Bank as long as Israel accepts the plan’s predicate that a Palestinian state would emerge in other parts of the territory. Netanyahu has set July 1 as a deadline to come up with an annexation plan.

A letter this week from 30 former top national security officials in Democratic administrations expressed alarm at the prospect of annexation, and urged Biden to include in this year’s Democratic Party opposition to the occupation of the West Bank and to settlement expansion. That would be a notable change — Democratic platforms have until now not criticized the occupation.

“Past party platforms have rightly stated a commitment to Israel’s security and included condemnations of threats and actions against our ally, in addition to embracing a two-state outcome,” said the letter, organized by J Street, the liberal Jewish Middle East policy group. “Those platforms have, however, also been nearly silent on the rights of Palestinians, on Israeli actions that undermine those rights and the prospects for a two-state solution, and on the need for security for both peoples.”

Tensions between those in the party who, like Biden, are close to the mainstream pro-Israel lobby, and those influenced by J Street are likely to continue. The lobby is urging Democratic senators to sign a letter initiated by Sens. Tim Kaine, D-Va., Chris Van Hollen, D-Md., and Chris Murphy, D-Conn., that would warn Israel’s government not to move ahead with annexation. All three are J Street endorses.

Sen. Ben Cardin, D-Md., who is close to the American Israel Public Affairs Committee, this week said in a conference call organized by the Jewish Democratic Council of America that he is disinclined to add his name to the letter.

Biden’s statement was part of a series of replies to JTA on the presidential candidate’s Middle East policy. Biden has said in the past it is also incumbent on the Palestinians to preserve two-state options. A campaign spokesman noted to JTA Biden’s past calls on both sides to refrain from unilateralism.

“Palestinian leaders should end the incitement and glorification of violence, and they must begin to level with their people about the legitimacy and permanence of Israel as a Jewish state in the historic homeland of the Jewish people,” Biden told the Council on Foreign Relations last August. “Israeli leaders should stop the expansion of West Bank settlements and talk of annexation that would make two states impossible to achieve.”

The statement from Tuesday also takes a cudgel to the Trump administration’s peace plan, which sanctions annexation under certain conditions. It is Biden’s most robust criticism of the recent policies of Israeli Prime Minister Benjamin Netanyahu, who campaigned in the most recent elections on a pledge to move toward annexation.

Biden has separately said he would not reverse President Donald Trump’s decision in 2018 to move the U.S. embassy to Jerusalem.

The Palestinians pulled out of the Trump peace process in December 2017, when Trump recognized Jerusalem as Israel’s capital. Trump subsequently cut off virtually all assistance to the Palestinians, closed the PLO office in Washington, and rolled the eastern Jerusalem consulate’s responsibilities into the Israeli embassy, seen as a downgrading of U.S.-Palestinian relations.