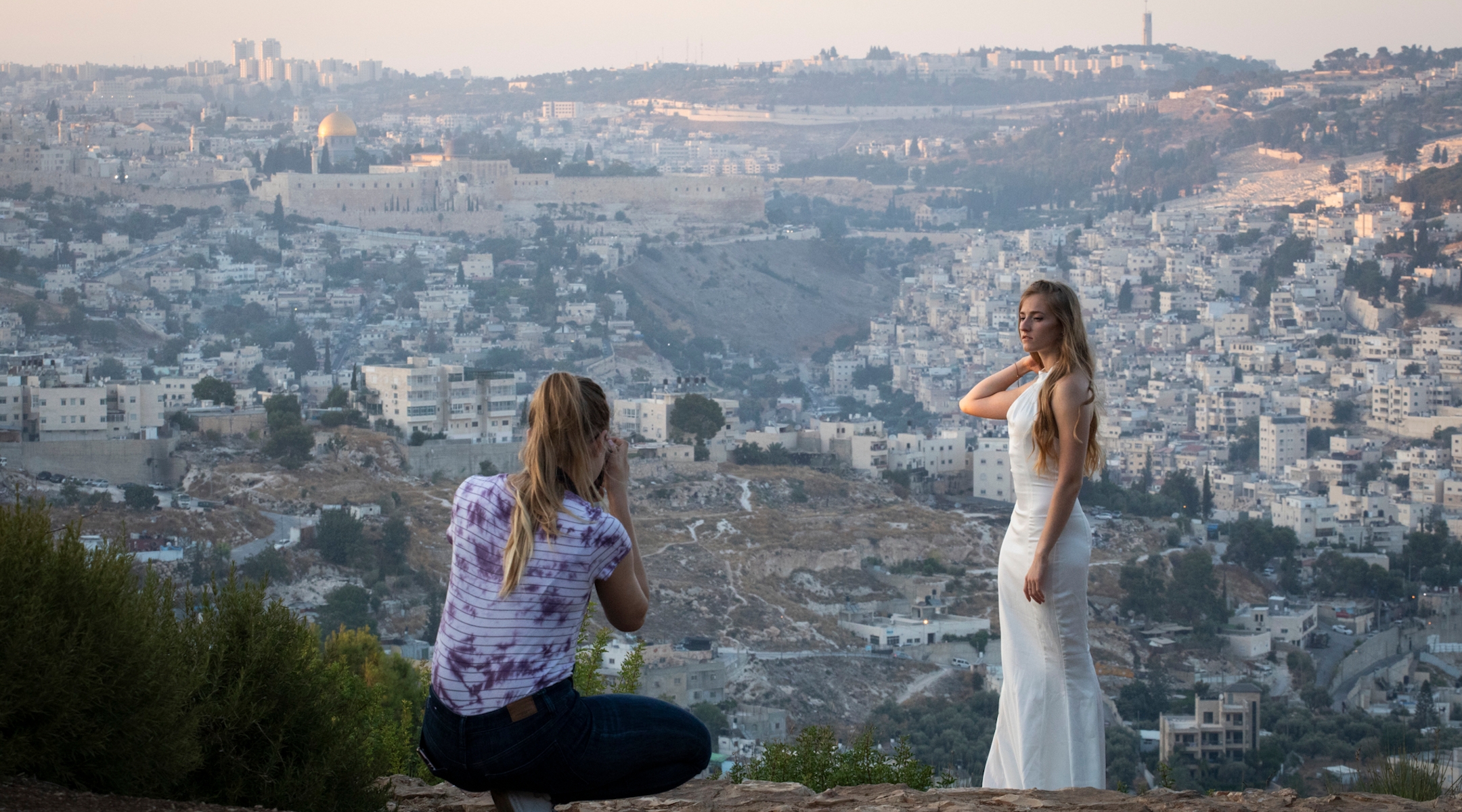 An Israeli woman in a wedding dress is photographed with a view of the Old City of Jerusalem in the background. (Hadas Parush/Flash90)
Advertisement

JERUSALEM (JTA) — Israel’s two biggest cities are helping couples whose weddings have been upended by the coronavirus pandemic get married in style, even as event halls are closed and strict limits on attendance are in place.

Jerusalem and Tel Aviv are making scenic spots available for wedding ceremonies, with financial support for couples that qualify. The cities launched the new programs to coincide with Wednesday’s celebration of Tu B’Av, the Jewish equivalent of Valentine’s Day.

As is often the case Jerusalem, the center of the country’s religious leadership, and the secular metropolis of Tel Aviv are going about things differently.

Earlier this week, Jerusalem began operating a program for couples with at least one person or one set of parents living in the city. The program offers a free venue and basic infrastructure for a 20-person wedding in popular locations there. Among the locations are the Mount Scopus Promenade, the Bloomfield Garden, the Jerusalem Forest and the observation point of the seven arches on the Mount of Olives.

But there appears to be a catch that does not appear on the registration form: Couples must be marrying through the Chief Rabbinate, the country’s religious authority that oversees weddings. The Chief Rabbinate, which is run by Orthodox authorities, does not permit same-sex, secular or interfaith couples to marry — those couples typically wed abroad, then have their marriages recognized by Israel — so many couples are not eligible to participate in the Jerusalem program. (The rules also have contributed to some couples being separated for months because of the country’s travel restrictions.)

According to a report in Haaretz, at least one couple — a same-sex couple who planned to be married by a Reform rabbi — is suing over Jerusalem’s program with the support of groups advocating for pluralism in Israel. The suit asks the court to stop any couple from being married through the program until all couples are allowed.

The Jerusalem municipality told Haaretz that it had not yet received the lawsuit and would respond in court.

When Tel Aviv-Yafo announced its “special wedding package” on Tuesday, in “picturesque” outdoor locations throughout the city, it did not suggest that couples must marry through the Chief Rabbinate. But it did extend special benefits to couples whose weddings would be sanctioned by religious authorities.

“For couples wishing to marry through the Chief Rabbinate, a rabbi and ketubah (Jewish marriage contract) will also be provided cost-free,” the announcement said.

Both programs run through Rosh Hashanah. Neither provides weddings on Shabbat.