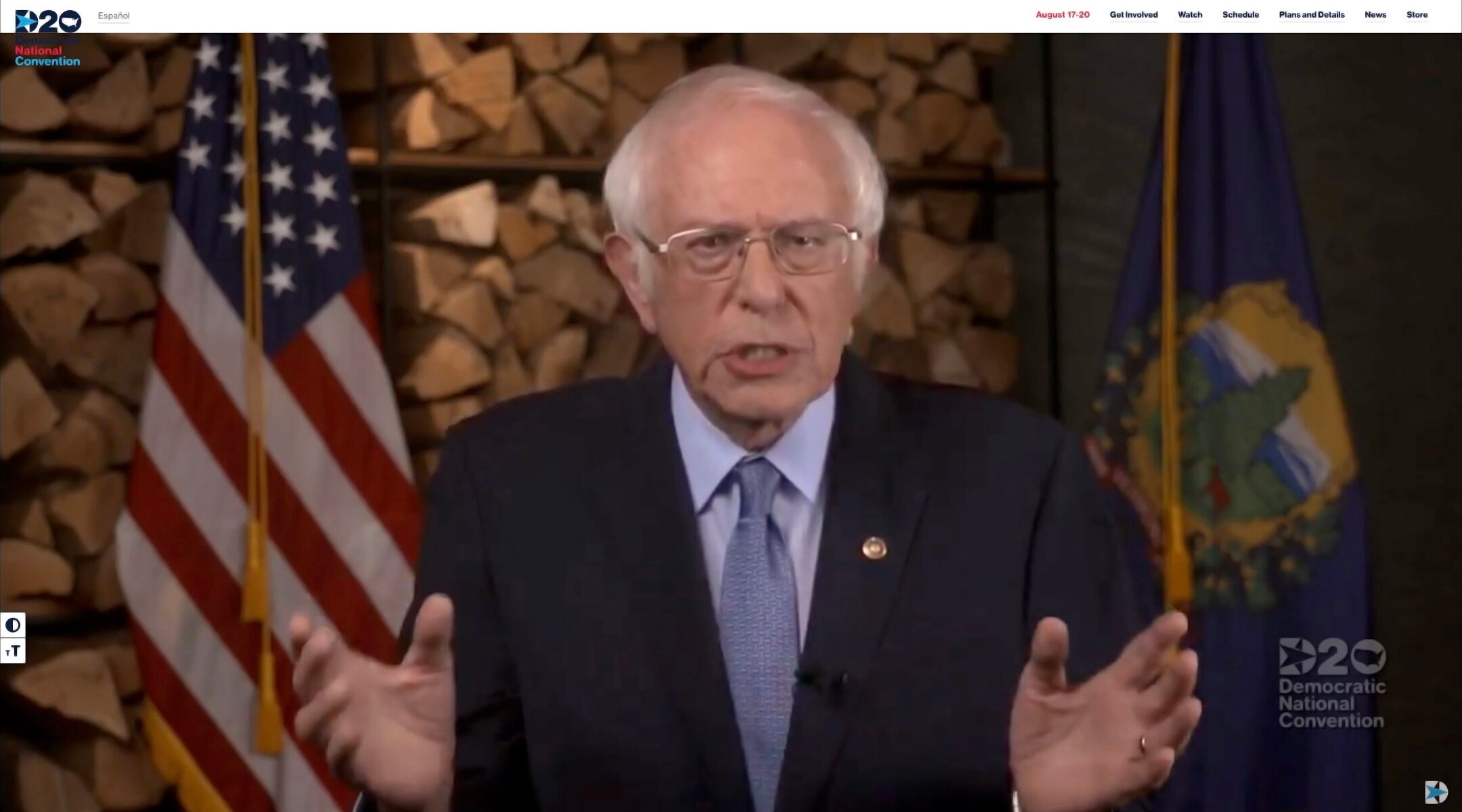 In this screenshot from the DNCC’s livestream of the 2020 Democratic National Convention, Sen. Bernie Sanders (I-VT) addresses the virtual convention on August 17, 2020. (Handout/DNCC via Getty Images)
Advertisement

WASHINGTON (JTA) — Democrats launched their virtual convention with appeals for a once-fractured party to come together and oust Donald Trump from the presidency, making a case that the racial divisions they say Trump stokes are ripping the country apart.

One of the most pointed appeals for unity Monday night came from Bernie Sanders, the Jewish senator from Vermont who was the most serious rival to the eventual nominee, former Vice President Joe Biden.

Sanders, given one of the longest speaking slots, appealed to his progressive followers to embrace Biden, a centrist. Sanders endorsed Biden in March after a divisive primary season, but party leaders fear that the Vermont senator’s followers remain skeptical of Biden.

“Together we must build a nation that is more equitable, more compassionate, and more inclusive,” Sanders said. “I know that Joe Biden will begin that fight on day one.”

He said Biden would advance health care protections, raise the minimum wage and protect infrastructure, and then he pivoted to what was a major theme of the evening, the racial divisions Democrats say Trump has spurred with bigoted policies and statements.

“To heal the soul of our nation, Joe Biden will end the hate and division Trump has created,” Sanders said. “He will stop the demonization of immigrants, the coddling of white nationalists, the racist dog-whistling, the religious bigotry, and the ugly attacks on women.”

The deadly march by neo-Nazis and white supremacists in Charlottesville, Virginia in 2017 took center stage. The convention — all virtual, because of limitations imposed by the coronavirus pandemic — started with a montage of unrest that included both the Charlottesville march and the recent Black Lives Matter protests.

Biden made Charlottesville a central feature of his campaign at its launch in April 2019, saying he decided to run primarily because of Trump’s equivocations on who was responsible for the violence. Last week, he announced his selection of Kamala Harris, a Black woman, as his running mate on the third anniversary of that march.

Andrew Cuomo, the New York governor, likened the social unrest to the pandemic and explicitly cited rising anti-Semitism as one of the problems facing America.

“A virus attacks when the body is weak and when it cannot defend itself,” Cuomo said in his speech. “Over these past few years, America’s body politic has been weakened. The divisions have been growing deeper: the anti-Semitism; the anti-Latino, the anti-immigrant fervor; the racism in Charlottesville, where the KKK didn’t even bother to wear their hoods.”

In another keynote closing the evening, Michelle Obama, the former first lady, also invoked tensions over race. She linked Trump’s isolationism and his rejection of international treaties to what she depicted as his uncaring policies at home. She alluded to Trump’s exit from the Iran nuclear deal negotiated by her husband, President Barack Obama, in 2015.

“Internationally, we’ve turned our back, not just on agreements forged by my husband, but on alliances championed by presidents like Reagan and Eisenhower,” she said. “And here at home, as George Floyd, Breonna Taylor, and a never-ending list of innocent people of color continue to be murdered, stating the simple fact that a Black life matters is still met with derision from the nation’s highest office.”

Taylor and Floyd were killed by police; Taylor in Louisville, Kentucky, in March and Floyd in Minneapolis in May. Their deaths launched massive protests nationwide against police brutality.