Israel, the Trumps and the extremism question: What we’re watching at the RNC 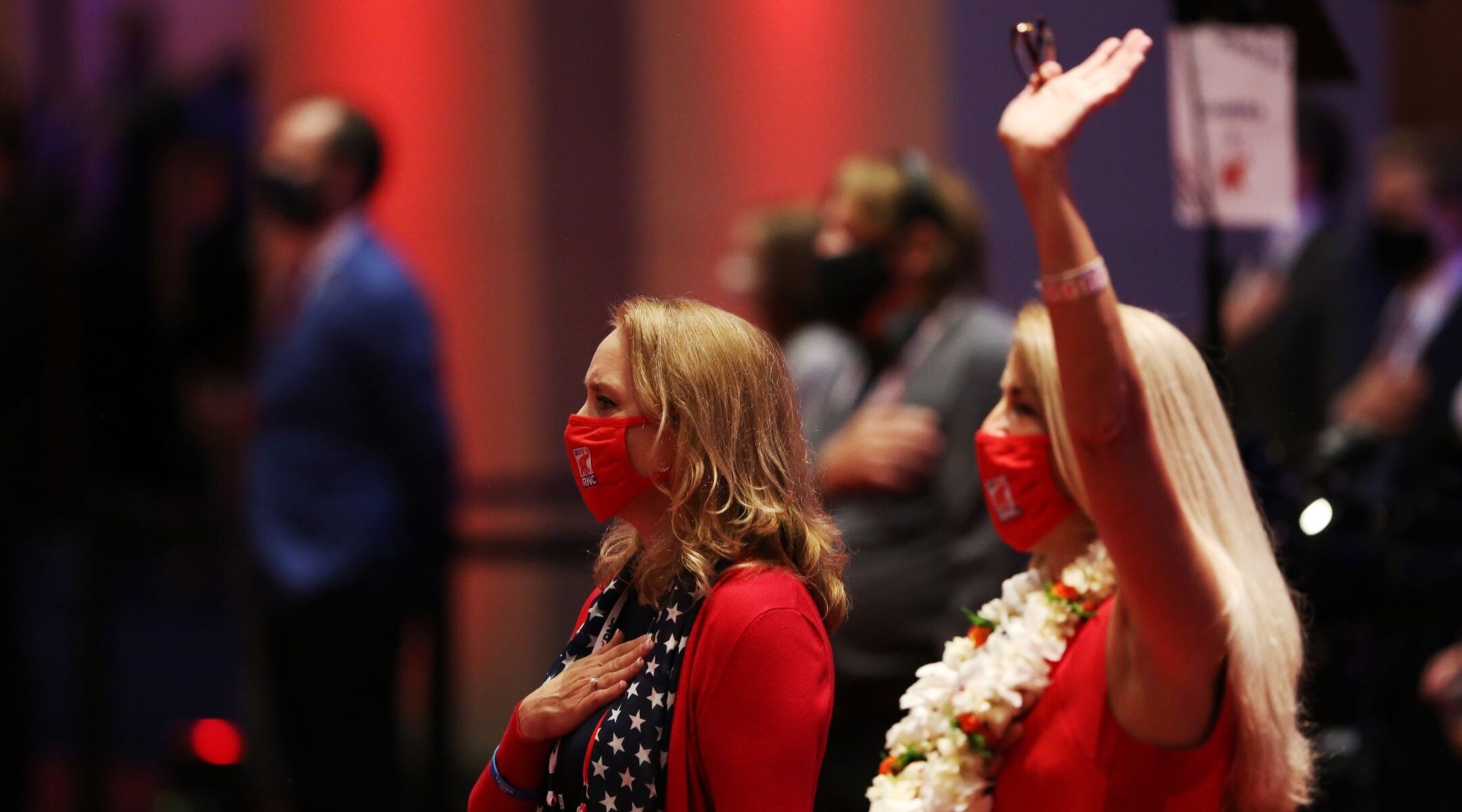 Delegates show their enthusiasm on the first day of the Republican National Convention at the Charlotte Convention Center in North Carolina, Aug. 24, 2020. (Travis Dove-Pool/Getty Images)
Advertisement

WASHINGTON (JTA) — The Republican convention starting this week will have plenty of what appears to be Jewish-specific messaging, but the messaging’s more pertinent target may be evangelical Christians.

President Donald Trump made that clear on Friday in a speech on the eve of the convention to a conservative group.

Speaking to the Council for National Policy, Trump reviewed his radical shifts in Israel policy that included moving the embassy to Jerusalem and quitting the Iran nuclear deal, as well as launching an Israel-United Arab Emirates normalization process.

“I could run in Israel, and I think they set up probably a 98% approval rating in Israel,” he said to applause. “So it’s been — it’s been good. And you know who appreciates it the most are the evangelical Christians. They appreciate it the most.”

Trump still has overwhelming evangelical support, but it has softened lately. He’s seeking to shore it up in an election that could hang on a few votes in middle America. Trump also wants to safeguard Jewish votes, especially in Florida, where both parties believe the race could be close enough to hinge on Jewish voters.

The convention could reveal the degree to which the racist and anti-Semitic theories embraced by some members have spread within the party, and how far party leaders are willing to go to repudiate the extremists. While top party leaders have lately disavowed the QAnon theory that a handful of Republicans have advanced in successful primary campaigns, it remains to be seen whether that translates to an overall tone at the convention, where Trump is set to speak nightly for up to an hour.

Here’s what we’ll be watching as the convention gets underway.

The convention schedule seems geared for many big Israel moments, chief among them Secretary of State Mike Pompeo’s scheduled appearance Tuesday night from Jerusalem, reportedly in a video filmed with the Old City as a backdrop. In itself, Pompeo’s appearance is unusual; until now it has been considered unseemly for the nation’s top diplomat to join a political event. The location of his speech, which comes a day into Pompeo’s five-day Middle East trip, makes it stand out even more.

Israel likely will also feature large on Monday night when Nikki Haley, the former ambassador to the United Nations and an Israel champion, is scheduled to speak, and on Wednesday, when New York Rep. Lee Zeldin, who is Jewish and the GOP’s top pro-Israel spokesman in Congress, is on the schedule.

While Trump has explicitly said that some of his Israel policy shifts were designed to appeal to evangelicals, it’s clear that the party is counting on Israel to appeal to Jewish Republicans, too.

During a pre-convention call with Sen. Ted Cruz of Texas on Sunday night, the director of the Republican Jewish Coalition, Matt Brooks, emphasized that his group plans to “go into the critical battleground states around the country in Florida, Ohio, Pennsylvania, Georgia, Arizona and Michigan to really make sure that in what is going to be a very close election, that the Jewish community shows its support for this president.”

After Brooks asked Cruz what his message was to the Jewish community, Cruz painted a dire picture of an administration that would be worse on Israel than the Obama administration — although Biden, Obama’s vice president, was perhaps the Cabinet official who had the closest ties to Israel and was the most sympathetic to its concerns. Biden, Cruz said, was surrounded by Israel-hostile radicals and could make Vermont Sen. Bernie Sanders secretary of state.

Progressives critical of Israel have registered gains in recent years, and conservatives have decried the selection of Karine Jean-Pierre — earlier this year she urged Democratic candidates to boycott the AIPAC conference — as a senior campaign adviser. But Biden has shown no signs of backpedaling from his decades-long commitment to strong U.S. support for Israel.

Biden, in securing the endorsement of Sanders, his closest rival in the primaries, agreed to concessions in a number of areas, but none of them had to do with foreign policy, and the party’s platform did not yield to progressives who sought more criticism of Israel. Sanders, moreover, has prioritized domestic issues and has not shown any interest in joining his Cabinet (nor has he been mentioned as a likely contender for secretary of state).

The convention also will add an important new answer to an ongoing question about whether the Republican Party is a welcoming home for far-right activists and candidates who embrace racist rhetoric and conspiracy theories, or whether they are merely tolerated as part of a broader conservative coalition.

Last week’s Democratic convention, including Biden’s speech accepting the presidential nomination, focused heavily on the 2017 neo-Nazi march on Charlottesville, Virginia, and Trump’s response, which included saying that there were “very fine people on both sides,” to make the case that Trump’s leadership has fueled bigotry and racism in America.

Cruz’s comments at the Republican Jewish Coalition event Sunday suggest a possible playbook for downplaying that criticism. After Brooks asked Cruz to dismantle the claim that Trump equivocated after Charlottesville, Cruz noted that Trump also said he condemned neo-Nazis and white supremacists. Cruz also tried to flip the violence equation, conflating Democrats with violent activists who have joined otherwise peaceful anti-police brutality protests across the country.

But whether the convention speakers, including Trump, stick to an even-keeled message even as a number of mainstage speakers have come to be identified with the extreme right is a major question. Among the featured speakers are Madison Cawthorn, who had posted on social media photos of his tour of Adolf Hitler’s vacation retreat, and Burgess Owens, a Utahan who is among a handful of Republican nominees who have associations with the conspiracist cult QAnon. Congressional Republicans, including House Minority Leader Kevin McCarthy, have tried to distance themselves from QAnon, but Trump has said he welcomes support from its aficionados.

Another question is whether the convention will feature language that Democrats and watchdogs such as the Anti-Defamation League have warned reflects anti-Semitic dog whistles. That includes attacks on George Soros, the Jewish billionaire donor to liberal causes and politicians who has been attacked by convention speakers including McCarthy and former New York Mayor Rudy Giuliani.

Last year, McCarthy claimed that Soros and other Jewish billionaires were trying to “buy” the election (but later deleted his tweet). Giuliani, now Trump’s personal lawyer, said recently that Soros, a Holocaust survivor, has a “sick background.”

Since last year, the ADL and others have called out multiple Republicans for using language and imagery rooted in anti-Semitic stereotypes — such as Missouri Sen. Josh Hawley, who decried “cosmopolitan elites,” and Georgia Sen. David Perdue, who ran an ad against his Jewish opponent Jon Ossoff in which Ossoff’s nose was artificially elongated. The Trump campaign was criticized as well for using an image in an ad that the ADL said closely resembled a Nazi symbol.

Another potential flashpoint is a convention resolution, first reported by The Associated Press, that would refute “the legitimacy of the Southern Poverty Law Center to identify hate groups.” The resolution instead would accuse the group, which is allied with a number of Jewish civil rights groups including the ADL, of “putting conservative groups or voices at risk of attack.”

One of the many departures from convention norms this year is that Trump plans to speak at length every night. Traditionally, the nominees appear briefly the first three nights and reserve their longform speech for the final night.

It’s a sign of the degree to which Trump has reshaped the party. The conservative Fox News Channel featured a segment last week on what it described as the convention’s 12 key speakers; six were Trumps, including his Jewish daughter, Ivanka. (Notably absent is his son-in-law, Jared Kushner, the de facto chief of staff who handles multiple portfolios, including Middle East peace.)

In an unprecedented move, the party resolved not to adopt a policy platform, substituting instead a statement declaring that it “enthusiastically supports President Trump.”

Will that pay off? The Biden campaign on Monday released the names of 27 former GOP lawmakers, including Arizona Sen. Jeff Flake, who are endorsing Biden, in addition to the three former presidential candidates who endorsed him last week.

Cruz, who has had a contentious relationship with Trump and was not invited to speak, suggested that focusing too much on Trump could be a problem. Trump’s policies are popular, he told the RJC meeting; Trump is not.

Democrats “want this election to be a referendum on Donald Trump. They want it to be a personality test,” Cruz said. “Do you like him personally? Do you like his tweets? And the Democrats believe if that’s the deciding issue as a personality referendum, they think they win that. I don’t know if they do or not.”