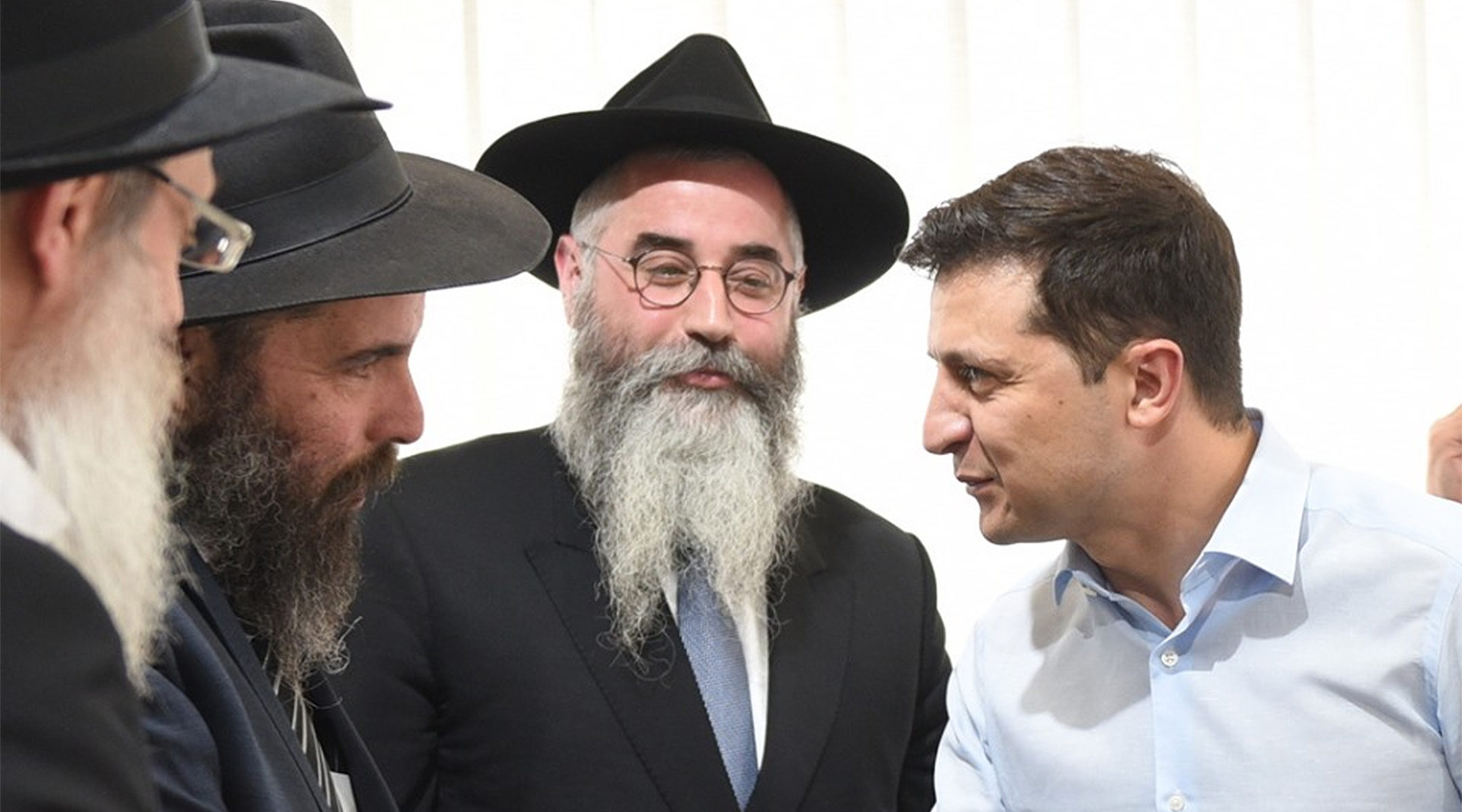 Ukrainian President Vlodymyr Zelensky, right, meets with rabbis in Kyiv, May 6, 2019. (Courtesy of the Jewish Community of Kharkov)
Advertisement

(JTA) — If you’re looking for a good investment, you should put your money on Ukraine – especially if you’re Jewish.

That’s the message from the office of the country’s Jewish president, Vlodymyr Zelensky, about a new campaign that aims to attract new investments to help grow Ukraine’s stunted economy.

The first video of the campaign, featuring Zelensky speaking in English with a heavy Ukrainian accent, does not mentions Jews. The one-minute film focuses on Ukraine’s touristic potential and 5% tax on information technology industries.

But Zelensky is hoping that Jews especially will answer the call in light of the country’s historical significance for Jews, a spokesperson from Zelensky’s office told the Jewish Telegraphic Agency.

“The president find it particularly important to attract Jewish investors from across the world in light of the historic ties between the Jewish people and Ukraine, which has remained relevant also today with hundreds of thousands of Jewish tourists visiting Ukraine each year,” the spokesperson said. The spokesperson did not wish to be named, citing presidential protocol.

In the video Zelensky, a gravel-voiced comedian and television star who won a landslide victory last year, describes his country as a “frontier, where new things are happening.”

He also says that “Ukraine now is something we can do and benefit together.” Hurry up, he tells viewers, “Europe’s biggest country is the next big thing.”

Zelensky is certainly right about Ukraine’s size – its land area is more than four times larger than the state of New York – and perhaps its potential. Hugues Mingarelli, the EU ambassador to Ukraine, told Business Planet last year that “Ukraine has huge potential for investors because this country has an exceptionally skilled labor force.”

But its economy and society are struggling with a Soviet legacy complicated by an ethnic and language divide between native speakers of Ukrainian and Russian, where Jews and other minorities often serve as scapegoats. It has an unresolved territorial dispute with Russia, which is stoking separatism in the east and a raging inflation that means the hryvnia has lost 66% percent of its worth against the dollar over the past five years.

The coronavirus crisis, which paralyzed world economies, is not helping: Ukraine’s economy is projected to shrink by 6% this year.

Zelensky enjoys relatively high popularity — he has a 38% approval rating, which is lower than the 47% from May but still good in Ukrainian terms. He speaks openly about his Jewish origins, though he does not practice the faith and his wife and children are not Jewish.

To many, the fact that he could win an election while openly identifying as a Jew is a powerful sign that Ukraine has moved beyond the violence that characterized much of the shared history that Zelensky’s spokesperson referenced.

For centuries, Jews have been oppressed and murdered there, including by successive generations of leaders who are celebrated in Ukraine today as patriots.

Understandably, Zelensky explores none of these issues in the promotional video, in which he says “Ukraine is dream: peaceful and open.”