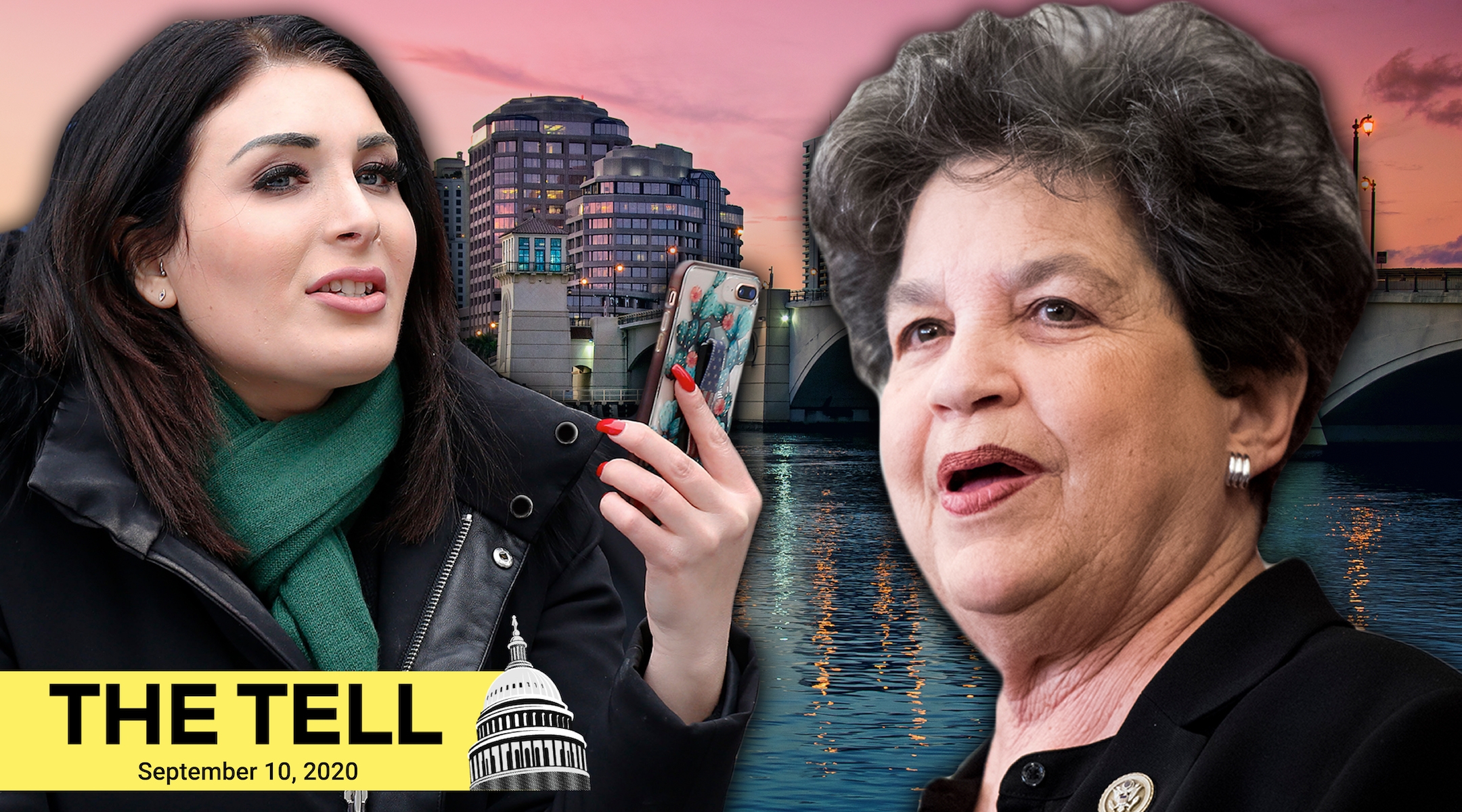 WASHINGTON (JTA) — Just two years ago, right-wing provocateur Laura Loomer was making headlines for being banned from social media and rideshare services for her anti-Muslim and anti-migrant rhetoric.

Now Loomer, who is Jewish, is facing off against Lois Frankel, the Jewish incumbent in Florida’s 21st District, which includes Palm Beach and not so incidentally President Donald Trump’s Mar-a-Lago estate. Trump has endorsed Loomer and his campaign is helping her out.

I wrote about the race and spoke to Frankel, who can barely say Loomer’s name aloud — she is not happy about facing someone associated with the far right.

“That’s the issue with her, with her rhetoric, and her extremism, her bigotry, her linkage with Trump, she uses it to raise money,” the eight-year congresswoman said.

Loomer, for her part, made no bones to me that this is a very Jewish fight.

“We’re putting the Jews on trial here in District 21,” she said. “They have a choice between a Republican Jew who is going to advocate for their survival in their best interests, or they can stand with self-hating Jew Lois Frankel, who is doing the bidding for the jihadists in the Democrat Party who are just literally walking Jews to the gas chamber.”

Rep. Eliot Engel, the New York Democrat who chaired the House Foreign Affairs Committee, lost his primary to progressive Jamaal Bowman, but unusually for an outgoing congressman he’s going down swinging: Engel has launched contempt proceedings against Secretary of State Mike Pompeo for not complying with subpoenas related to alleged wrongdoing connected to the firing of the agency’s inspector general.

Engel’s high profile notwithstanding, the scramble to replace him on the committee in the next Congress is fully underway. The Democratic Majority for Israel, a pro-Israel advocacy group, is seeking to interview the three declared candidates: Brad Sherman of California, Joaquin Castro of Texas and Gregory Meeks of New York.

Sherman was the first to agree to a grilling this week. He is perhaps one of the closest Democrats to the mainstream pro-Israel community represented by the Democratic Majority for Israel, which is why many were surprised last month when the candidates all said they opposed Israel spending U.S. aid money on West Bank annexation. Sherman explained to the group that he meant Israel was not in any case able to spend defense assistance on annexation.

Sherman also took shots at his rivals, noting that each had boycotted Israeli Prime Minister Benjamin Netanyahu’s 2015 speech to Congress when he slammed President Obama’s Iran policies, and each had voted against condemning the U.N. Security Council Resolution denouncing Israel’s settlement policies that Obama had allowed through in the last weeks of his administration. Sherman attended the Netanyahu speech and voted to condemn the Security Council.

Intriguingly, though, Sherman hinted that should he be defeated, the Democratic Majority for Israel should back one of the other two candidates. He said Meeks and Castro were of the moderate stripe, not leftists of the type that the group’s affiliated political action committee has opposed in primaries.

“My job is to convince you not that I’m an acceptable person to serve as chair, but rather that I am so much better than my opponents, that the most important thing your organization could do is to work to make me chair of the Foreign Affairs Committee,” he told the group, adding later about the others, “I want to point out if they were being challenged by Justice Democrats in their own district I’d be rooting for them.”

QME yet to be QED

Despite the recent normalization deal, Israel opposes the sale of F-35 stealth jets to the United Arab Emirates. Jared Kushner, the senior White House adviser who brokered the deal, defended the possible sale, but he seemed hesitant to say outright that Israel’s qualitative military edge, or QME, would be preserved in such a sale.

“We’re going to, obviously, work with the QME. And we’ll do what we can do to make sure that we accommodate that circumstance,” Kusher, Trump’s son-in-law, said Wednesday.

Democrats already are seizing on the issue. Rep. Debbie Wasserman Schultz of Florida, a key swing state with a substantial Jewish vote, railed against the proposed sale in an op-ed, and Rep. Brad Schneider, D-Ill., led 10 Democrats in writing to Trump on Thursday, saying they would take steps to scuttle any such sale. Along with Wasserman Schultz and Schneider, other   Jewish Democrats who signed are Elaine Luria of Virginia, Josh Gottheimer of New Jersey, Max Rose of New York and Dean Phillips of Minnesota.

Sore at Soros? Read this

My colleague Ben Sales breaks down the Jews who attack George Soros, despite the anti-Semitic baggage that goes along with that. He also adds a Soros explainer.

Among other comments, Kushner made an eyebrow-raising statement according to Bob Woodward in his new book, The New York Times reported Wednesday. After calling advisers who had left the White House “overconfident idiots,” Kushner told Trump, “This is really when you’ll appreciate having the neurotic Jews around.”

Neo-Nazis and white supremacists encircle counterprotesters at the base of a statue of Thomas Jefferson after marching through the University of Virginia campus with torches in Charlottesville, Va., Aug. 11, 2017 (Shay Horse/NurPhoto via Getty Images)

Homeland Security staffer-turned-whistleblower Brian Murphy rocked Washington this week by saying he was pressured by higher-ups to downplay intelligence on Russian extremists and domestic far-right terrorists. Murphy’s superiors, he alleges, were trying to hew to Trump’s preferred narratives, including that leftists posed a more grievous threat. There’s been a lot of reporting this week on the Russia component. The Daily Beast’s Kelly Weill delves into the downplaying of the white supremacist threat. Haaretz’s Noa Landau picks out the superlatives used by the Mossad in a recruitment tweet for Israel’s intelligence agency.