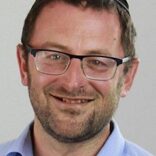 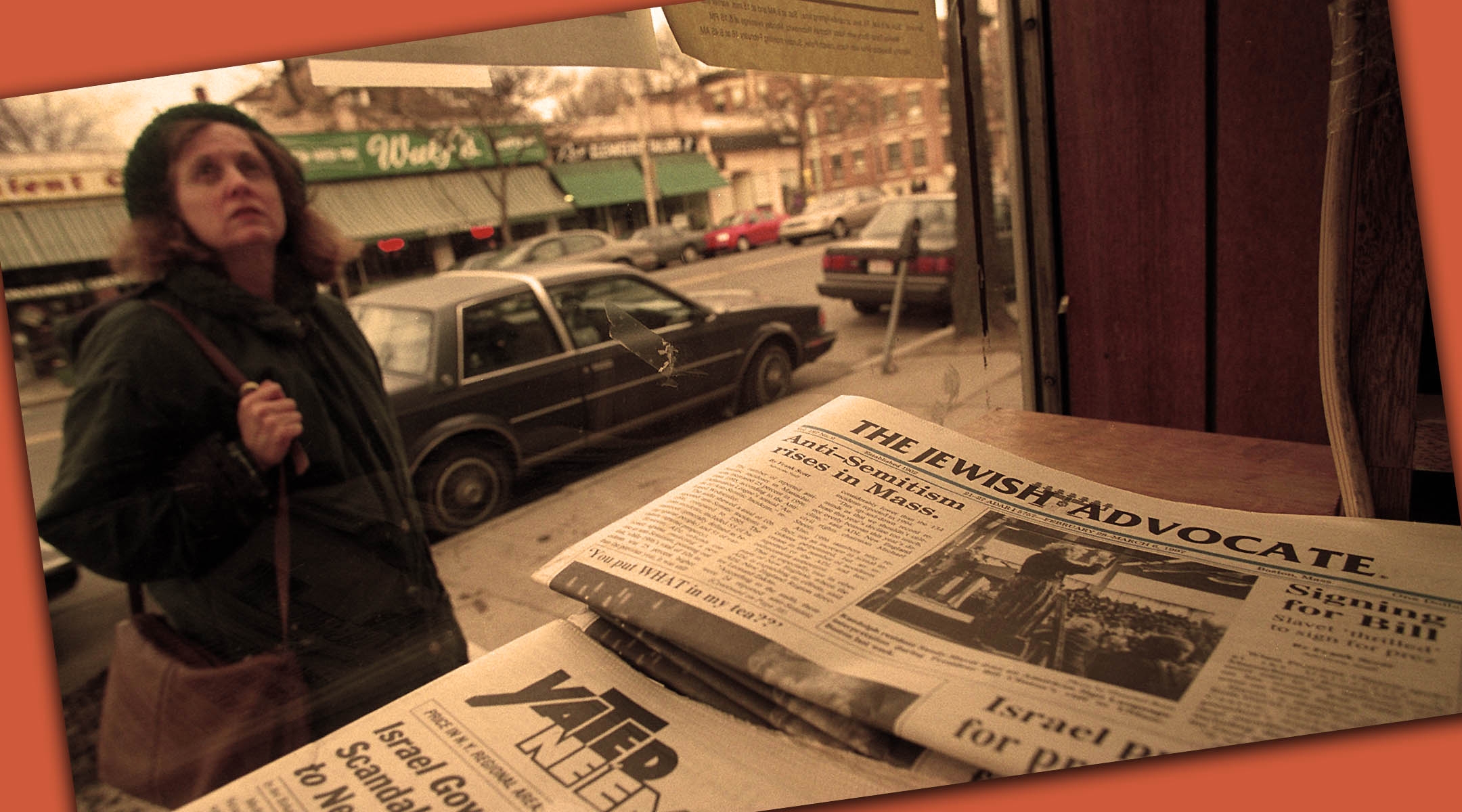 The Jewish Advocate sits on a shelf in the window of Israel Book Shop, Inc. on Harvard Avenue in Brookline, MA on March 2, 1997. (Pat Greenhouse/The Boston Globe via Getty Images)
Advertisement

(JTA) — The Baltimore Jewish Times newsroom was always quietest on Wednesdays. Given the unyielding Tuesday editorial deadlines, Wednesday was the best day to get out of the office to meet people, follow a hunch or find inspiration.

If Ira Rifkin, one of the senior editors, saw me in the newsroom on a Wednesday, he’d gruffly remind me, “The stories are out there.” I was new and getting a feel for the JT’s weekly rhythm, but I learned to get “out there,” and not just on Wednesdays.

Out there was in the Baltimore Jewish community.

The stories are still out there. They take place in the schools we send our children to, the synagogues where we gather, the businesses we frequent, the neighborhoods we live in and — nowadays especially — our hospitals and nursing homes. Jewish media chronicles our community’s life and times.

During my time at the JT in the 1990s, the “stories out there” were wide-ranging: the synagogues relocating to the northwest suburbs; a bailout for a financially troubled day school; the Baltimore Orioles’ Domincan-born starting pitcher with unlikely Jewish ancestry.

Foreign stories had local angles, too, like a Jewish social worker who spent six months working with traumatized children in a Croatian refugee camp or travel agents discussing what the just signed Israeli-Jordanian peace accords would mean for business.

Jewish media forces us to reflect on what kind of community we want to be, as well as acknowledge where we actually are. Edgier stories addressing issues like financial misconduct, Jewish clergy who officiated interfaith weddings, or sexual abuse touched a nerve because we know these people.

Now the coronavirus crisis is posing an existential question for Jewish papers. In the past month, Boston’s Jewish Advocate ceased publishing, while in more promising news, the struggling Detroit Jewish News became a nonprofit newspaper.

Earlier this year, the Canadian Jewish News and the New Jersey Jewish News ceased operations, while Britain’s venerable Jewish Chronicle and Jewish News avoided liquidation thanks to a last-minute rescue by a consortium of U.K. Jews. And the New York Jewish Week, whose community is too big to let it fail — so I thought — suspended its print edition.

There are still many Jewish news organizations telling important stories. But they are less and less often serving local audiences.

The common denominator behind this troubling trend? Quickly vanishing advertising revenues. Many businesses are closed and events have been cancelled — what’s to advertise?

While challenges with advertising supported journalism predate the pandemic, the coronavirus crisis is dramatically accelerating the need for Jewish publishers to make very painful decisions.

This isn’t only “bad news for the Jews.” All small publications, from local outlets to ethnic press to alternative weeklies, are struggling. I worry that the closure of papers will increase the spread of “news black holes,” places where local journalism is either too weak to serve its role as a watchdog or altogether nonexistent.

Do local Jewish papers as we know them have a future? Could our Jewish communities become news black holes, too?

Jewish papers are more than just a place for politicians to tout their Jewish credentials and endorsements and place advertisements wishing constituents a happy holiday.

They’re a means for public officials to reach out and help communities navigate stormy weather — whether we’re talking about the savings and loan crisis of the 1980s, the housing bubble of the 1990s, or today’s plague and racial unrest — and a place for those leaders to be held accountable. They’re the outgrowth of the kinds of conversations my JT colleagues would have had “out there” on those Wednesday afternoons.

Messages stressing the importance of staying home, keeping social distance and wearing masks need to be reinforced by Jewish media because it is poised to reach Jews where we are and in our vernacular.

Moreover, the pandemic has raised uniquely Jewish issues, such as how to comfort mourners when shiva visits are out of the question, what Jewish tradition has to say about the raft of ethical questions that doctors, patients and families face, and the wisdom of keeping various holiday customs this time of the year. We don’t expect mainstream news to address any of that. That’s the niche we need Jewish media to fill.

Which brings me to the Jewish Chronicle’s relentless coverage of British Labour party anti-Semitism. It happened because sources developed relationships with the reporters and trusted the paper. The JC understood the story in ways the mainstream British press could not have.

Fleet Street’s premature eulogies for the JC described its Labour scoops as heavy lifting, which is certainly true. But Jewish journalists would see this kind of reporting as a call of duty for their community. That’s the purpose of journalism.

Publishers are still trying to figure out a new economic model for sustainable local journalism. The nonprofit model may be the best hope, but there’s no certainty. Regional reporting “hubs” promoted by a number of cost-cutting corporate publishers will not meet Jewish needs on the local level.

Regardless of how the corona crisis plays out, the stories of local Jewish communities will continue to be “out there.”

Who will tell those stories?

Pesach Benson
is a Baltimore native living in Jerusalem, a former deputy managing editor of HonestReporting.com and was a reporter for the Baltimore Jewish Times.
The views and opinions expressed in this article are those of the author and do not necessarily reflect the views of JTA or its parent company, 70 Faces Media.