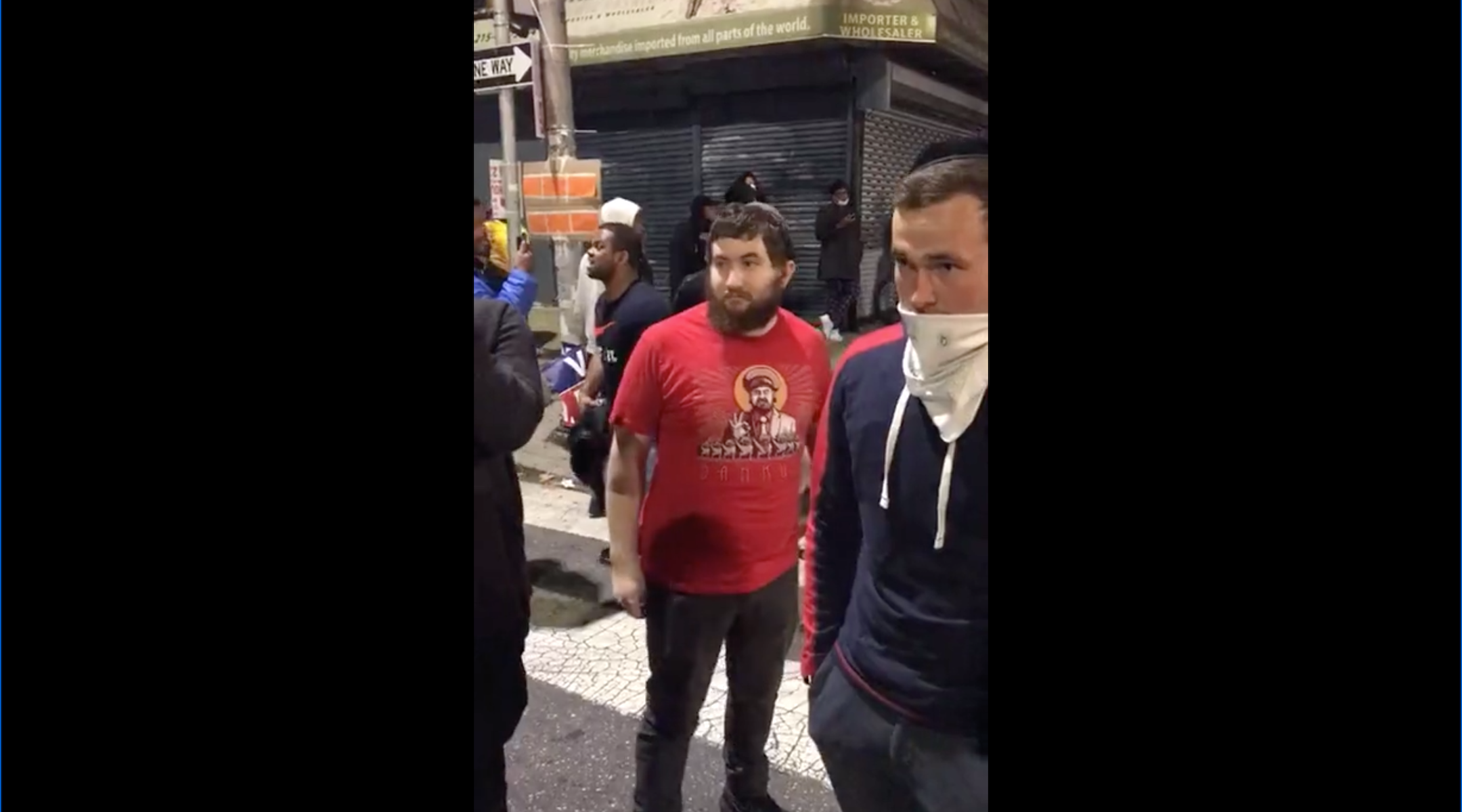 A screen shot from a video of an incident in Philadelphia in which visibly Jewish men at a Black Lives Matter protest were shoved and told to leave, Oct. 27, 2020. (Screen shot from Instagram)
Advertisement

(JTA) — An episode in which three visibly Jewish men were harassed with slurs during the aftermath of a racial justice protest in Philadelphia this week was instigated by an adherent of a fringe extremist movement connected to an anti-Semitic shooting last year.

The incident, which was captured in a video circulated widely on social media, happened late Tuesday night, after demonstrations erupted across the city protesting the killing one day earlier by police of Walter Wallace, an African American man.

“Amalek, Amalek, what are y’all doing down here?” a man off camera says, referencing a biblical tribe traditionally seen as the eternal enemy of the Jews. “Y’all know that we’re the real Jews, right?”

A handful of people then advance on the three Jews, urging them to leave. At one point, someone pushes one of the three Jews, who later moves behind a line of police officers. One man appears to try to shield the Jews from the man holding the camera, who later calls the Jews “synagogue of Satan.”

That term is used by extremist sectors of the Black Hebrew Israelite movement (which is different from Jews of color) and offered one clue about what had taken place. But the video left some questions unanswered: What happened before it began? Who was doing the shouting? Was one of the Jews wearing a t-shirt with a white power symbol?

Interviews with two of the Jewish men and a longer video of the same incident provided answers. They paint a picture of an unprovoked verbal assault on a group of people who said they were there out of curiosity.

At least one of the Jewish men has shared content from far-right activists and returned home believing, as he had previously, that the Black Lives Matter movement is anti-Semitic — even though the verbal abuse he received reflected the rhetoric of a separate movement.

Parts of the Black Hebrew Israelites constitute a fringe group that operates independently of racial justice activists, and long predates and is unconnected to Black Lives Matter. The extremist segments of the movement see Jews as impostors and believe themselves to be the true representatives of Judaism, making anti-Jewish rhetoric a regular part of their activity.

That movement, according to Brian Levin, a professor who studies hate crimes, also has a tendency to “kind of glom onto any kind of event or controversy,” and frequently aims to instigate conflict. The shooters in the attack on a Jersey City kosher supermarket last year were also Black Hebrew Israelites.

“Around election times and particularly when there are conspiracy theories and discussions of elites, the first stop is always the Jews,” said Levin, director of the Center for the Study of Hate and Extremism at California State University, San Bernardino. “But the Black Hebrew Israelites are anti-Semitic no matter where you run into them.”

For the Jewish men in the videos, two of whom were wearing yarmulkes, the encounter came as they stood at an intersection in West Philadelphia when they were approached, unprompted, by a man yelling the anti-Semitic slurs. The man had previously been taunting a row of police standing with shields at the intersection.

In another video shot that night at the same intersection, a voice can be heard saying, “Get your Jewish ass on.”

The Philadelphia Police Department told the Jewish Telegraphic Agency it has no further information on the incident.

The man who appears to have shot the extended video and uploaded it to Instagram has the handle @hoi_philly. HOI, or the House of Israel, is a subgroup of Black Hebrew Israelites that also took part in a widely publicized altercation at the March for Life in 2019.

While extremist Black Hebrew Israelite activity hasn’t changed recently, it now exists in the context of a rising tide of polarization and extremism nationally surrounding Election Day. But the group’s extremist activists do not fit neatly onto the country’s polarized political divide, and are not progressive. Some members are known to shout misogynistic, homophobic and anti-Semitic epithets on the street.

“In such a fraught environment, extremists of all kinds are starting to take to the streets,” said Heidi Beirich, co-founder of the Global Project Against Hate and Extremism. “We’ve already been in a period of heightened street activity. We’re also going to see more street activity in the days to come and this is emblematic of the things that are happening.”

Two of the Jewish men in the video spoke with JTA, though both asked that their names not be printed and denied knowing each other before meeting that night, shortly before the video was taken. One of the Jews, a student at a yeshiva in New Jersey, said he and a friend had come to Philadelphia to visit acquaintances and later came to the protest to see firsthand what they had seen in the news and pay tribute to Wallace’s life.

“We went down there to pay our respects and assess the situation,” he said. When people began saying anti-Semitic things to him, he said, “We didn’t think that it would escalate. We were nodding in approval and listening and understanding their hurt. There was a life lost. I didn’t read too much into the details.”

Another Jewish man in the video has publicly criticized the Black Lives Matter movement and came to the protest wearing a shirt bearing the OK hand gesture, which in the shirt’s context is a white supremacist symbol, in addition to dogs seemingly making Nazi salutes. (The shirt was created by a far-right activist who first gained notoriety after he was prosecuted for teaching his girlfriend’s dog to make a Nazi salute.)

The Jewish man’s recent Twitter feed is a stream of almost exclusively pro-Trump and anti-left-wing posts, including retweets of a few people associated with the far right. He has written and retweeted tweets that call the Black Lives Matter movement a terrorist organization as well as anti-Semitic. After first telling the Jewish Telegraphic Agency that he had come to the protests just to observe, he later acknowledged that he had prior opinions about it and wanted to see if he would experience anti-Semitism.

“I did have a preconceived opinion,” he said. “I came there because I wanted to get my own first person perspective and see, what’s this all about? Are they actually going to say anti-Semitic things to me? It’s hard to believe until it actually happens to you. I didn’t think they were actually going to and I was shocked out of my mind when they did.”

He said that police officers also shoved him as he was leaving the protest.

That man’s takeaway from the incident is what Graie Hagans, a Jew of color who lives in West Philadelphia and has participated in this week’s racial justice protests, said he was concerned about this week. Hagans says he is “deeply heartbroken” because of Wallace’s death and police abuse he’s seen, and he is concerned that the video will reinforce the mistaken idea, among some Jews, that crowds of Black people are inherently dangerous.

“It’s what gets reaffirmed for us as Jewish people when the story and the setup continue to be the danger posed by gathered Black folks,” said Hagans, the vision praxis director for Bend The Arc, a progressive Jewish organization. “Me and three other Black folks gathered has a very different story and feel to it than four white folks gathered.”

The entire incident comes against a context in which a vocal minority of American Jews are deeply skeptical of or opposed to Black Lives Matter, accusing it of anti-Semitism. They have pointed to instances where synagogues were vandalized amid protests and to anti-Israel rhetoric from parts of the movement’s loose network.

But the majority of the Jewish community does not appear to share those feelings. Hundreds of synagogues and Jewish organizations have pledged their support for the Black Lives Matter movement, and Jewish leaders have taken part in the racial justice protests that swept the country earlier this year, including this week in Philadelphia.

Earlier Tuesday night, a group of rabbis joined an interfaith clergy contingent in Philadelphia’s racial justice protests. Rabbi Annie Lewis, co-president of the Board of Rabbis of Philadelphia, said the alliance between Jewish and African-American clergy in the city is more representative of the Jewish role in the protests than an anti-Semitic act by a member of a fringe group.

“Everywhere in the world, there’s anti-Semitism and racism, but the stories that need to be told in Philadelphia are of Black clergy working in partnership with white Jewish clergy, all of us, to call out for justice and work against all kinds of hate,” Lewis told JTA. “We’re trying to lift up, together, ways we can work together peacefully.”