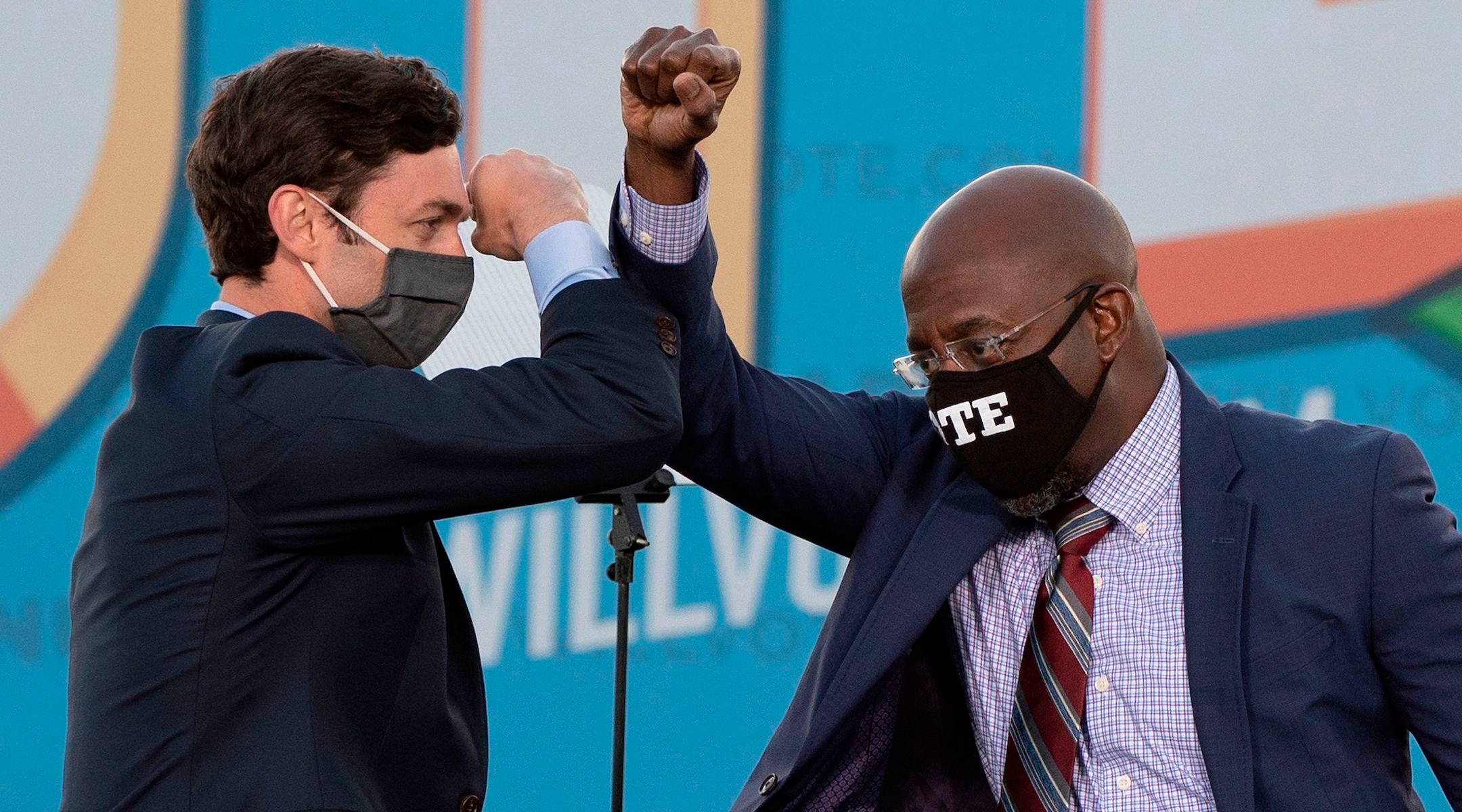 (JTA) — Two days after his election to the Senate helped tip the balance of power in Washington, Georgia Democrat Jon Ossoff found another historical echo in his victory.

In a Twitter thread, Ossoff described his trajectory from a teenage intern for John Lewis, the Georgia congressman and civil rights hero who died last year, to U.S. senator.

“And now a Jewish man he mentored and a Black man who was his pastor have been elected to represent the State of Georgia in the U.S. Senate,” Ossoff said. “I know Congressman Lewis is looking down on us today beaming with optimism.”

Congressman Lewis was one of the most important people in my life.

When we first shared a meal, many years ago, he wanted to speak with me about the importance of the alliance between Blacks and Jews in the American South.

Lewis is not the only link between Ossoff and Raphael Warnock, who like Ossoff defeated his Republican proponent in last week’s Georgia runoff election and gave Democrats a razor-thin majority in the Senate. Both invoked the historic Black-Jewish alliance during their campaigns and in the celebrations that followed their victories.

“I think Abraham Joshua Heschel, the rabbi who said when he marched with Dr. King  he felt like his legs are praying, I think he and Dr. King are smiling in this moment and we hope to make them proud,” Warnock said in a video, referring to the Jewish theologian who joined Martin Luther King on a 1965 march from Selma to Montgomery.

Ossoff, a 33-year-old Jewish documentary filmmaker, and Warnock, a 51-year-old pastor at Ebenezer Baptist, the Atlanta church where King preached until his 1968 assassination, made history when they became the first Jew and the first African American from Georgia sent to the U.S. Senate.

For Democrats and liberals, their win became a save-the-world moment, particularly as it coincided so starkly with President Donald Trump’s refusal to concede the election to President-elect Joe Biden reaching a violent crisis. They bring Senate Democratic representation to 50, and on Jan. 20, once Kamala Harris is sworn in as vice president and gets a tie-breaking vote, the Senate will flip, creating a wholly Democratic-led government.

They also represent an alliance that lagged for decades after its 1960s heyday and that in recent years has been revived, according to Jewish Democrats in the state, particularly in areas like improving health care and justice reforms.

“They campaigned together effectively as a ticket,” said Michael Rosenzweig, an Atlanta consultant who is involved in state Democratic politics. “And they were very very open, very explicit about the importance of the fact that we had a Black pastor running alongside a young very proud American Jew.”

Others took note of the historical resonance.

A blogger on Daily Kos, the clearinghouse website for Democratic activists, took delight in a viral tweet the day after the election showing actors Will Smith and Jeff Goldblum, stars of the 1996 film “Independence Day,” enjoying their victory over an extraterrestrial menace. “The last time a black man and Jewish man saved America,” the tweet said. (Smith is Black; Goldblum is Jewish and so was his character in the movie, David Levinson.)

“Warnock! Ossoff! …  Wow,” said the Daily Kos blogger, whose pseudonym is Chloris Creator. “Comparing them to Will Smith and Jeff Goldblum of Independence Day, the black & the Jew who saved the world … I’ll leave it at that.”

Of course, Ossoff and Warnock came to be nominees not by design, but by fending off others in the primaries. Ossoff faced incumbent Republican David Perdue in a conventional challenge: Perdue was ending his freshman six-year term in the Senate. Neither man got a majority and, according to Georgia law, that triggered an automatic run-off on Jan. 5.

(Georgia’s unique runoff system was advanced in the 1960s by white supremacist state legislators who did not want an African American elevated to office by winning a plurality.)

Similarly Warnock faced Kelly Loeffler, a Republican whom Gov. Brian Kemp named as interim senator a year ago, when neither secured 50% of the vote in the November election.

Still, once it was determined on Nov. 3 that Warnock and Ossoff would, in an extraordinary circumstance, be running alongside one another, they seized the coincidence of history and repeatedly played up the Black-Jewish alliance. So did the Jewish Democratic Council of America, which ran ads in the state.

It was a natural gambit, said Ellen Rafshoon, a professor of history at Georgia Gwinnett College. Rafshoon, like Ossoff, is a member of The Temple, the Reform synagogue in Atlanta white supremacists bombed in 1958 because of its support for civil rights. The Temple and Ebenezer Baptist join once a year for the Shabbat coinciding with Martin Luther King Day and coordinate activism.

“We’ve seen him preach, I mean Warnock is familiar to us as a minister,” Rafshoon said. “I was involved in a racial justice effort at the synagogue, in which we collaborated with Black prosecutors, and Black activists, and so for me it’s nothing different.”

For decades, the Black-Jewish alliance was relatively quiescent. Atlanta’s Jewish community was more conservative and Republican than its northern counterparts. Home Depot co-founder Bernie Marcus, a major Republican donor from Atlanta and a backer of Donald Trump, is also a major donor to local Jewish causes, and helped shape the tone.

That began to change after Trump’s election in 2016: Liberals in the suburbs who had believed they were outliers saw their neighbors come out against Trump. A galvanizing moment was Ossoff’s run for Congress in a 2017 special election in an Atlanta-area district previously believed to be deep red Republican. He came close to winning it, and a Black Democrat, Lucy McBath, flipped the district a year later. 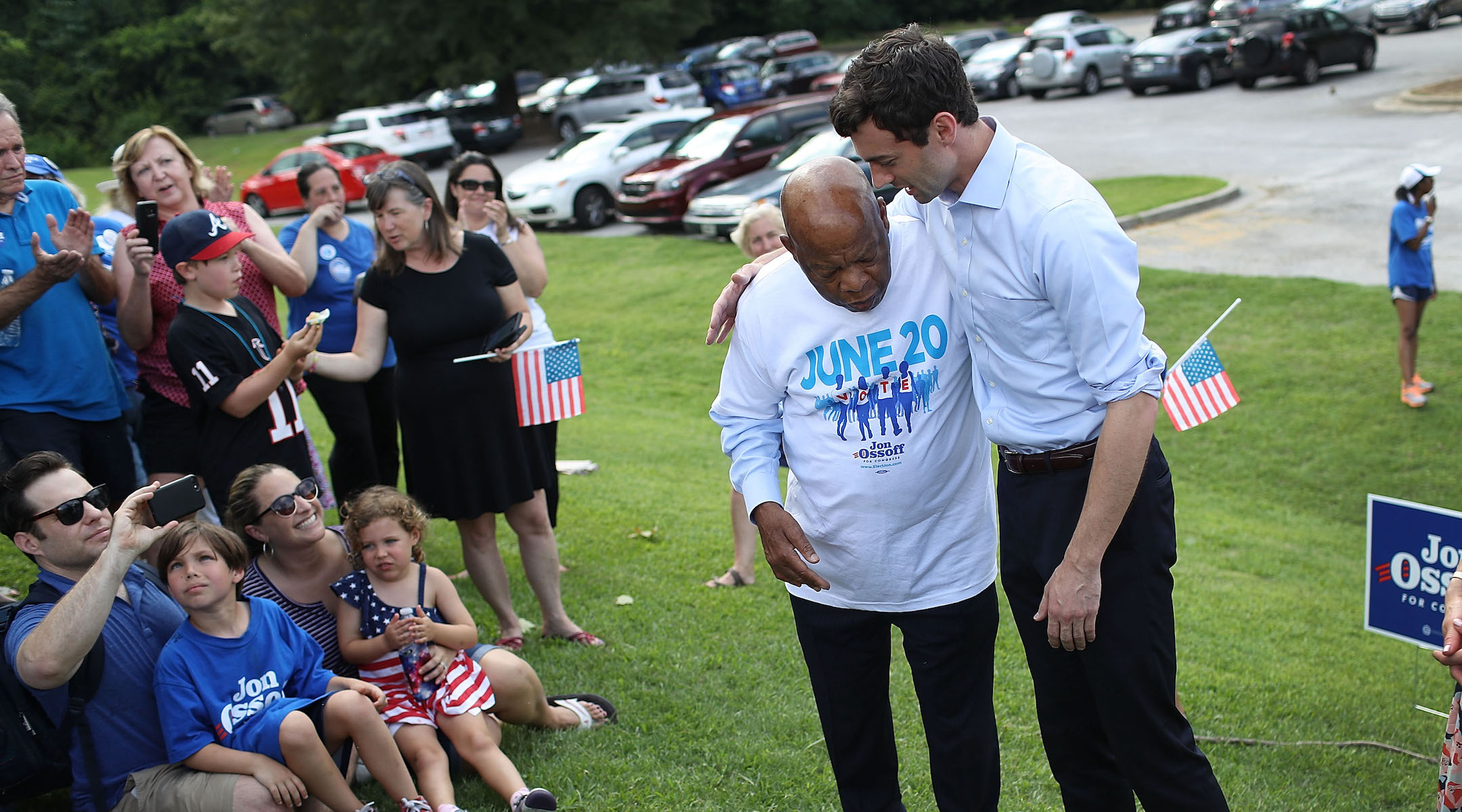 Jews and women were particularly galvanized by Ossoff’s near-win, and then, just weeks later, by the deadly white supremacist march in Charlottesville, Virginia, and Trump’s equivocation in condemning the marchers.

“Trump and the Republican Party kind of pushed us out of complacency,” Rafshoon said. “Yes, sure, we’d always kind of been activists, but now because it was so obvious,” starting with Charlottesville. There were, she said, “so many very threatening things happen[ing] that aligned our communities with fear.”

The alliance is one driven in part by the fact of Atlanta is a Black-majority city. Atlanta’s Jewish Community Relations Council is a locus for Black-Jewish activism, and the city’s American Jewish Committee branch is a convenor of the Atlanta Black/Jewish Coalition, founded in 1982. The city is the hub of Project Understanding, a program that brings together blacks and Jews in their 20s and 30s to study the civil rights era. Much of the work of the Atlanta chapter of the Jewish social justice network, Repair the World, is focused on how Jews can be better allies with African Americans. It runs a course on “Jewish Racial Justice Literacy.”

All those factors would have been reason enough for a close alliance between Warnock and Ossoff. But their rivals, unwittingly or not, drove them closer together with attacks that appeared tainted by bigotry. Perdue ran Facebook ads which enhanced Ossoff’s nose to make it look larger. Perdue pulled down the ads but did not apologize, and Ossoff called him out for anti-Semitism at a debate.

Loeffler ran ads featuring video from Warnock’s past sermons, depicting him as an anti-American radical (including for tough statements critical of some Israeli policies). Analysts said the ads may have backfired and driven Black voter turnout because they appeared to delegitimize Black preaching, which does not shy away from treating the political issues of the day.

For many savoring the Democrats’ victory, Ossoff and Warnock are symbols of something larger than what they can deliver as members of a Senate majority.

Bend the Arc: Jewish Action, a liberal activist movement, engaged in a get-out-the-vote campaign in the state.

“To see that Georgia now has its first Black senator and its first Jewish senator, those are incredible signals and symbols of what it means to become truly an inclusive multiracial democracy, which feels like a fundamental pillar for whatever comes next,” said Stosh Cotler, the movement’s CEO.

RELATED: Jon Ossoff: Everything you need to know about the newest Jewish Democratic senator