In Atlanta, Jewish hopes for ousting Trump in 2020 are complicated by the race question 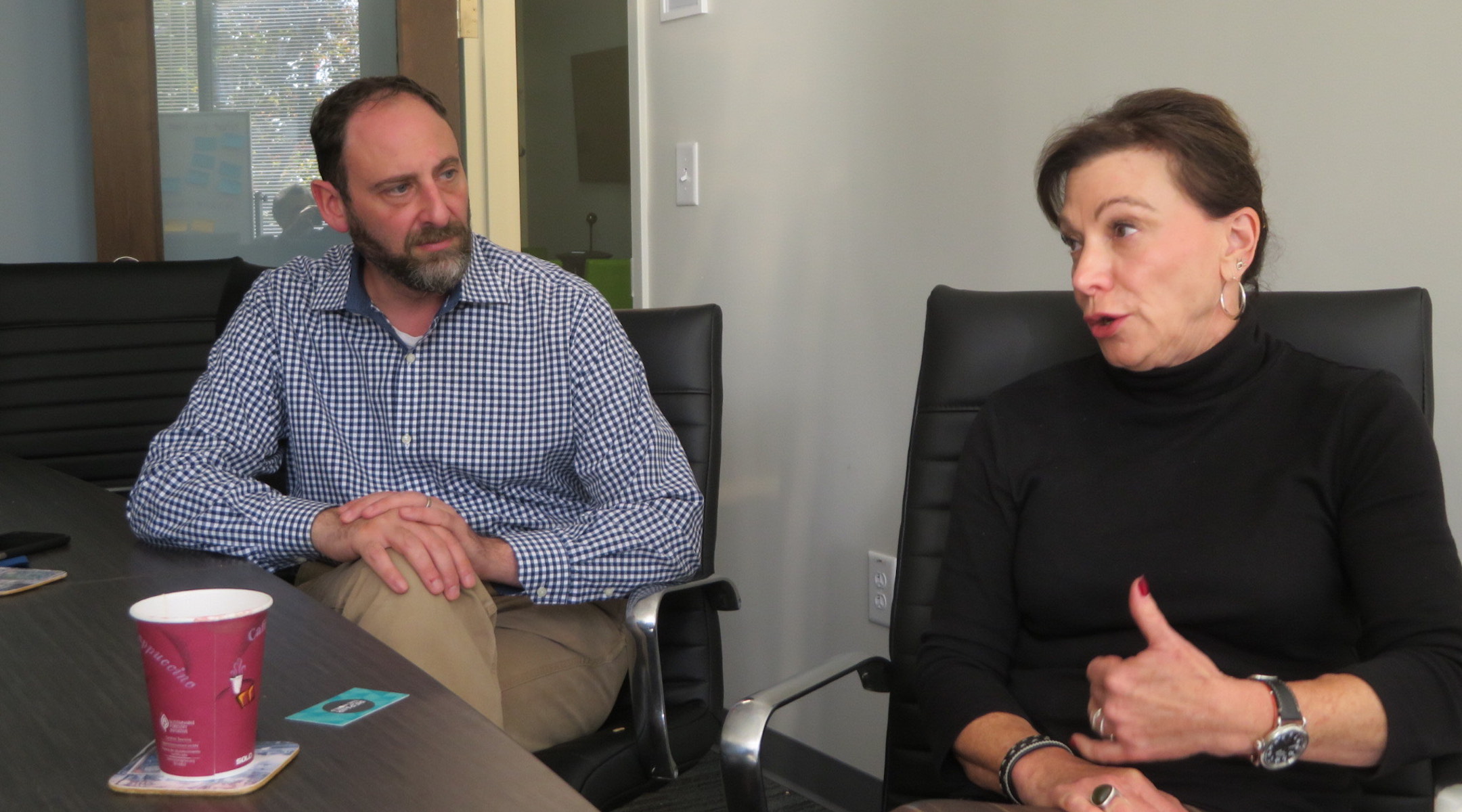 Andrew Lewis listens to Abbie Fuksman during a discussion about the city's Jewish community ahead of the 2020 elections held at the Atlanta offices of the American Jewish Committee, Nov. 21, 2019. (Ron Kampeas)
Advertisement

ATLANTA (JTA) — For Jewish voters, Bernie Sanders mentioning the Palestinians seemingly out of nowhere during last week’s presidential debate here was a striking moment. But for some Jews in this state, what resonated most was the applause from a majority black audience.

The setting for the most recent Democratic debate was a gleaming symbol of African-American success: film mogul Tyler Perry’s new studio complex in the southwest part of this city. Much of the crowd in the soundstage named for Oprah Winfrey was black, and they clapped when Sanders said that while he is pro-Israel, “we must treat the Palestinians with the dignity they deserve.”

“It goes to the heart of what I consider to be the dangerous problem of intersectionality,” said entrepreneur Shai Robkin, referring to the idea — first popularized by an African-American feminist scholar — that marginalized groups ought to be allies in each other’s struggles.

The debate moment captured a central tension for Atlanta’s Jewish liberals, who have been galvanized by the prospect that a changing Georgia might be the state that buries President Donald Trump’s hopes for re-election. But the path to turning Georgia blue runs through a necessary alliance with the state’s blacks, whom local Jews are struggling to understand.

One obstacle is the stubborn persistence of segregation manifest in the largely separate lives blacks and Jews lead. Another is the delicate issue of protecting fragile markers of Jewish identity, including support for Israel. As the applause demonstrated, the city’s black elite are sensitive to the Palestinian cause.

In interviews over three days with about 20 Jewish community leaders and political activists, the Bernie moment came up again and again. It wasn’t that the remark itself was controversial: being pro-Israel and treating Palestinians with dignity is not inherently contradictory. What stood out was its seeming gratuitousness — Sanders was answering a question about Saudi Arabia — and how well-received it was.

“If you listen to what Sanders was saying, yeah the Israelis need to be more humane,” said Michael Rosenzweig, an NGO consultant who also is a Democratic organizer. “The fact that it was gratuitous means that this is weighing a lot on his mind.”

Some 120,000 Jews live in this majority African-American city, and the upcoming presidential election is bringing to the fore a reckoning that has been building for years — a divide felt acutely in a city that was a hub of the black-Jewish coalition that helmed the civil rights movement.

Even among those too young to remember it, there is palpable nostalgia for the period from the 1950s to the 1970s when relations were at their peak. Members of The Temple, the city’s oldest Reform synagogue, talk about the bombing of the synagogue by white supremacists in 1958 as if it happened last year.

“What does coalition look like?” asked Lily Brent, the executive director of the local chapter of Repair the World, a Jewish social justice group. “We had a clear model in the 1960s, in the 1980s.”

Now, she said, “we are all vested in the future of this city and are leading parallel lives that can be attributed to the long history of structural racism.”

Jews here note repeatedly that half of the state’s counties lack even a single Ob-Gyn doctor, an absence that disproportionately affects blacks. Black women in Georgia lead the country in maternal mortality rates. Blacks disproportionately are victims of gun violence.

The distances are physical as well. Downtown Atlanta is relatively integrated, but in the suburbs, the segregation is striking. At a Starbucks near Perry’s studios, all the patrons on a recent afternoon were African-American. In the northern suburbs of Buckhead and Sandy Springs where the Jewish community is concentrated, they were nearly all white.

Atlanta’s Jews are treading lightly into its breach.

Efforts to bring blacks and Jews together have been underway for years. The community has a longstanding and loving relationship with Rep. John Lewis, the civil rights icon who represents Georgia’s 5th District, which includes most of Atlanta. Programs have brought local politicians like Stacey Abrams, who nearly won the governorship in 2018 and now leads a voting rights movement, to Israel. Atlanta is also the hub of Project Understanding, a program that brings together blacks and Jews in their 20s and 30s to study the civil rights era.

After Trump’s election, Jewish outreach to the black community burst beyond institutional confines and into grassroots organizing. Jewish women in the suburbs who had written off the state as perpetually Republican found themselves joining the Women’s March and then organizing.

The first locus of the coming together was a special election just months after Trump’s election. Jon Ossoff, a Jewish Democrat, came close to ending decades of Republican representation in the state’s 6th District, which covers parts of Atlanta and its suburbs. A year later, Lucy McBath, an African-American woman, succeeded. Jewish women figured large in Ossoff’s campaign, and they rallied again for McBath, who lost a son to gun violence. 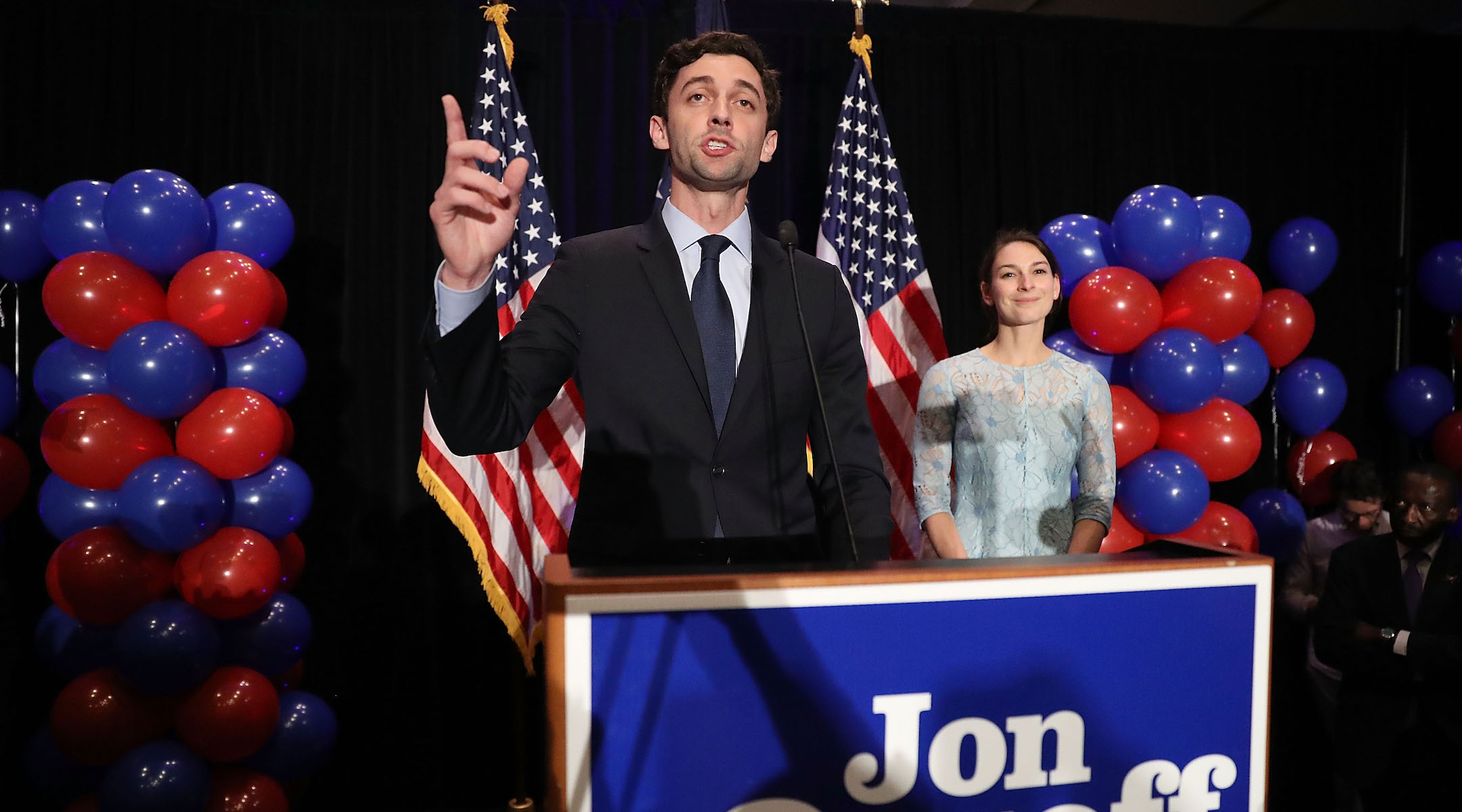 Jon Ossoff speaks in Atlanta after losing in a special election for a House seat, June 20, 2017. (Joe Raedle/Getty Images)

“The Ossoff election came so quickly after the presidential race, there were so many women who were upset, it gave them something they could sink into,” said Abbie Fuksman, a retired health care executive.

Elaine Goldberg DeSimone said Trump’s election propelled her to the Women’s March in Washington, D.C., then to back Ossoff, and then to her door-knocking for McBath, who had spoken at The Temple about gun violence.

“The gun violence issue is something that really concerns me, and she was the best advocate for that,” DeSimone said. “I will tell you, most of the survivors of gun violence are black, and it’s an issue white women have to stand up to.”

But it is concerns about rising bigotry, an issue that afflicts both blacks and Jews, that has really fueled her activism.

“Charlottesville should have been the straw that broke the camel’s back,” DeSimone said of Trump’s equivocations after the deadly right-wing march in Virginia in 2017.

David Abroms, an Atlanta businessman who unsuccessfully sought the Republican nomination in the 2017 special congressional race, said he worries about Trump’s foreign policy, which he sees as a retreat from global leadership, and about the party’s prospects if the suburban vote slips away.

“This looks like a disaster coming,” Abroms said. “Losing the suburbs the way Republicans have under Trump, I worry about the future of the Republican Party.”

A Jewish lay leader who voted Republican in the past said Abroms is far from alone. Jews who vote for Republicans are moderates, the leader said, and now they’re homeless.

“What we’re seeing statewide is that being a moderate, you end up with choices far from where the Jewish community is,” said the leader, who asked not to be named.

Andrew Lewis, an education policy lobbyist, said the way forward is to renew the Jewish coalition with blacks. He described a project at The Temple, which he attends, to advocate for the expungement of criminal records.

Matt Weiss, a lawyer who serves on the boards of several local Jewish groups, offered this thought.

“The Jewish community,” he said, “needs to a better job of showing up on issues important to the black community.”