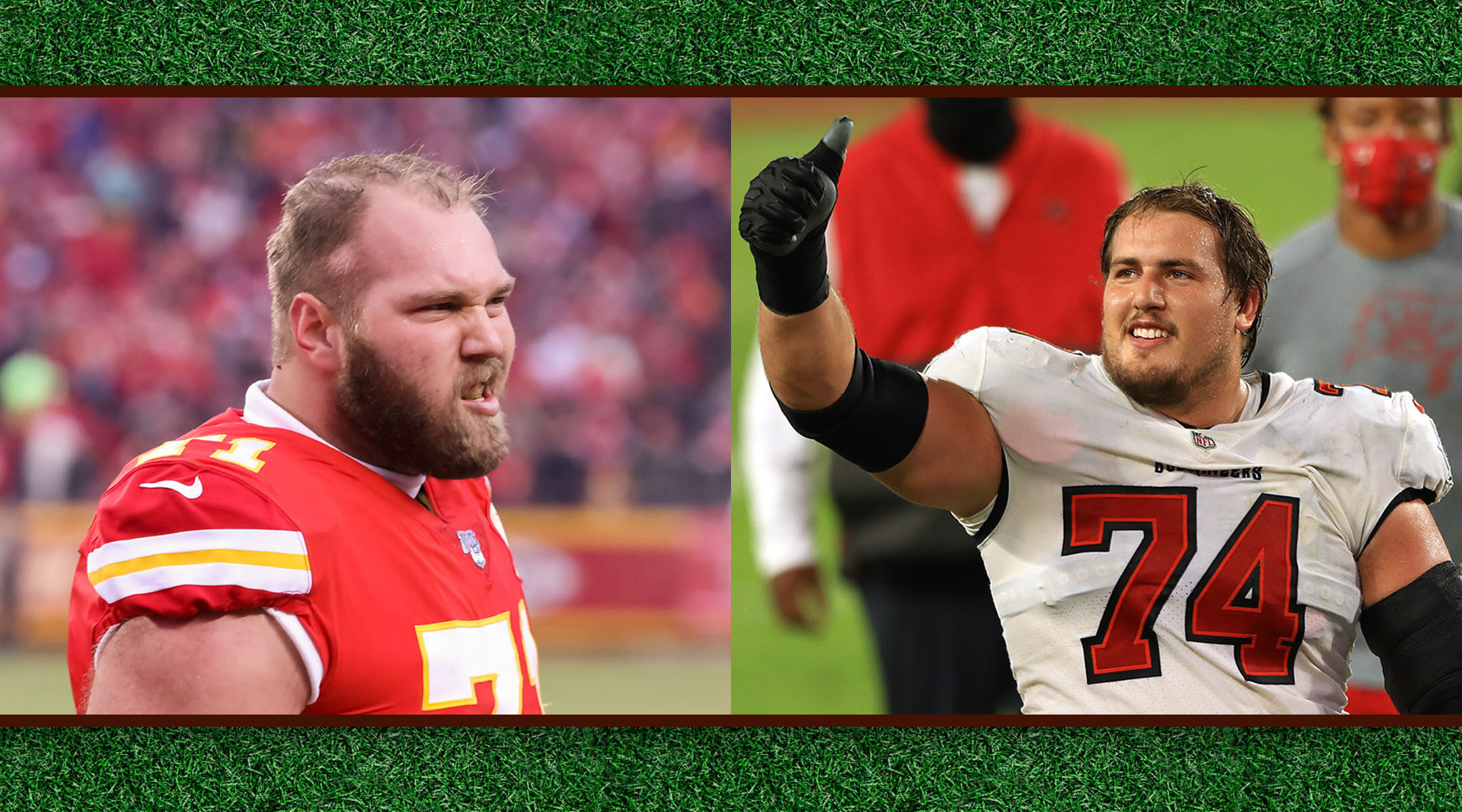 (JTA) — Here’s a football bet you probably could’ve gotten long odds on before the season started: each Super Bowl team having a Jewish offensive lineman.

Both are standout players, but only one — Ali Marpet, a sixth-year pro for the Tampa Bay Buccaneers — is expected to suit up for the NFL championship game on Sunday in his home stadium.

(That’s a first, incidentally, that a team is playing in the Super Bowl at its own field.)

Mitchell Schwartz, the Pro Bowl tackle for the Kansas City Chiefs, has been sidelined by injury since October and is likely out for Super Bowl LV, when the Chiefs aim to retain the title they won last season with a 31-20 victory over the San Francisco 49ers.

Marpet, 27, who plays left guard, has been especially strong in protecting Tom Brady, not allowing a sack of the iconic quarterback all season. He is the son of a musician mother and fashion videographer father from New York’s suburban Westchester County who hosted Shabbat gatherings for family and friends.

He attended Hobart College, arriving unheralded at the school of some 2,400 students in upstate New York. At the Division III level, meaning the colleges do not award athletic scholarships and their players almost never reach the pros, Marpet grew to over 300 pounds and combined his athletic prowess and a strong work ethic to make himself into a bona fide NFL prospect. The Bucs picked him in the second round of the 2015 NFL Draft.

Marpet, a Birthright Israel alumnus, has enjoyed a standout career, thus earning a five-year, $54 million contract a few years ago, with half in guaranteed money.

“There were a lot of things along the way that had to line up almost perfectly for me to end up where I am,’’ Marpet told the New York Post last week. “There wasn’t one moment that made the difference. It was a collection of moments. Me going to Hobart instead of trying to try to walk on at a D-I AA school or maybe going to another D-III school that didn’t take football as seriously [as Hobart]. There were so many ways this could have played out.’’

His father, Bill, said his son shuns the spotlight.

“He doesn’t read any of the stuff written about him,” the elder Marpet said in the Post story. “He just does what he does.’’

Now he’s doing it in the biggest game of all with the hopes of becoming a champion like Schwartz.

Should Marpet’s Bucs prevail, it would be the second Super Bowl championship for the Glazer family, who own the team. Tampa won the franchise’s only NFL crown in 2003.

Malcolm Glazer, a Jewish billionaire businessman, bought the team in 1995 for $192 million, which at the time was a league record. It’s worth about $2 billion now.

Glazer died in 2014 and his children have maintained ownership and run the business — quite well, it seems, bringing in Brady from his stellar New England Patriots career along with a number of talented veterans and young players.

On the Chiefs side, a back injury put Schwartz on the shelf, ending a playing streak of 134 games. The 31-year-old, in his ninth season, is one of the top right tackles in the league and will be missed by Kansas City’s high-powered offense led by quarterback Patrick Mahomes.

The Southern California native isn’t shy about expressing his Jewishness. Schwartz and his brother, Geoff, who also was an offensive lineman in the NFL, wrote a book in 2016 about football and their lives growing up titled “Eat My Schwartz: Our Story of NFL Football, Food, Family, and Faith.” They were the first Jewish brothers to play pro football since Ralph and Arnold Horween in 1923.