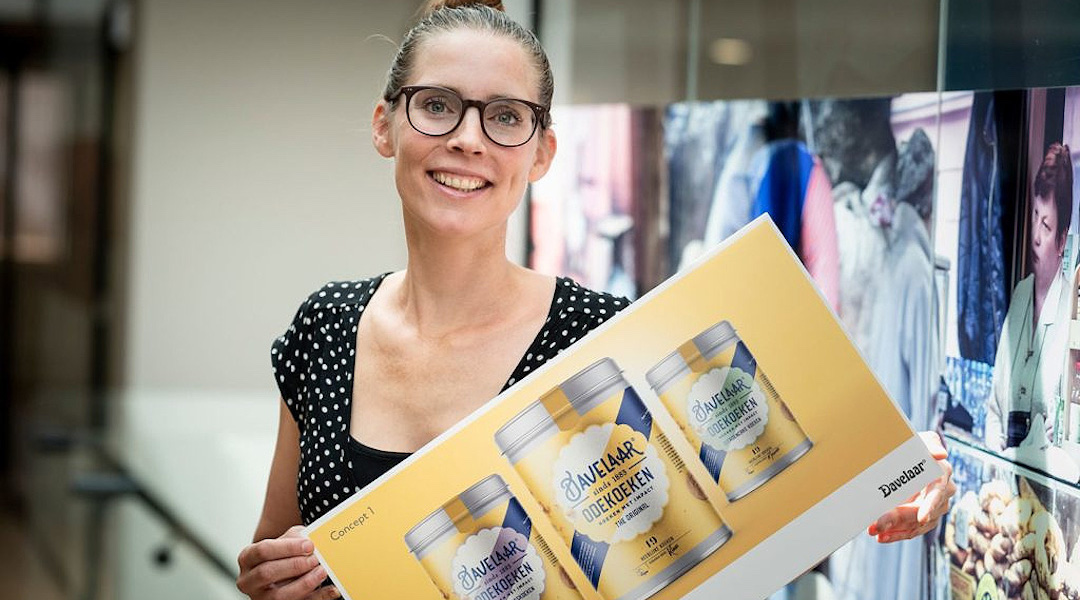 Renee Pater presents the design for the new label that her company, Patisserie Pater, produces in Zwaagdijk, the Netherlands. (Patisserie Pater)
Advertisement

Exactly how jodenkoeken (also spelled jodekoeken) got their name is unclear, but they have been a feature of Dutch teatime since at least the 19th century.

Whatever the etymology, Dutch Jews don’t seem to mind having a cookie named after them. Many even buy them as a joke to bring to relatives abroad or even give to each other.

“I know it sounds strange to Americans, but there’s never been an issue around jodenkoeken,” said Ronny Naftaniel, who led Dutch Jewry’s watchdog group on anti-Semitism for 37 years before becoming vice chair of the Central Jewish Board of the Netherlands a decade ago.

Things changed on Friday: The company behind the Netherlands’ oldest and best-known jodenkoeken brands announced that it was changing the cookie’s name in a bid to “help create a more inclusive society.”

Patisserie Pater wrote on its website that the Davelaar-brand jodenkoeken will be called “odekoeken” — Dutch for “ode cookies.”

Meanwhile, several other companies also manufacture jodenkoeken, and one, Lotus Bakeries, said on Saturday that it was considering changing the name, too, as “currently [the name] can lead to sensitivities.”

The name change comes at a time when companies the world over are assessing their product lines to ensure that they are culturally appropriate — a reckoning that is hitting the food world hard. And the Netherlands, where the Dutch Christmastime tradition of wearing blackface is a matter of open debate, does feature a few desserts with names that have drawn criticism for being insensitive.

But Dutch Jews say they didn’t see any reason for jodenkoeken to get a new name.

“Davelaar can of course name their products as they please, but jodenkoeken really is not something I’m offended by, and I don’t know of anyone who is,” said Ronit Palache, a 36-year-old Dutch-Jewish journalist and author who said she detected “woke overzealousness” in Patisserie Pater’s decision.

She added, “When you start making corrections no one needs or asks for, you’re just creating resistance and friction over nothing.”

Eddo Verdoner, the chairman of the Central Jewish Board of the Netherlands, praised Patisserie Pater for “thinking of others in times of polarization.” But he told the news site NU that Jewish organizations “never had any issue with jodenkoeken, which never had negative connotations.” 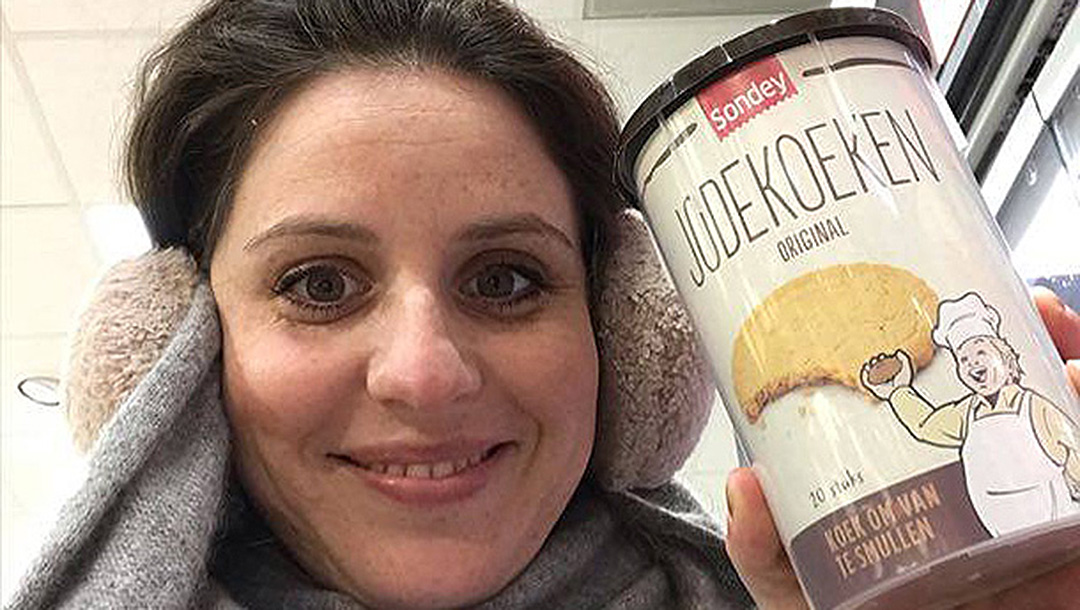 Ronit Palache holds the Sondey brand of jodenkoeken in Amsterdam, Feb. 22, 2021. That brand has not changed the cookie’s name. (Palache)

How the cookies got their name is not known, but there are several theories, according to Jonah Freud, who published a book in 2012 about Dutch-Jewish cuisine.

Under one theory, the jodenkoeken’s simple recipe — they require only butter, flour and sugar – was created by a non-Jewish baker whose last name was de Jode. But that man, if he existed, has never been identified.

Another theory, Freud said, holds that an unnamed Amsterdam Jew sold the original recipe to Lotus Bakeries, which made it famous.

According to a third theory, the biscuits were named jodenkoeken because of their simplicity at a time when many Amsterdam Jews were poor.

“But then they have lots and lots of sugar, more than other cookies, which would have been a luxury product in the 19th century, so they weren’t your typical poor people’s food at all,” Freud said.

A fourth hypothesis is that the cookies were introduced by Sephardic Jews who traveled on shipping lines that connected Northern Europe with the Iberian Peninsula’s Bay of Biscay. Advocates for this theory point to the fact that some parts of Norway and Denmark also have a very similar pastry called jodekaker in Norwegian and Danish, while Iceland has a sugarless variant called gyðingakökur — all of which are far less popular and well known than jodenkoeken are in the Netherlands.

Whatever their origins, Freud said, “Everybody likes jodenkoek, in the Netherlands and beyond. So why would we Jews want to distance ourselves from such a tasty treat?”

Many Dutch Jews have jodenkoeken stories. Palache recalled laughing when a former boyfriend, who wasn’t Jewish, brought home jodenkoeken. It was the first time she had them in her home.

Barry Mehler, a New York-born Jewish Amsterdammer and organizer of the city’s main annual Hanukkah concert, also bought jodenkoeken for laughs once to give as a gift to a Jewish colleague from abroad. Asked to explain the joke, Mehler said, “What’s to analyze? It’s just comical. A Jew giving Jew cookies to another Jew.”

He called the name change “ridiculous — unless it’s a marketing strategy that they’re just using to get recognition for their new brand, the ode cookies.”

“They’re cookie-washing the jodenkoeken is what they’re doing,” Mehler said.

Roland Vos, who heads the food and drink department at the Jewish Cultural Quarter, a collection of cultural institutions, lamented the name change.

“I had hoped this was only a prank for Purim,” he wrote on Facebook, referring to the festive Jewish holiday being celebrated this week.

Dutch Jews haven’t always been so nonchalant about desserts named for them.

Naftaniel said he received dozens of complaints in 2005, when he was heading the anti-Semitism watchdog group, from Jews about the reintroduction of a discontinued candy called jodenvet, or “Jew fat.” The name is offensive because it “makes people think about grilling Jews,” Naftaniel said at the time; he said then that jodenkoeken did not carry any problematic connotations. The candy was renamed “chest honey” following the protest.

More recently, Dutch confectioners changed other desserts’ names. One product, a a marshmallow-cream cake coated with chocolate, was called negerzoen, or “Negro kiss.” It now goes by just Kisses. (The cookie is a lot like an Israeli Krembo.) And the chain store HEMA, something of a Dutch Target, last year renamed moorkopen, or “moors’ heads,” as chocolate balls.

“The difference between jodenkoeken and negerzoenen is that the latter did offend a lot of Black people,” Palache said.

Patisserie Pater, which makes Davelaar, said it was not responding to any outside pressure around jodenkoeken when it changed the name.

“What a shame, we always enjoyed it,” Birgitta van Blitterswijk, a Dutch-Jewish art historian, wrote on Facebook about the company’s decision. “The people who decided this should have spoken to the Jewish community instead of deciding for them.”

“But it’s both unnecessary and unfortunate,” Moszkowicz, 39, said. “Because finally there’s something named for the Jews that’s nice and that everyone likes — and they take it away from us to be politically correct.”