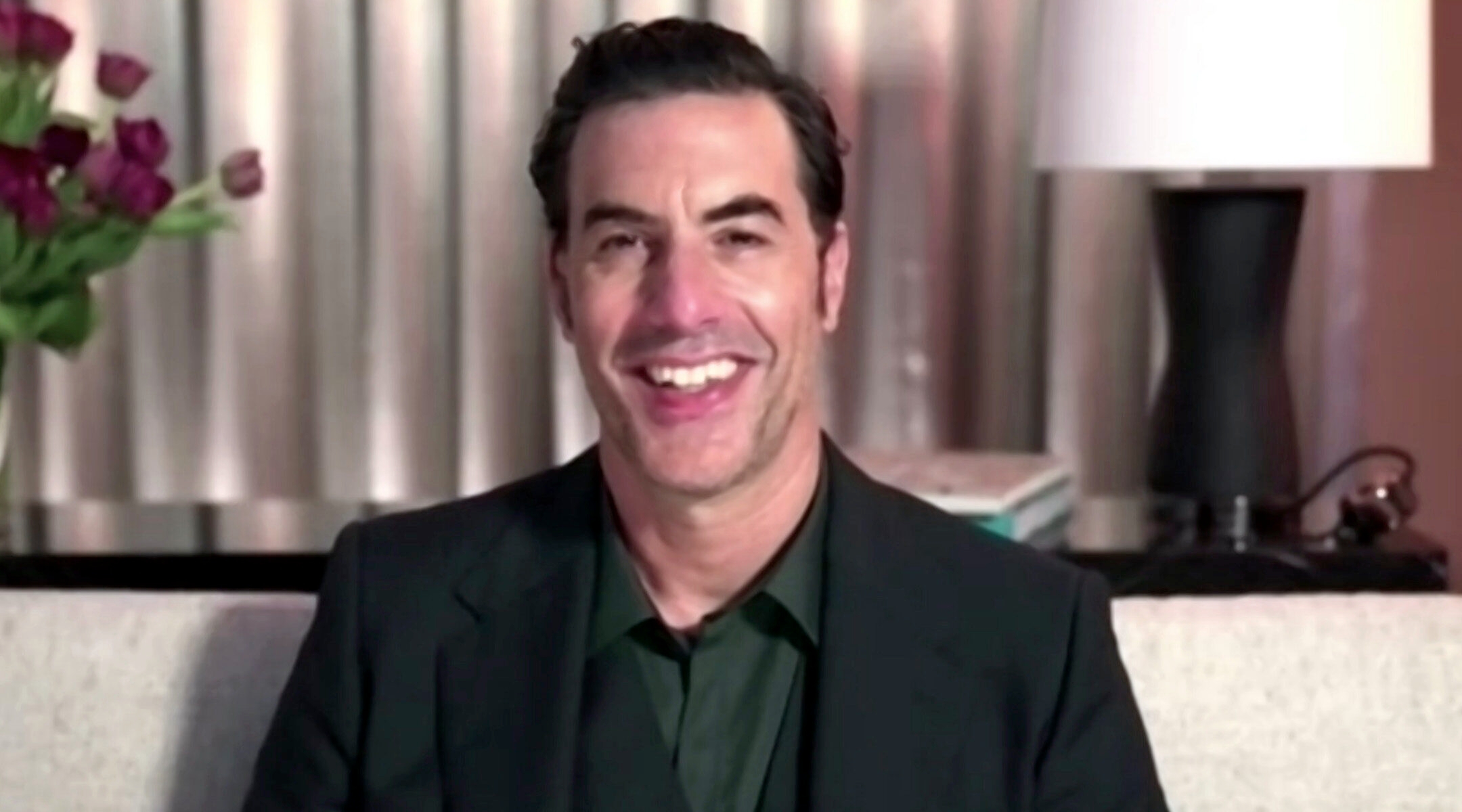 (JTA) — Sacha Baron Cohen’s Borat character is going out on a high note.

Cohen won best actor in a comedy or musical, and his “Borat” sequel upset the Disney+ adaptation of “Hamilton” by winning best film in the category at the Golden Globes on Sunday night.

Like its predecessor, “Borat Subsequent Moviefilm” poked fun at the blatant anti-Semitism found in parts of Eastern Europe. It features a scene with Holocaust survivor Judith Dim Evans in a synagogue who helps Borat (almost) come to grips with his backward views about Jews.

But just before the film’s release, Evans’ daughter sued Cohen, claiming that her mother (who passed away after filming) did not want to appear in a comedy. That was just one of the many lawsuits and obstacles that Cohen said he has had to endure as a result of his prank disguise method of making comedic films and shows, which beyond “Borat” include the Showtime series “Who is America?”

And that’s why he said recently that his disguise days — the Borat character included — are over. In his acceptance speech for the best comedy actor award, Cohen thanked his bodyguard, who he said protected him from getting shot twice during the filming of the Borat sequel.

“Hold on, Donald Trump is contesting the result,” he said after winning the actor award. “He’s claiming that a lot of dead people voted, which is a very rude thing to say about the HFPA,” the Hollywood Foreign Press Association.

Despite the historic nature of the Globes ceremony — hosts Tina Fey and Amy Poehler were featured in a split screen from opposite coasts, and small in-person audiences were made up only of essential workers who were all tested for COVID-19 — the show had its usual share of fun Jewish moments. Some Jewish stars won marquee awards, while others lost in major categories.

The final season of “Schitt’s Creek,” the riches-to-rags comedy featuring the Jewish father-son team of Eugene and Dan Levy, finished its historic award show run with a couple of accolades: Golden Globes for best TV comedy series and best actress in the same category for Catherine O’Hara.

Inclusion was the theme of the evening, as several presenters — including the show’s hosts — called out the Hollywood Foreign Press Association for not having a single Black member, and for snubbing acclaimed shows by Black creators, including HBO’s “I May Destroy You.” Multiple Globe winners also used their acceptance speeches to push the film and TV industry to work harder at bringing diverse voices to the table.

Dan Levy put the theme at the heart of his speech.

“This acknowledgement is a lovely vote of confidence in the messages ‘Schitt’s Creek’ has come to stand for: the idea that inclusion can bring about growth and love to a community,” he said. “In the spirit of inclusion, I hope this time next year this ceremony reflects the true breadth and diversity of film and television being made today because there is so much more to be celebrated.”

Sorkin, the heralded Jewish screenwriter, won his third Globe for best screenplay for a drama film, for “The Trial of the Chicago 7,” which chronicled the backstory of the riotous protest at the 1968 Democratic National Convention.

Cohen was nominated as well for best actor in the drama category for his performance as Abbie Hoffman, a very Jewish icon of the anti-war movement of the 1960s and ’70s. (He was beaten out by the late Chadwick Boseman for “Ma Rainey’s Black Bottom.”)

In his acceptance speech, Sorkin said that Cohen emailed him a quote from Hoffman during each day of filming. (Cohen wrote his college thesis at Cambridge University on the American civil rights movement, so he’s pretty familiar with the era.)

“None of them ever made it into the film, but I saved the emails,” Sorkin said. “I don’t always agree with everything that characters I write view or say, but here’s something Abbie said: ‘Democracy is not something you believe in or a place to hang your hat. But it’s something you do. You participate. If you stop doing it, democracy crumbles.’”

He added: “I don’t need anymore evidence beyond what happened on Jan. 6 to agree with this.”

Norman Lear gets a “progressive” tribute

Lear, the Jewish creator of several memorable TV shows, is still winning at 98.

The Globes gave him the honorary Carol Burnett Award, which since 2019 has recognized “outstanding contributions to television on or off the screen.”

In narrating a video tribute to Lear, comedian Wanda Sykes called him the “most progressive” television producer in history for bringing uncomfortable issues around race and class into mainstream American TV screens through series such as “All in the Family” and “The Jeffersons.”

Nixon — the actress, former New York gubernatorial candidate and Congregation Beit Simchat Torah member — was nominated for best supporting actress in a dramatic TV series for her role in the “One Flew Over the Cuckoo’s Nest” spinoff “Ratched.” She didn’t win, but she made plenty of headlines for her appearance via video stream, which included a life-size cardboard cutout of Bernie Sanders in his now iconic Inauguration Day pose wearing a pair of homemade mittens.

Stiller presented the best actress in the musical or comedy category, but got everyone’s attention by bringing food to the stage.

After lamenting a full year of the COVID-19 pandemic, the Jewish actor said: “Like many of us, I’ve used that time to really look inward and grow. I’ve come to fully understand the nature of cryptocurrency. I read a book. I finally got around to dying my hair gray. And like so many other resilient Americans, I learned to bake.”

Then he revealed a banana bread in the shape of a Golden Globe trophy.

Other Jewish winners and losers

– Songwriter Diane Warren won her second Globe for best original song. Her tune “Io si” featured in “The Life Ahead,” in which the iconic actress Sophia Loren plays a Holocaust survivor.

– Shira Haas was nominated but didn’t win the best actress in a limited TV series category. She drew acclaim for her performance in “Unorthodox,” about a young Hasidic woman who leaves the community.

– Jane Levy was nominated in the best actress in a comedy or musical category for her role in “Zoey’s Extraordinary Playlist,” but lost to O’Hara.

– Al Pacino is not Jewish, but he played a Jewish Nazi hunter with a Yiddish accent in Amazon’s “Hunters.” He lost in the best TV drama series actor category.