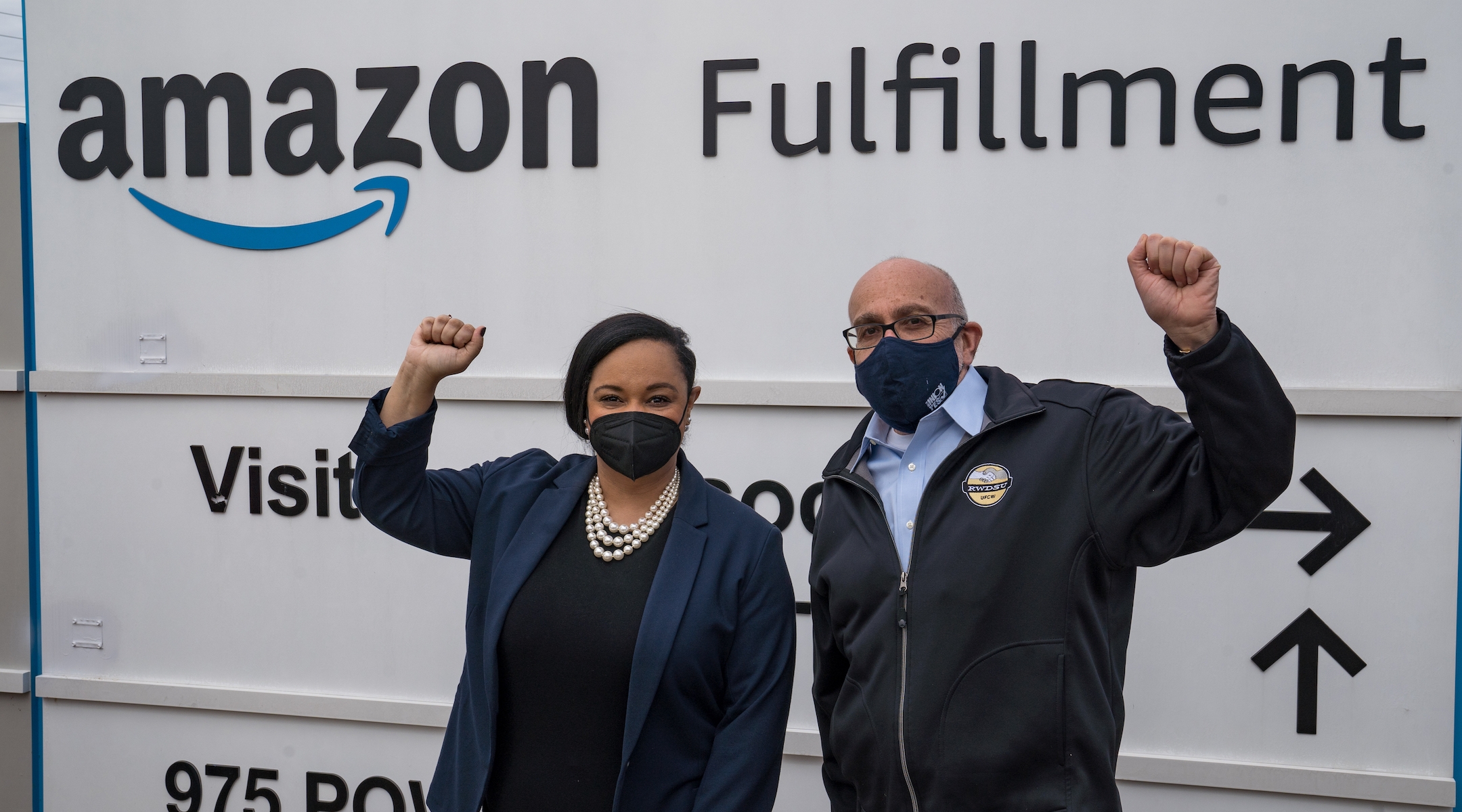 Rep. Nikema Williams of Georgia and Stuart Appelbaum, president of the Retail, Wholesale and Department Store Union, visit the Amazon Fulfillment Center in Birmingham, Ala., after meeting with workers and organizers involved in the facility's unionization effort, March 5, 2021. (Megan Varner/Getty Images)
Advertisement

This story has been updated with Amazon’s response.

(JTA) — A historic union battle in Bessemer, Alabama, could result in the country’s first organized Amazon warehouse – and it’s thrust a longtime Jewish union leader back into the spotlight.

Stuart Appelbaum is president of the Retail, Wholesale and Department Store Union, which represents more than 60,000 workers in retail, food and warehouse jobs nationwide. The union, known as RWDSU, is vying to represent the nearly 6,000 warehouse workers in Amazon’s Bessemer fulfillment center, and Appelbaum, who has led the union for more than two decades, has been a constant presence in the town and in the media during the months-long union vote.

As a child in Hartford, Connecticut, Appelbaum was president of his Conservative synagogue’s USY chapter and attended Camp Ramah. He graduated from Brandeis University and Harvard Law School.

Today, he and his husband reside in New York, where in addition to RWDSU, the 66-year-old Appelbaum is also president of the Jewish Labor Committee. Founded in 1934 to raise awareness of Nazi atrocities in Europe, the group now works to promote solidarity between American Jews and trade unions, something Appelbaum also seeks to advance as a member of the executive council of the Conference of Presidents of Major American Jewish Organizations.

“I always had a sense that Jewish values made me want to be part of a fight for social justice, especially for working people,” he told the Jewish Telegraphic Agency.

His fight against Amazon will soon have Appelbaum facing off against another Jew: incoming Amazon CEO Andy Jassy, who will be succeeding Jeff Bezos later this year. The union fight has been messy, with Amazon’s tactics (including pressuring the county to change the traffic lights outside its warehouse and using its social media accounts to attack members of Congress) coming under intense scrutiny.

“RWDSU membership has fallen 25% during Stuart Appelbaum’s tenure, but that’s no justification for Mr. Appelbaum to misrepresent the facts,” a representative for Amazon wrote in a statement to JTA. “Our employees know the truth—starting wages of $15 or more, health care from day one, and a safe and inclusive workplace. We encouraged all of our employees to vote, and their voices will be heard in the days ahead.”

Appelbaum, who said he expects “some sort of result” in the union vote within the next week as both sides prepare to closely monitor and possibly challenge the count, spoke to JTA about his Jewish roots and what this fight has changed in the American labor movement.

JTA: How are you feeling about your union’s prospects?

Appelbaum: No matter what the vote count shows, it’s already been a huge victory. I feel that what we have done is to shine a spotlight on the abusive conditions in Amazon workplaces. We feel that people understand better now, as a result of this campaign, the extent Amazon and other employers go to bust unions. We’ve highlighted the need for labor law reform. We’ve renewed the coalition between the civil rights movement and the labor movement. I think that it’s very important that the Black Lives Matter movement said that a union is an important way to confront racism in the workplace. We have excited young people all over the country about unions once again.

And most of all, I believe that this campaign, regardless of the outcome, has already breathed new life into the American labor movement. We’ve already heard from more than 1,000 Amazon workers alone wanting to find out how they can begin organizing efforts in their workplaces.

Amazon is such a big company and is doing so many things. I’m sure many unions would have wanted to be scrapping with them right now. How is it that the RWDSU got involved in this fight?

Amazon is transforming industry after industry. It’s creating a model for what the future of work will look like. And it’s a model that we find unacceptable, where workers are dehumanized and mistreated. We could not afford to leave Amazon unchallenged, which is why this campaign was so important. When workers came to us and said that they were having real problems with their employer, and that there needed to be change, and described to us the abuse on their bodies and on their mental health, we felt that we needed to take on this fight.

The RWDSU has a long history in Alabama and a long history of involvement with the civil rights movement. The 1963 March on Washington, much of the planning for that march took place at the RWDSU offices. The march from Selma to Montgomery, the RWDSU was there providing tents along the way, as well as participating in the march itself. We were a natural place for these workers to come.

Also, we represent a lot of poultry workers in the southeast United States. And we have been very, very vocal during the pandemic about the need for better working conditions because people are getting sick and dying. And there is a blatant disregard for the health and safety of workers in the poultry industry. We had decided to launch a major organizing effort in Alabama. We started training worker organizers. And after people came to us about the Bessemer facility, we decided to focus those worker organizers on this Amazon warehouse.

Isn’t it also true that given the overall decline in union memberships over the last few decades, as well as the decimation of physical retail, your union needs this fight as much as those workers need you?

Despite our name, we’re involved in many industries. We have tens of thousands of people involved in food processing. We felt that this was the sort of campaign that really captured the zeitgeist, was really about the moment that the American labor movement needed to take on. It’s impacting not just commerce, it’s impacting logistics, technology, all sorts of things. We felt we had to take it on.

This is also not our first experience with Amazon. We were heavily involved in the fight over HQ2 in New York City. [In 2019 Amazon aborted plans to open a major office in Queens after intense criticism.] What we learned from that fight was that Amazon is arrogant and tone-deaf and can be beat. And we’re assured that Amazon will be beat, even if it’s not in this first election.

You yourself have been president of the RWDSU since 1998 —

That’s a long time. Especially with just how much the nature of work has changed in this country, do you still feel equipped to fight these big battles?

I’m more energized every day. I think we’ve been able to build an operation that’s able to take on sites like these. I’m surrounded by amazing, smart, dedicated people. The answer to that is yes.

Do the old rules of organizing still apply in big tech today?

You are also president of the Jewish Labor Committee. Do you think that organized labor is resonating with American Jews now the same way it was when this group was formed in the 1930s?

When we were formed in the ’30s, we were really focusing on what was happening in Europe to the Jewish community. And the demographics of the labor movement were different. But I’m really proud that our Jewish heritage has inspired so many Jews to align themselves with social justice. And I think that’s something we have done for generations. I feel like there is still strong sentiment in the Jewish community to stand up and support people in need, including working people.

We’ve brought resolution after resolution to the Jewish Council for Public Affairs over the years. And they’ve taken amazing stances on behalf of the Jewish community in support of workers and workers’ rights.

I’m also on the executive committee of the Conference of Presidents of Major American Jewish Organizations. And I’ve brought to the conference people like Rich Trumka, the president of the AFL-CIO, and Tom Perez, when he was chair of the Democratic National Committee, and Kamala Harris, when she was running for president. And I’m really impressed with the positive response they all received from across the political spectrum.

You have invoked a Passover metaphor during the Amazon fight.

I’m not quite sure if I actually did refer to Jeff Bezos as Pharaoh. [Laughs] But the point I was making was really that the struggle of the Israelites to escape oppression and achieve freedom is really comparable, in many ways, to the struggle of working people to escape what they see as oppression from our workforce, and to try to gain their own dignity and justice.

For instance, what really bothers workers [at Amazon] is they feel like robots are being managed by robots. They feel dehumanized. Every motion they make is monitored and surveilled. They’re expected to work at a pace that’s unbearable. Amazon facilities are not air conditioned, no matter how sweltering heat is, because the robots don’t like the air conditioning. People are going back to feeling like robots that are managed by an algorithm. They’re disciplined by an app on their phone. And they’re fired by a text message. These are not working conditions that we want to become the norm going forward. And these are the sorts of conditions that people are trying to escape.

And I think in many ways you could see parallels with the stories of anybody who was suppressed, including the time of Moses.

So do you see the Passover story as a union story?

I see the Passover story as being a story about freedom that includes the struggle of working people for freedom. A few years back, on the 50th anniversary of the assassination of Dr. King, the Jewish Labor Committee held a labor seder which brought together leadership in the Black community, the labor community and the Jewish community. The Jewish Labor Committee for many, many years has been holding labor seders, every Passover, where we were tying union struggles to the story of Passover. And I think that the union story is one of the many stories that connects with the message of Passover.

How do you see Jews fitting into this fight?

I think all Americans need to be paying attention to this fight. It’s going to impact workers no matter what they do or where they work. The Jewish community should want a world of work where all people are treated with dignity and respect, both at the workplace and outside the workplace.

The Bible uses words very sparingly. With a few words, you could tell the story of a generation. There are no extraneous words; there is only one place in the Torah where a word was repeated. And that’s “tzedek, tzedek, tirdof”: “Justice, justice, shall you pursue.” That represents the imperative of justice. And to me that’s always pretty inspirational. I have a poster that says tzedek, tzedek, tirdof in my office at work.

This is really a David and Goliath story. Even in the middle of a pandemic, even against the perhaps most powerful company in the United States, controlled by the wealthiest person on the planet, people are still able to stand up and fight for their rights.