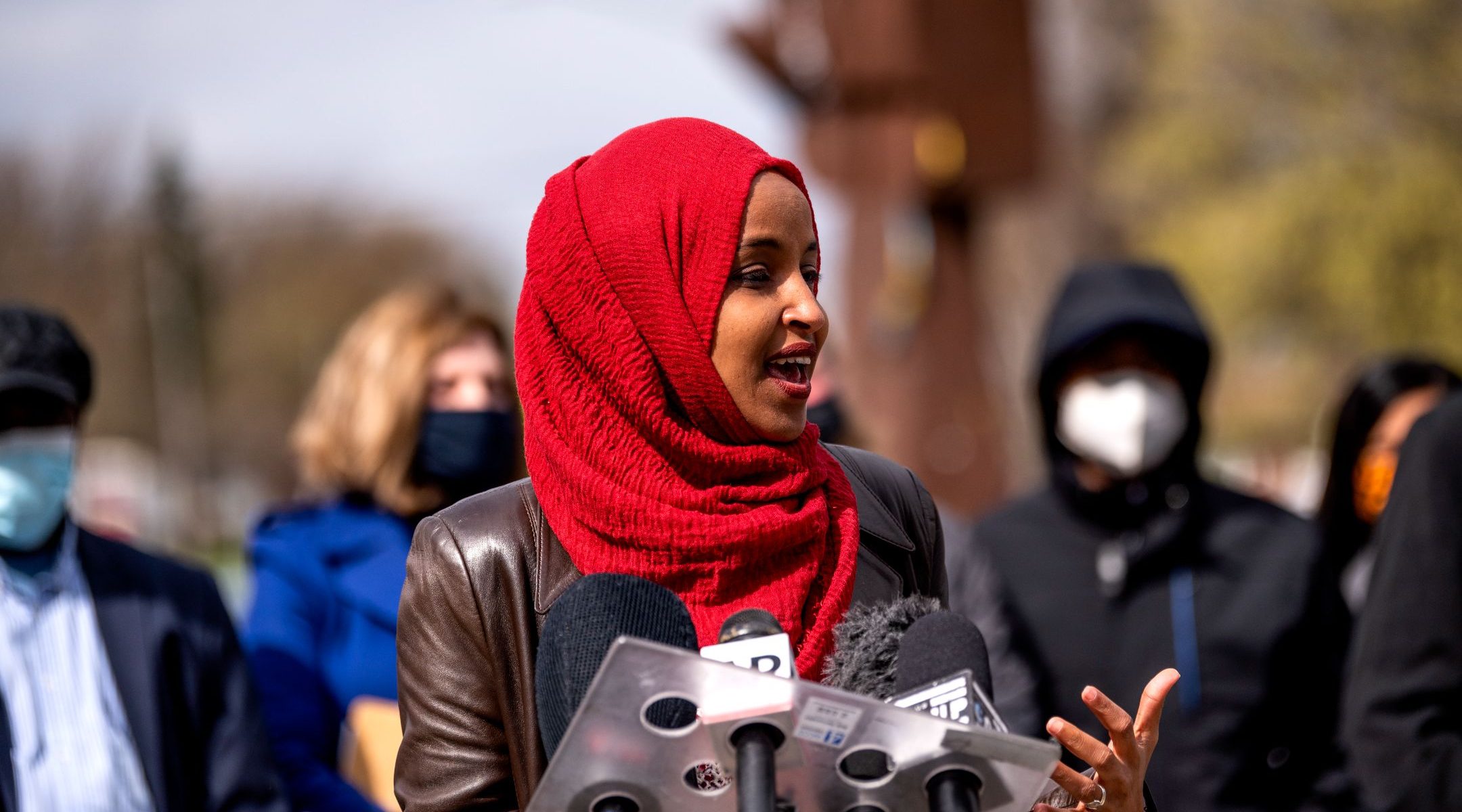 WASHINGTON (JTA) — Jewish Democrats in the U.S. House of Representatives met Wednesday to discuss antisemitism. The 25 members of the unofficial caucus ended up fulminating about a fellow Democrat, Ilhan Omar of Minnesota, for appearing to liken Hamas and the Taliban to Israel and the United States.

It was the second meeting of the Jewish Democrats in recent weeks. The first focused on the Israel-Hamas conflict and the accompanying spike in antisemitic incidents in the United States.

Wednesday’s assembly focused on an Omar tweet from Monday.

“We must have the same level of accountability and justice for all victims of crimes against humanity,” Omar posted. “We have seen unthinkable atrocities committed by the U.S., Hamas, Israel, Afghanistan, and the Taliban.”

A number of lawmakers at the meeting want to name Omar in a statement saying that her claim “discredited” the party, two sources said. Such a statement would be unprecedented since the Gaza conflict: Jewish members have called out statements on Israel by lawmakers on the party’s left, but have yet to name them. (Jewish lawmakers named Omar during a separate controversy in 2019.) Others on the call were hesitant to issue a statement.

There appeared to be unanimous frustration with Omar’s comment, but not about how to address it. Among those pressing to condemn Omar by name were Brad Schneider of Illinois, Brad Sherman of California and Debbie Wasserman Schultz of Florida. Jamie Raskin of Maryland, a leading progressive, appeared to be hesitant, but did not outright oppose a statement, the sources said. No one on the call said they believed the tweet was antisemitic, the sources added.

Critics of Omar within the Jewish Democratic caucus were considering sending their own letter if they were unable to persuade the entire caucus to sign on, a source said.

Others attending included Jerry Nadler of New York, Ted Deutch of Florida, Jan Schakowsky of Illinois, Elissa Slotkin of Michigan and Elaine Luria of Virginia. In 2019, Schakowsky joined Omar on a campaign against antisemitism and Islamophobia.

Republicans have chided Democrats for not singling out purported offenders in their ranks, noting that they have condemned by name one of their own — Rep. Marjorie Taylor Greene of Georgia — for her conspiracy-fueled statements invoking the Holocaust.

Omar’s tweet contained a video of her questioning Secretary of State Antony Blinken in Congress that day about why the Biden administration opposes efforts by the International Criminal Court to probe nationals of certain countries for alleged war crimes.

Omar said she did not believe that Hamas, the Afghanistan government, the Taliban and Israel met the threshold of a military justice system sufficient to independently pursue justice.

“I haven’t seen in evidence in either case,” the Afghan and the Gaza conflicts, “that domestic courts both can and will prosecute war crimes and crimes against humanity,” she said. “Where do we think victims are supposed to go for justice, and what justice mechanisms do you support?”

Jeremy Slevin, a spokesman for Omar, said her question focused on thanking the Biden administration for withdrawing sanctions on the ICC for considering prosecutions of U.S. and Israeli officials, and asking what mechanism victims of alleged war crimes could access outside the ICC.

“Rep. Omar thanked Secretary of State Blinken for the administration’s decision to repeal the sanctions and asked about justice mechanisms for victims of war crimes outside the criminal court,” he told the Jewish Telegraphic Agency. “As usual, the far right is ginning up hate against Rep. Omar for a technical question about an ongoing investigation. It is the congresswoman’s role as a member of Congress conducting federal oversight to follow the facts, ask questions of the administration and work to make sure the public understands our government shouldn’t deny any person from seeking justice.”

“Beyond shocking. Beyond reprehensible,” David Harris, the American Jewish Committee CEO, said on Twitter. “Will members of her own party speak up?” Schneider was involved in AJC before entering Congress.

Sherman, who also has a pro-Israel background, posted: “It’s not news that Ilhan Omar would make outrageous and clearly false statements about America and Israel. What’s newsworthy is that she admits Hamas is guilty of ‘unspeakable atrocities. It’s time for all of Israel’s detractors to condemn Hamas. And it’s time for all those of good will to reject any moral equivalency between the U.S. and Israel on one hand, and Hamas and the Taliban on the other.”

And this tweet from Gilad Erdan, the Israeli ambassador to Washington and the United Nations: “How can a member of Congress compare Israel & the US — two vibrant democracies with robust legal systems & militaries that strive to avoid civilian casualties — with jihadi terrorists who purposely murder civilians?”