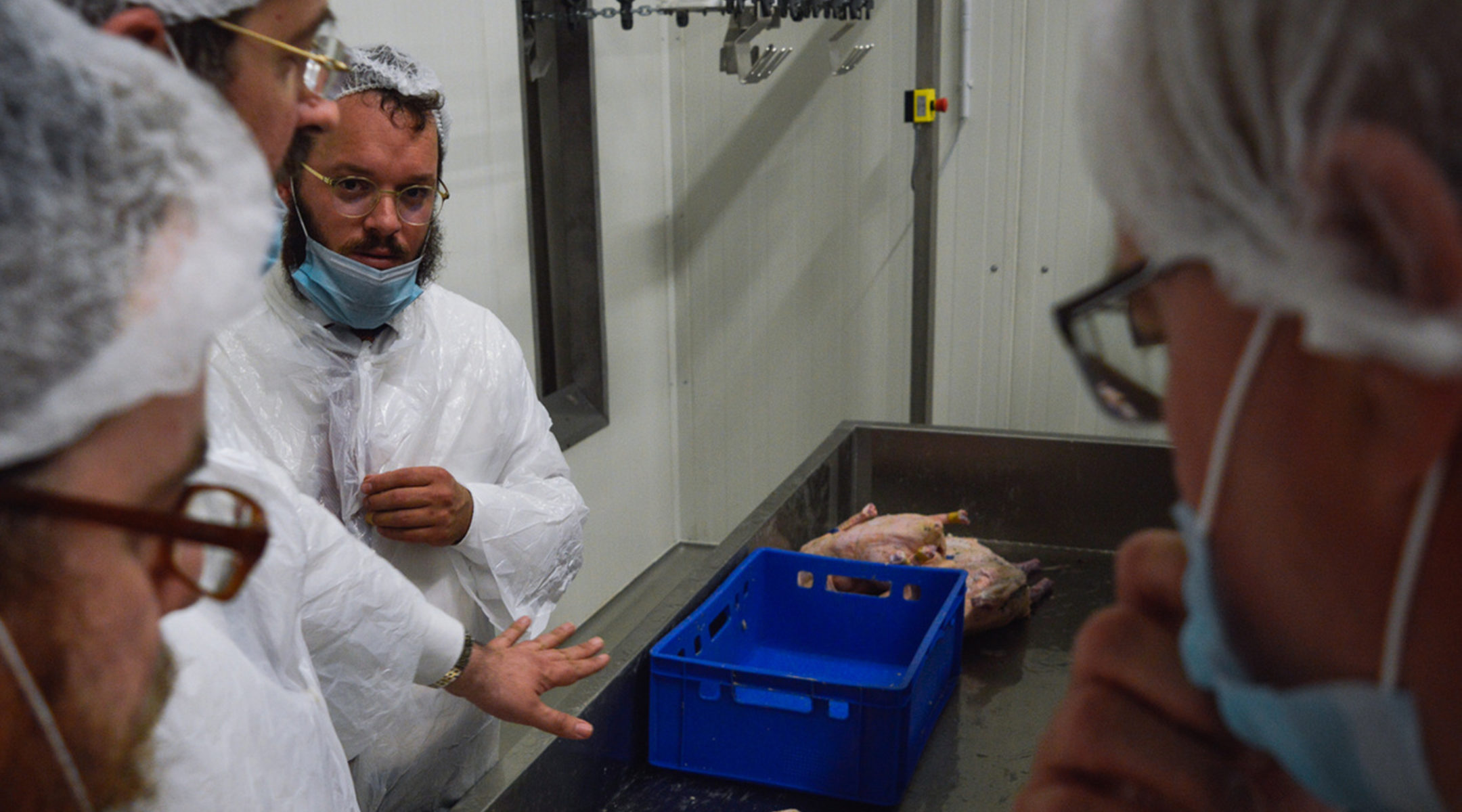 AMSTERDAM (JTA) — Jewish leaders in Europe say the European Union is not only banning some methods of kosher and halal slaughter, but telling Jews and Muslims how to practice their religions.

That’s according to many who have read a recent ruling by the EU’s highest court. It upholds bans in Belgium on producing kosher and halal meat, outlawing a practice whereby livestock is slaughtered without first being stunned electrically into unconsciousness.

Jewish and Muslims authorities forego stunning under similar religious laws that require animals be conscious when they are killed for meat. The court and animal rights activists say that’s cruel.

But the decision on Dec. 17 by the Court of the European Union goes a step further: Remarkably, the 11,000-word document suggests that Jews and Muslims should and could find a way to allow animals to be stunned using electricity.

This aspect of the ruling is already rekindling internal communal debates in Muslim and Jewish communities amid allegations that the court is eroding the separation of church and state.

“That part of it is astonishing,” said Shimon Cohen, campaign director for Shechita UK, a London-based organization that lobbies against attempts to ban shechita, or kosher slaughter. A secular court does not have “the authority to tell people if they can practice elements of their faith. I may disagree with some of the restrictions, but not with the mandate. But a secular court has no right to tell me how to practice. That’s gross overreaching.”

Pinchas Goldschmidt, the president of the European Conference of Rabbis, told the Jewish Telegraphic Agency that for the court “to seek to define shechita is absurd.”

Goldschmidt rejected the court’s apparent interpretation of electric stunning as compatible with Judaism. Meat from animals that had been stunned by any means, including electricity, prior to their slaughter cannot be considered kosher, he said.

The bans in Belgium are part of a struggle across Europe between animal welfare activists and Muslim and Jewish community representatives over the halal and kosher slaughter methods.

In recent years, anti-immigration activists and politicians have joined the debate in an apparent push to minimize the footprint of Muslim presence in Europe, and in some cases also the Jewish one. A similar fight is unfolding around nonmedical circumcision of boys, or milah, which some children’s rights activists say is cruel.

The ruling on slaughter, rejecting a petition filed by Muslim and Jewish groups in Belgium, suggests that because “electronarcosis” is itself nonlethal, religious authorities should be able to adapt it within their religious rituals.

Additionally, the ruling said that since the ban is limited to parts of Belgium, Jews and Muslims may still obtain a supply of kosher and halal meat, mitigating the encroachment on their freedom of worship.

Cohen objects to these arguments. The science on what causes an animal to suffer less — an electric shock or a sharp, swift slash of a knife — is far from settled, Cohen argued, and subject to religious interpretations that are beyond the court’s purview. As for the supply argument, he noted that kosher meat shortages are already common in Europe today.

The court appeared to rely on the authority of a Muslim veterinarian who testified before a Belgian parliamentary committee on the environment. Jamal Zahri, a representative of the Executive of Belgian Muslims, seemed to endorse electric stunning.

“We’re not closed, it’s not that we don’t want it,” Zahri said about electric stunning. “We’re only looking to preserve two Muslim requirements: That the animal be alive [when its neck is cut] and that it bleeds out.” He added: “This is my position as a doctor representing the Executive of Belgian Muslims.”

Zahri’s position was based on some religious Muslim edicts that permit electronarcosis if no other choice is available. Judaism has no such edicts, Goldschmidt said.

Zahri also favored a procedure in which an animal is stunned very shortly after its neck is cut, limiting convulsions and, according to some, suffering. Some Jewish communities and rabbis have accepted this method, as have some Muslim ones. But it is not widely accepted in either religion.

Nonetheless, during the parliamentary debate, where no Jewish community representatives were present, Zahri said that both post-cut stunning and electronarcosis are acceptable compromises for Belgian Muslims.

His statements triggered an uproar in his community. The Executive of Belgian Muslims disavowed Zahri, publishing a statement that calls his position “merely his personal opinion” and representing a minority view.

In addition to wading into religious areas in which it has no business, Cohen said, the court “lumped Muslim and Jewish customs together.” The two religions have distinct methods for ritual slaughter

“The court’s ruling makes as much sense as moving Shabbat to Sunday because Christians are fine with it,” Cohen said.

Ironically or not, the court’s ruling is being cited by Jewish advocates of post-cut stunning. They say the method satisfies animal welfare considerations and would modernize halacha, Jewish law, without sacrificing its core values.

“Post-cut stunning happens after all the demands of kosher shechita have been met,” one of those advocates, Lilianne Vana, an associate professor specializing in Jewish studies at the Université libre de Bruxelles in Brussels, said. “It satisfies all the parties’ requirements. And it’s already happening.”

Across the European Union, kosher meat has a negligible share of the market, accounting for less than a percent of the 2.5 million cattle slaughtered in the United Kingdom annually, Cohen said. The far larger halal meat industry accounted in 2012 for 6% of the total market, according to a European Parliament document.

The post-cut stunning technique was once used in some abattoirs in Austria, that country’s previous chief rabbi, Arie Folger, told JTA, but is no longer taking place. Austria has no kosher slaughter of bovines today.

Europe currently has a hodgepodge of laws about ritual slaughter. In the Netherlands, an arrangement allows a 40-second delay between cutting an animal’s neck and applying the electric charge. That was the compromise that allowed for the reinstatement of ritual slaughter after it was temporarily banned in 2011.

In 2011, the Netherlands briefly joined several EU countries where ritual slaughter is illegal, including Denmark, Sweden, Finland, Estonia and Slovenia. The Dutch Senate reversed the ban in 2012, citing freedom of worship. Poland also outlawed the practice in 2013 but has since scaled back the ban to include only meat for export.

The ruling by the EU court, which is based in Luxembourg, “isn’t helping the fight to keep shechita legal,” Cohen said, adding however that so far his group isn’t losing the fight.

Kosher slaughter in Europe of cattle and sheep is done by shochtim, or kosher slaughterers, in regular slaughterhouses. Jewish communities and organizations in Europe own no abattoirs for larger animals and only a handful of poultry factories, Cohen said.

To Vana, the ruling highlights questions on how Orthodox Judaism can adapt, she said.

“Sadly, Jewish communal leaders have become entrenched in their opposition” even when halacha would allow changes, she told the La Libre Belgique newspaper.

“On a continent where hunting sports are cherished traditions and the fur trade thrives, this debate is not about animal welfare,” he said. Animal welfare arguments on shechita and children’s rights debates on milah “are cloaking a broader ideological clash between secular judges and governments who regard religion essentially as something silly, and people of all faiths who must stand together and insist on their freedoms,” he told JTA.

Despite repeated statements by officials about Europe not being Europe without Jews, Margolin said “the practical implication of the ruling and inaction about it by EU leaders tells Jews clearly that they have no place on the continent.”