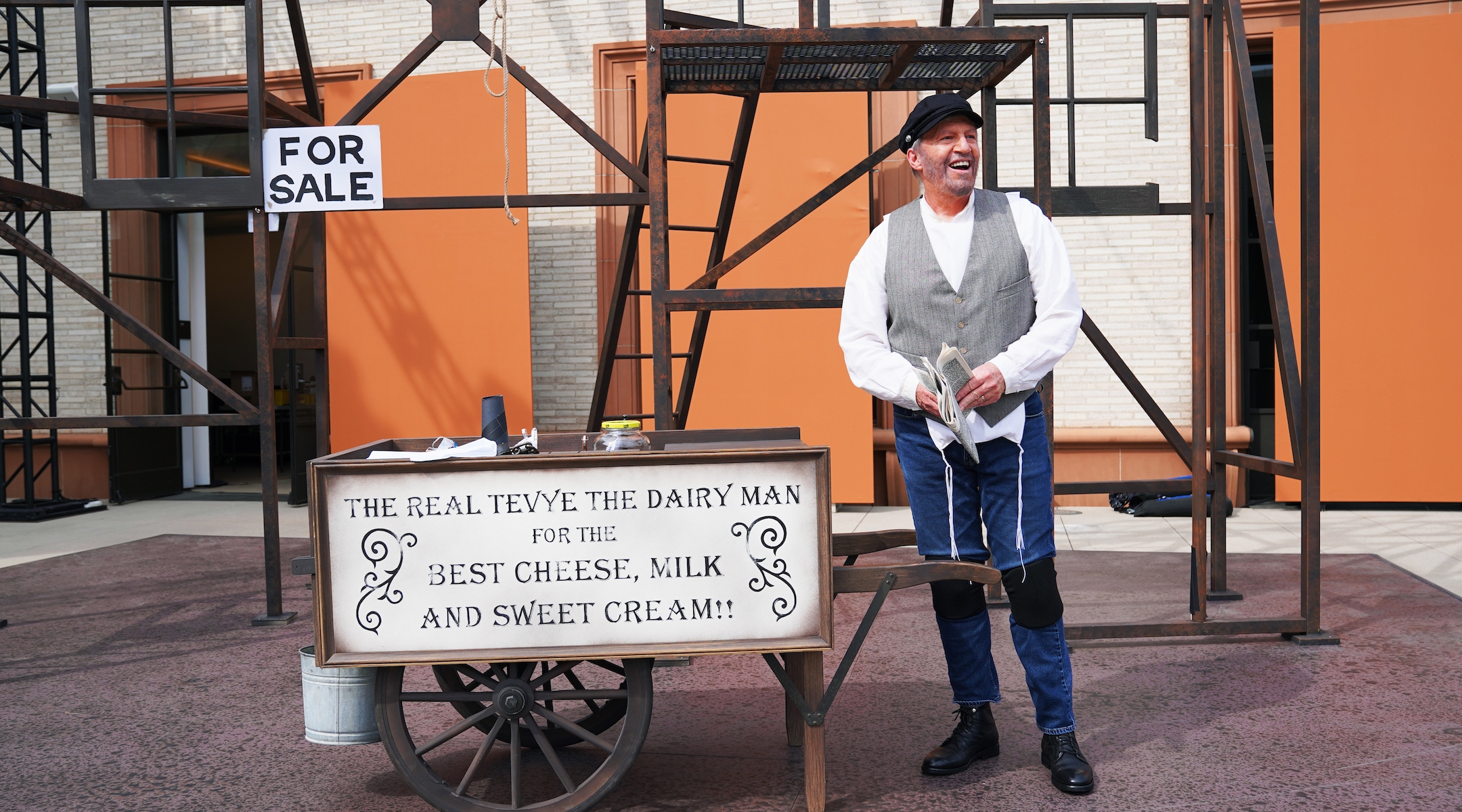 Tom Dugan in a rehearsal for "Tevye in New York." (Courtesy of The Wallis)
Advertisement

LOS ANGELES (JTA) — The last time we saw Tevye the Milkman on Broadway in “Fiddler on the Roof” was in 2016, escaping Anatevka as a pogrom swept the shtetl.

Now, almost five years later, he is resurfacing in a one-man play titled “Tevye in New York,” opening in its world premiere — in Beverly Hills, of all places.

It’s the latest radical reimagining of the beloved Sholem Aleichem character, who also saw his “Fiddler” story performed onstage in Yiddish for the first time in Joel Grey’s recent off-Broadway production and was the focus of a 2019 documentary. But this time the milkman goes beyond the shtetl to experience life as an American immigrant.

Tevye has the stage all to himself in the Wallis Theater production, undistracted by a wife or five love-torn daughters. The play, written by and starring Tom Dugan (who also co-directs with Michael Vale), opens Wednesday.

The stage scene is the corner of Orchard and Delancey on Manhattan’s Lower East Side, the neighborhood where Tevye and his family settle after fleeing Russia in 1909.

The date is July 4, 1914. Tevye, now a proud American citizen and dressed like the small businessman he has become, is waiting for the soon-to-start Independence Day parade led by President Woodrow Wilson himself.

While selling pickles from a barrel and hawking ice cream bars, Tevye entertains the neighborhood merchants and residents with the story of his life and explains the difference between living in Russia and New York.

Also, while Jewish life in Russia was marked by constant bad luck, in America “you make your own luck.” It’s all quite reminiscent of Seth Rogen’s recent shtetl-to-Lower East Side comedy “An American Pickle.”

Tevye now runs a small grocery, while his daughters work in the garment district and were witness to the disastrous Triangle Shirtwaist Factory fire in 1911. He goes into partnership with one of his daughter’s suitors from the old country, Lazar the Butcher.

Playing a profoundly Jewish character like Tevye — for which he will follow in the footsteps of such notable predecessors as Zero Mostel, Chaim Topol, Theodore Bikel, Leonard Nimoy  and Maurice Schwartz (in a Yiddish pre-musical film from 1939) — is typical for the 60-year-old Dugan.  The versatile actor, writer and director has written, directed and performed in some 50 films and television shows over his 40-year career. One of Dugan’s most successful stage performances was as the famed Nazi hunter Simon Wiesenthal in another one-man show in 2014, for which he received an award for best solo performance by the L.A. Drama Critics Circle.

While Dugan has portrayed these acclaimed Jewish figures, he is of Irish descent.

“My wife Amy is Jewish, our children are Jewish and we are all members of Temple Judea in Tarzana,” a Los Angeles suburb, Dugan told the Jewish Telegraphic Agency. “Also, my father served as an American infantryman in Europe during World War II and I asked him a lot of questions about what happened there.”

Or perhaps his future course was set in 1976, when his high school in Rahway, New Jersey, put on “Fiddler on the Roof” and Dugan was cast as Tevye. Dugan says that intro to the character inspired him to revisit the part in 2021.

Additionally, Dugan hopes that Tevye’s immigrant story can be useful for the nation’s current debate around immigration.

“I thought audiences might like to be reminded that when we speak of the story of American immigrants, we are speaking about our own relatives and, by extension, all of us,” he said.

To envision his hero’s life in New York, Dugan turned for inspiration to another Sholem Aleichem story: “Motl The Cantor’s Son,” which also follows a family of Jewish immigrants from their Russian shtetl to the Lower East Side.

“That got my imagination going for Tevye,” Dugan said.

He’s made every effort to resurrect “the original Tevye” for audiences — Topol’s version has always been the “definitive” one to him — so they would be willing to follow the character “in a very new direction.”

“Tevye in New York” will break ground by becoming the first play at the Wallis Annenberg Center for the Performing Arts at its new pop-up outdoor terrace.

Paul Crewes, artistic director at the Wallis, said the outdoor performing space has tiered seating for 100 “socially distant” audience members each night, in addition to space for lighting and sound equipment.

As a bonus, the audience will in effect serve as the merchants and citizenry listening to Tevye on the Lower East Side.

The London-born Crewes says the last 15 months have been extremely difficult for theater companies worldwide, but he hopes that by next year they will rebuild their audiences. In any case, he says, the Wallis would follow the tradition of England’s Old Globe Theatre in Stratford in staging outdoor performances of Shakespeare’s plays.

There are no definite plans at this point to bring the play to New York or other American or European venues, or make it into a movie. Much will depend on the critical and commercial reception during its initial run. Crewes says ticket sales are very encouraging so far.