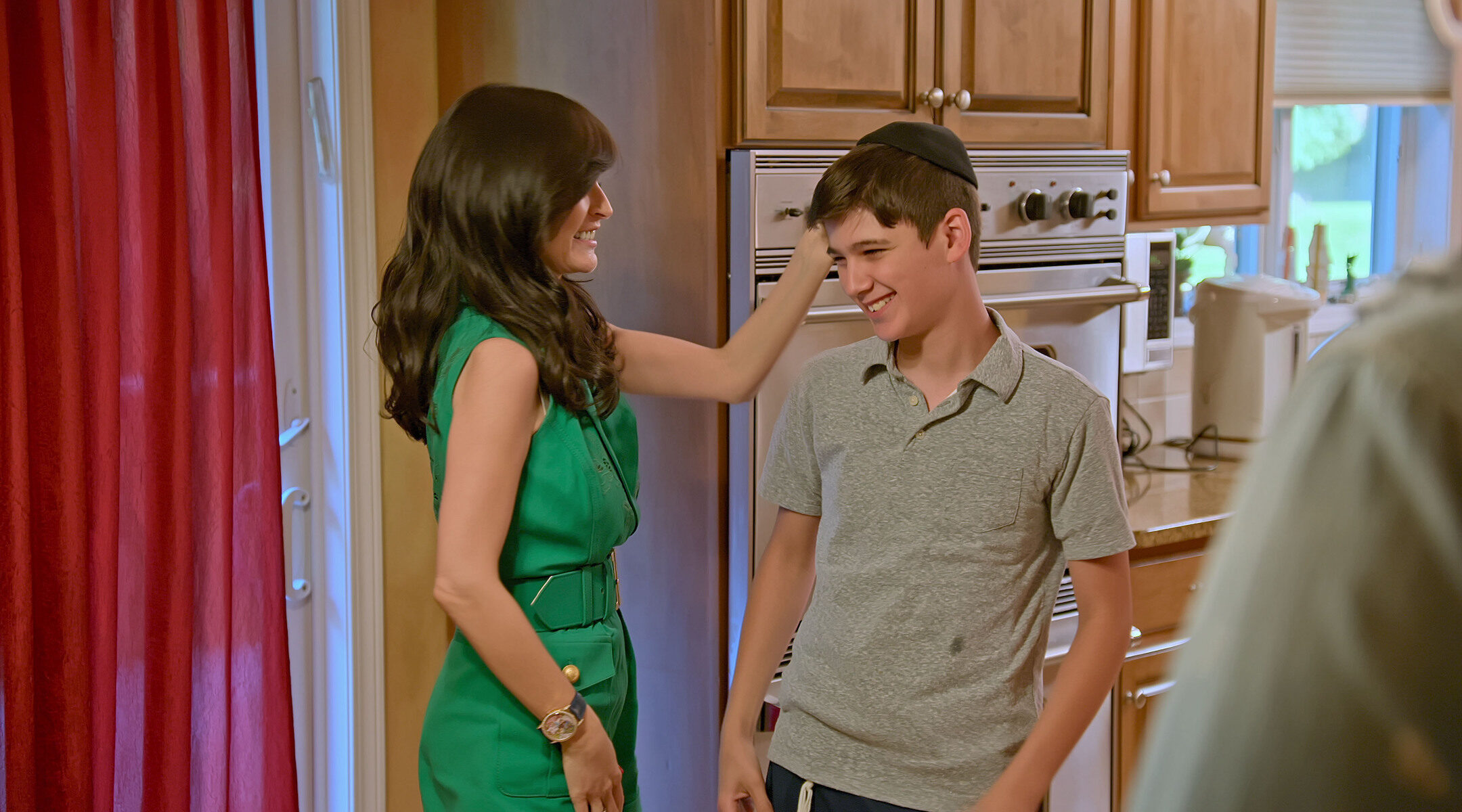 Julia Haart and her 14-year-old son Aron, who is still religious, in a scene from "My Unorthodox Life." (Courtesy of Netflix)
Advertisement

(JTA) — Julia Haart doesn’t want her son Aron to stop being Orthodox. On “My Unorthodox Life,” the new Netflix reality show about her family, Haart is shown encouraging the 14-year-old to give up the commitment he made at summer camp not to talk to girls at his new school. He says engaging with girls — or sports, for that matter — would distract him from learning Torah. She tells him that life is bigger than the Torah.

It’s among the more emotionally charged scenes on the show, which premiered this week on Netflix. It’s also evidence that Haart’s critics are citing to show that she wants to force the people in her life to abandon Orthodoxy the way she did before becoming a fashion industry CEO, all in her 40s.

We included Haart’s defense against that criticism in our first story about “My Unorthodox Life,” what the show depicts and the feedback it’s getting. But in her interview with the Jewish Telegraphic Agency, she said much more, including that she does not pressure those close to her to change their ways.

“Do I give them a hard time about being religious? No, the only person I ever gave a hard time to was Aron,” Haart said. “All I said is, talk to girls, get an education, go to college. It’s just about opening the outside world to yourself, and realizing that there are wonderful people in every nationality, in every ethnicity, in every religion.”

Here are some more highlights from Haart’s JTA interview about her religious Jewish upbringing, why she decided to tell her story now and the impact she hopes to have on the community she left.

JTA: How did you decide to tell your story so publicly? And why now?

Haart: When I first left the community, I didn’t tell a soul. I started telling my close friends after I became creative director of La Perla [three years later]. Until that moment, no one knew me. I hadn’t ever done anything, and I wanted to first get known for what I was capable of — to show the world what I had inside of me.

And then, to go from there to sharing it with the planet, that was a very difficult decision for me because it is very personal and private. And we live in a world with social media and, you know, people get attacked. It’s not an easy decision to make, but I chose to do it.

I have met so many thousands of women from different walks of life, different situations, different cultures and nationalities. And what I have seen is that it’s a story that hopefully — that’s my prayer — may help other women. There are so many women in different situations, different countries, religions … it doesn’t matter what the impediment is to them achieving their goals, but there are so many women suffering. And so I felt that it [my story] is such an unusual story that perhaps it may inspire someone, it may give someone the courage to change their life.

Can you elaborate about how you left the community? Most people who leave do not end up where you are.

Thank you for pointing that out, because that is the truth — most people who leave do not have that same experience. And it’s not because they’re not brilliant or hardworking, or they don’t want to, you know, change their life and become part of the outside world, it’s because they’re not equipped to handle it. And that’s the frightening part.

When it comes out I hope you read [my memoir] “Brazen.” Believe it or not, when I handed it in when I finished writing, it was 1,700 pages because it’s such a complex story and there is no short way of telling it. Luckily I have great editors, we got it down to something under 500 pages, but the reality is that it is a crazy story. Like, the first woman to walk into my showroom was the head buyer of shoes for Harrods and I met her at a fashion party.

Who in particular do you want to watch “My Unorthodox Life”?

I hope everyone watches the show. For the people in my community, I think if they actually watch the entire show and not just the first episode, where I explain why I left. …  The next eight episodes show that we [in the family] all get along, that there’s beautiful things in religion and that I have nothing against Judaism.

My children are still religious. Do I give them a hard time about being religious? No, the only person I ever gave a hard time to was Aron. All I said is, talk to girls, get an education, go to college —  it’s just about opening the outside world to yourself, and realizing that there are wonderful people in every nationality, in every ethnicity, in every religion.

One of the critiques we’re hearing is that you only have negative things to say about your life before leaving Orthodoxy. How would you respond to that?

I learned many beautiful things in my community. I mean, during Purim, you don’t go and ask for gifts, you give gifts. There’s so much giving and generosity and gratitude and appreciation. I talk about it in this show, I talk about it in every interview. I love being a Jew, I love the people in my community. I hate fundamentalism, and there are aspects in our world that are fundamentalist, and they need to go, and they can go.

In an ideal world, what changes would you want your show to induce?