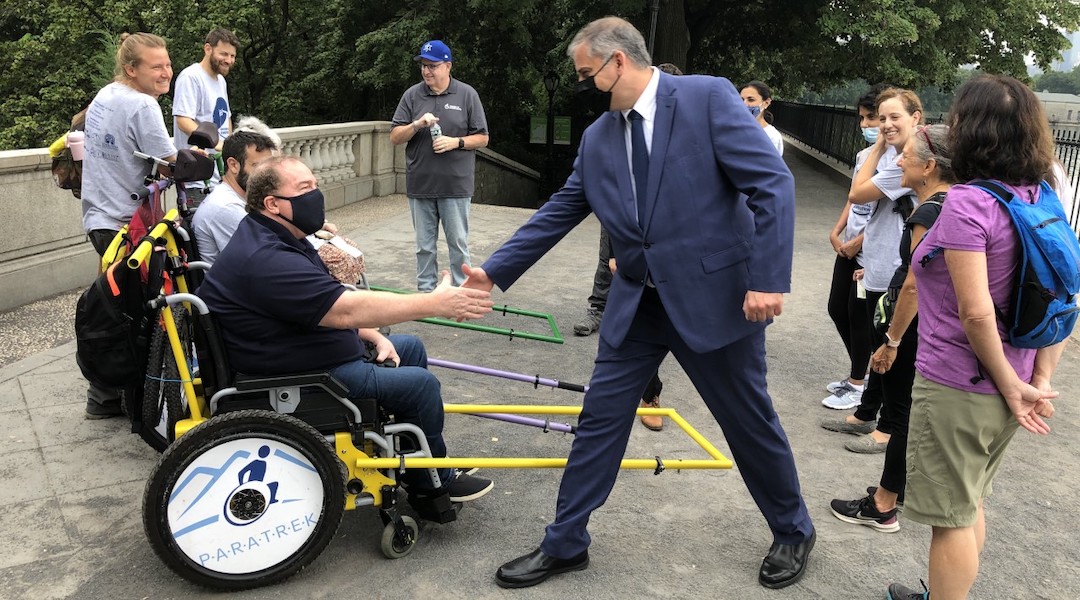 Israel Nitzan, Consul General of Israel in New York, greets a team from Friends of Access Israel during their trek in Central Park to demonstrate the need for improved access for people with disabilities, Aug. 4, 2021. (FAISR)
Advertisement

Good morning, New York. Starting today, due to the surge of COVID cases with the Delta variant, we are going to provide regular updates on how local synagogues and other institutions are adapting, especially in their High Holidays planning. Let us know how your congregation is doing: Send an email to editor@jewishweek.org.

Mayor de Blasio will deliver remarks at the renaming of a Coney Island hospital building in honor of Justice Ruth Bader Ginsburg, today at 12:30 p.m.

Matt Nosanchuk, president and co-founder of New York Jewish Agenda, testified against a redistricting plan that he says would dilute Jewish voting clout on the West Side of Manhattan.

A Gilded Era mansion in midtown that used to house two kosher restaurants — Great American Health Bar and Café Classico — is set to be demolished.

An Israeli organization that promotes access for people with disabilities is in the midst of a hiking expedition in Central Park and Westchester County.

Passengers on an El Al  flight from New York to Tel Aviv today will be tested for the coronavirus on the plane itself or before boarding.

Nelson Marans, a retired chemist, was the master of perhaps a dying art: writing letters to the editor. Over his 97 years, the long-time resident of Silver Spring, Md., wrote perhaps thousands of letters to the Washington Post, the Washington Jewish Week, the New York Jewish Week and other papers. He died July 17 in New York City, where he and his wife moved in 2016 to be closer to their children.

Gov. Cuomo should resign, after a report “found at least 11 credible accusations of sexual harassment against the governor,” writes David Suissa, editor and publisher of the Jewish Journal of Greater Los Angeles. “At a time when confidence in politicians is already near rock bottom, he’s sending a message that personal political survival comes before everything,” writes Suissa.

Commonpoint Queens hosts a virtual conversation with Donald Nobles, an Air Force veteran, retired teacher and activist. Nobles will speak about his career, his personal experiences with racism, and his thoughts on how we can all play a part in making our own society a more welcoming place for people of all backgrounds. The event will be broadcast over Facebook live. 6:00 pm.

Photo, top: Israel Nitzan, Consul General of Israel in New York, greets a team from Friends of Access Israel during their trek in Central Park to demonstrate the need for improved access for people with disabilities, Aug. 4, 2021. (Howard Blas)