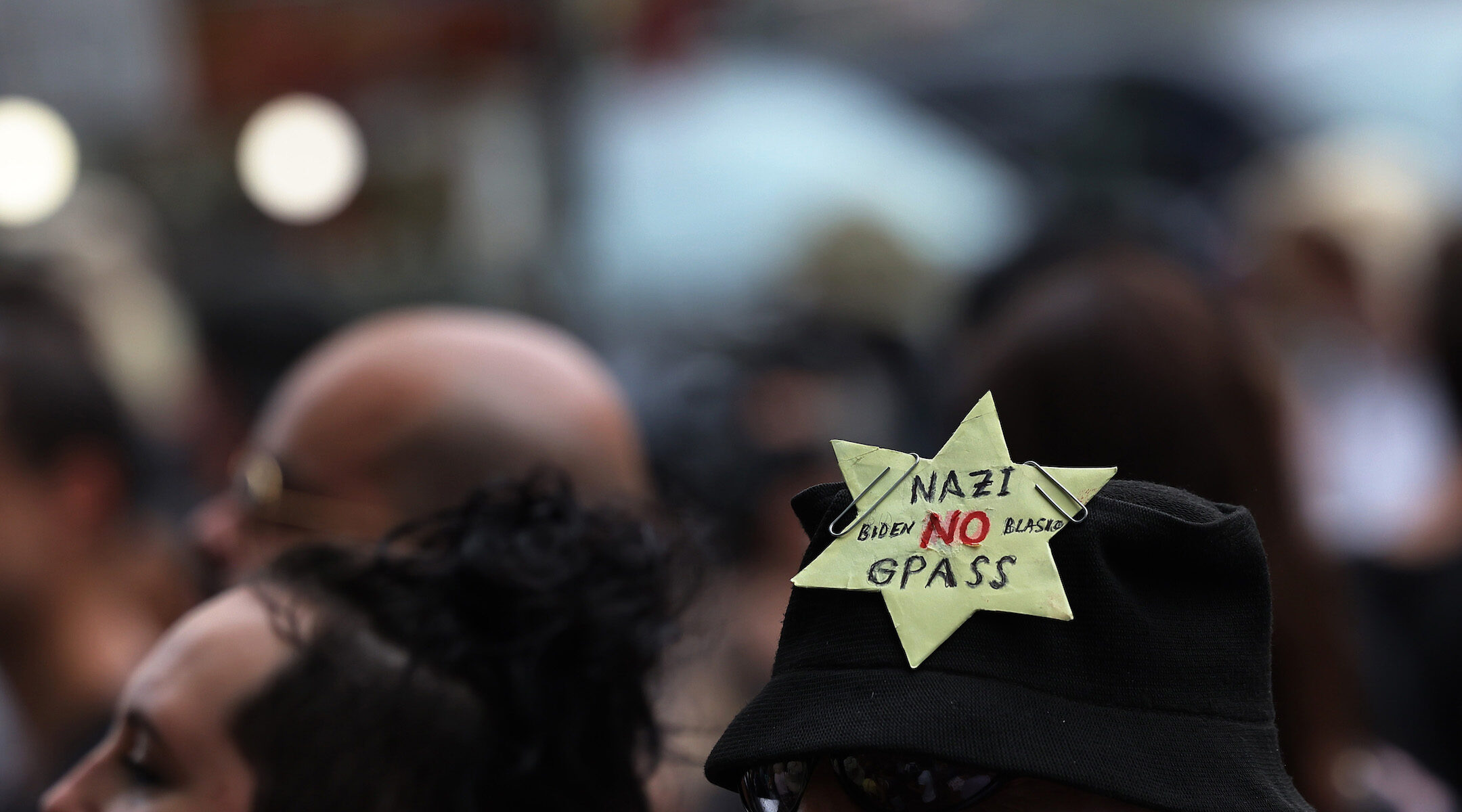 A protester compares local vaccine mandates to the Nazis’ treatment of Jews, during a protest at New York’s City Hall in lower Manhattan, Aug. 9, 2021. The Anti-Defamation League and other groups have condemned such comparisons. (Michael M. Santiago/Getty Images)
Advertisement

Good morning, New York. We’re finding it hard not to freak out over a UN report warning climate change is happening much faster than expected and showing how the window for meaningful action is rapidly closing. The Jewish environmental group Dayenu offered these words of encouragement: “In the face of such news, it’s easy to despair. But a powerful antidote to despair is action. The month of Elul is a time when we call ourselves and our communities to account. We take stock and vow to do better.”

Feminist lawyer Roberta Kaplan is quitting “Time’s Up,” the group that has championed victims of sexual harassment, because of her role in advising accused harasser Gov. Andrew Cuomo.

The NYC neighborhoods with the most vaccine holdouts are mostly Black and Orthodox Jewish communities in the outer boroughs, Bloomberg reports.

The Florida shock radio host and former Newsmax anchor who died of COVID-19 after spending months telling his followers not to get the vaccine was a Jewish man from Queens.

Sue Bird, who played high school ball in her hometown of Syosset, Long Island, won her fifth gold medal as part of the U.S. women’s basketball team at the Tokyo Olympics.

Barbra Streisand has kept busy throughout the pandemic: Her most recent album,“Release Me 2,” dropped on Friday, featuring rare and previously unreleased songs.

Marlene Meyerson JCC Manhattan, 334 Amsterdam Ave., presents an in-person rooftop screening of “CODA,” a new film about the sole hearing member of a deaf family whose life revolves around acting as interpreter for her parents (Marlee Matlin and Troy Kotsur). Health and safety details can be found here; order tickets here. 8:00 pm.

Photo, top: A protester compares local vaccine mandates to the Nazis’ treatment of Jews, during a demonstration at New York’s City Hall in lower Manhattan, Aug. 9, 2021. The Anti-Defamation League and other groups have condemned such comparisons. (Michael M. Santiago/Getty Images)