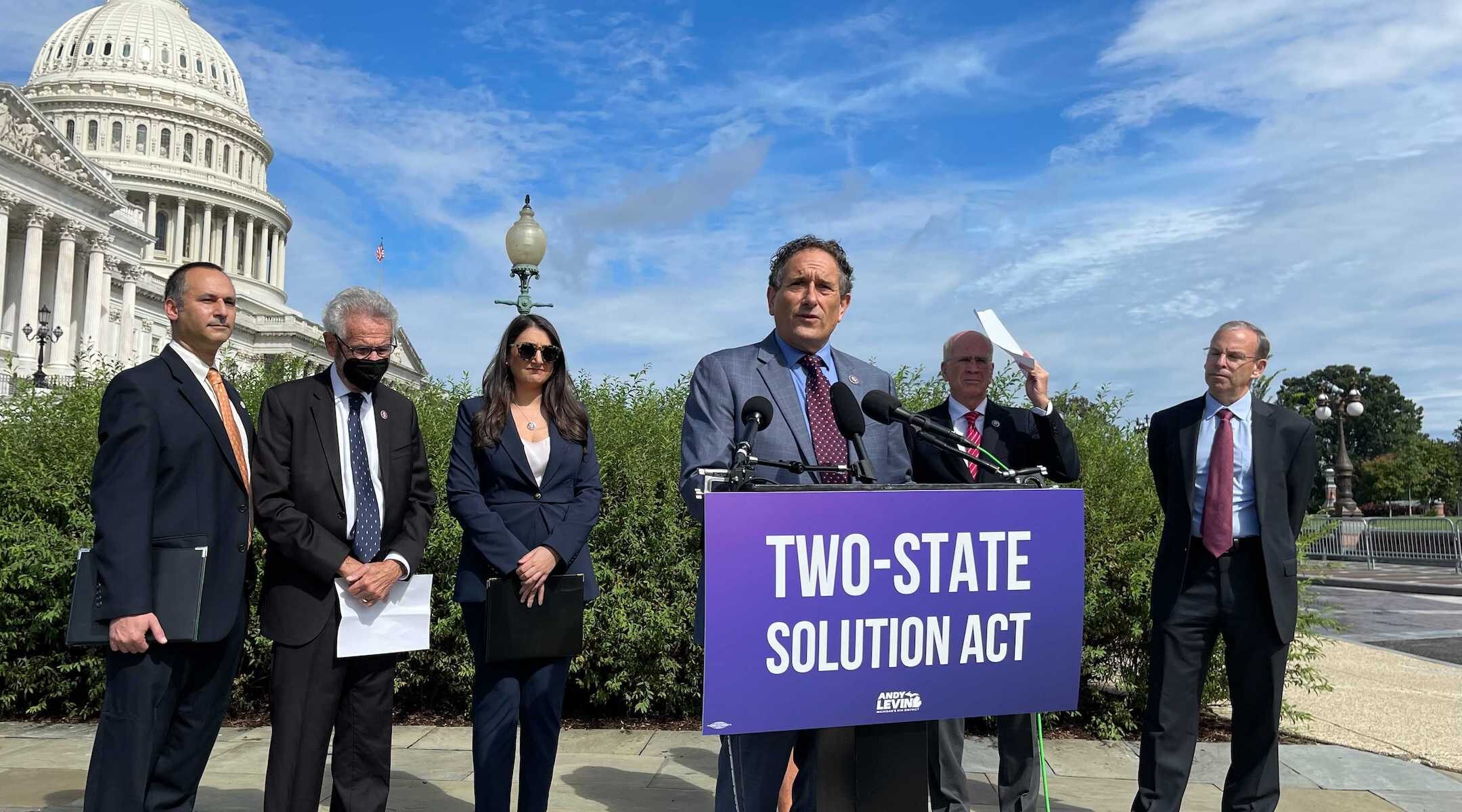 WASHINGTON (JTA) — There were two groups of Jewish Democrats working Capitol Hill this week, each leveraging their Jewishness to advance what each believed to be a critical remedy after Israel’s conflict with Hamas in May.

Each group was backed by a lobby that claims to speak on behalf of the Jewish community. And each hoped to capture headlines Thursday with major legislation.

The competing appeals for attention revealed a growing divide not just among Democrats, but among the Jews in the party’s ranks. Once Israel could count on Democrats, and especially Jewish Democrats in Congress, to deliver on requisitions for defense assistance with few questions asked.

That’s no longer the case, as this week’s fight among Democrats over whether to include $1 billion in funding to replenish Israel’s Iron Dome missile defense system in a spending bill made clear.

In a Thursday press conference, Levin announced he was leading a group of lawmakers who wanted to enshrine as U.S. law the two-state solution as the preferred outcome to the Israeli Palestinian conflict. That in itself would likely garner broad support among Jewish Democrats, but Levin’s bill also mandates strict oversight of how Israel spends defense assistance, and also bans spending on any project that entrenches Israel’s occupation of the West Bank.

Manning, meanwhile, spearheaded the bill approved Thursday that would deliver $1 billion in new money for the Iron Dome, per a request by Israel’s government. Progressives led by New York Rep. Alexandria Ocasio-Cortez and “the Squad” forced Democrats to remove the same amount of money from a stopgap emergency government funding bill earlier in the week.

The standalone bill was approved overwhelmingly Thursday, but the debate laid bare the tensions that some progressives have unleashed among Democrats.

“We can not only talk about Israelis needs for safety while Palestinians are living under apartheid,” said Rep. Rashida Tlaib, D-Mich., a Palestinian American who was one of a handful of votes against the funding. “We should also be talking about Palestinian needs for protection from Israeli attacks.”

Rep. Ted Deutch, D-Fla, who is Jewish and who chairs the House Middle East subcommittee, discarded a speech that emphasized the defensive nature of Iron Dome and instead turned his rhetoric on Tlaib.

“I cannot allow one of my colleagues to stand on the floor of the House of Representatives and label the Jewish democratic state of Israel an apartheid state,” he said. “When there’s no place on the map for one Jewish state, that’s antisemitism.” Accusing a caucus colleague of antisemitism is extraordinary.

Levin said in an interview with the Jewish Telegraphic Agency that the vast majority of the American Jewish community backs his approach, which is to advocate for aid for Israel — but with rigid oversight to make sure the money does not inhibit the two-state outcome.

Levin was referring to a Jewish Electoral Institute poll in July, taken after the Gaza conflict, in which 58% of Jewish voters said it would be appropriate to restrict aid to Israel so it could not spend U.S. money on settlements.

Manning, a first-term member of Congress, was previously the chairwoman of the Jewish Federations of North America, and has for years been deeply involved in Jewish philanthropy. Though she did not cast her appeal for Iron Dome funding in Jewish terms, the team of Democratic colleagues she assembled to press the House to advance the bill was entirely Jewish.

It included Reps. Ted Deutch and Debbie Wasserman Schultz of Florida, Brad Schneider of Illinois, Elaine Luria of Virginia, Dean Phillips of Minnesota, and Josh Gottheimer of New Jersey. Manning’s statement announcing the standalone bill made it clear that, for this group of Jewish Democrats, funding the Iron Dome was sacrosanct.

“The Iron Dome is a critically important defense system used by Israel, one of our closest allies, to save civilian lives from terrorist attacks,” she said.

Levin did not assemble an exclusively Jewish group, but six of the 14 members signing on as co-sponsors are Jewish, including Steve Cohen of Tennessee, Sara Jacobs and Alan Lowenthal of California, Jan Schakowsky of Illinois, and John Yarmuth of Kentucky. All of his fellow lawmakers present at the press conference — Jacobs, Lowenthal, Schakowsky and Peter Welch, D-Vt. — told JTA they support the Iron Dome funding.

The split also was reflected in who was backing each initiative: lobbying for Manning’s bill was done by the American Israel Public Affairs Committee, the country’s largest pro-Israel powerhouse that is historically centrist and center-right. Levin rolled out his bill at the press conference with J Street, the liberal Jewish Middle East policy group that in recent years has endorsed some restrictions on U.S. assistance to Israel.

At the press conference, Schakowsky, the party’s chief deputy whip, said she the Jewish community was not immune to the cries for social justice that have emerged in recent years.

“I’ve been in Congress now for 22 years, and I have actually seen the sea change in attitudes toward creating peace in the region,” she said. “There is a national movement for justice for all in our country, in many different ways, and I think that now, certainly, the choice of the majority of American Jews has come out: We want security for the State of Israel and we want to see a Jewish democratic state that has become impossible on the face of the occupation, and the justice for Palestinians has to be part of what we are asking for.”

In his interview with JTA, Levin said the bill was in line with the teachings he grew up with as a Reconstructionist Jew. He is one of only two members of Congress to have been a president of a synagogue; the other is Sen. Jacky Rosen, D-Nev., with whom he has said he has bonded over the experience.

“The mitzvah that is repeated more than any other in the Torah, 36 times,” is to protect the stranger, he said. “I submit that if you’re really a person of faith, you have to think, well, the Torah just isn’t talking about any old stranger, really. We probably need to think of, who [are] the hardest strangers, who is the difficult stranger to love as ourselves and to come to break bread with and to support and love. I think the question answers itself for the Jewish people: The hardest stranger is the Palestinian people.”