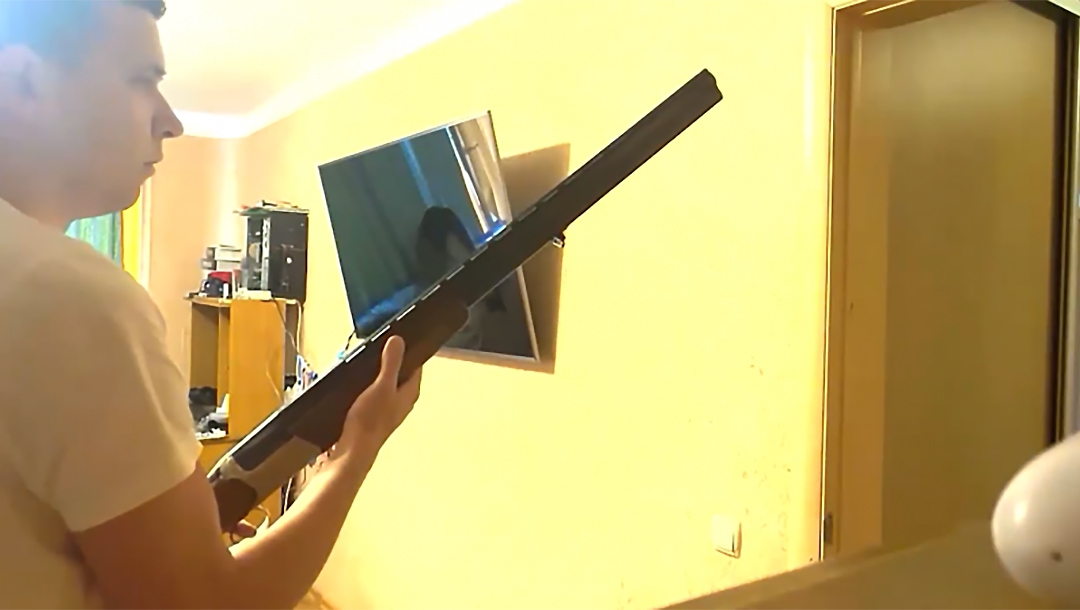 Andrei Zeltzer stands with a hunting rifle behind the door of his home in Minsk, Belarus on Sept. 29, 2021. (Maria Uspenskaya)
Advertisement

(JTA) —  Hundreds of opponents of the authoritarian regime led by Belarusian President Alexander Lukashenko have been arrested in recent days after security forces killed a Jewish dissident last week.

Belarusian security forces shot dead Andrei Zeltzer, a 31-year-old programmer who opposed the Lukashenko regime, during a raid at his home in Minsk Tuesday.

Zeltzer, who Jewish.ru, a Russian Jewish news site, said was Jewish, died after men from the State Security Committee of the Republic of Belarus entered his home wearing civilian clothes. The men had orders to arrest him, according to Belarusian media, and the government said Zeltser killed one of them.

After the incident, an anchor on STV, a state television channel, delivered a critique of Zeltzer that echoed antisemitic criticism often applied to Jews in the Soviet Union, to which Belarus belonged.

“This was a cosmopolitan, enjoying state benefits to fatten himself up and live in two countries, to make money here and spend it there,” Ryhor Azaronak said about Zeltzer, who he said was a U.S. citizen. (No news organization has reported that Zeltzer was American.) During his monologue, Azaronak deployed the stereotypical accent of Yiddish-speaking Soviet Jews.

Zeltzer worked for the U.S.-based information technology firm Epam, whose founder and CEO, Arkadiy Dobkin, is a Jew from Belarus who now lives in the United States. Zeltzer’s employment by a U.S. company has drawn additional attention to the incident, the latest in what appears to be an accelerating crackdown by Lukashenko on his critics.

Multiple people have died in clashes with security forces in Belarus following a wave of street protests connected to the 2020 presidential election in which Lukashenko, who has ruled Belarus since 1994, claimed victory. External observers and opposition activists have said the elections were a sham and thousands, including a number of Jewish activists, have been arrested.

Belarus has about 9,500 people who identify as Jews. Many of Belarus’s Jews, especially among the younger generations, are displeased by the lack of democratic representation and an independent judiciary in the country. But others say they appreciate the relative religious freedom and personal safety that have characterized the Lukashenko regime.