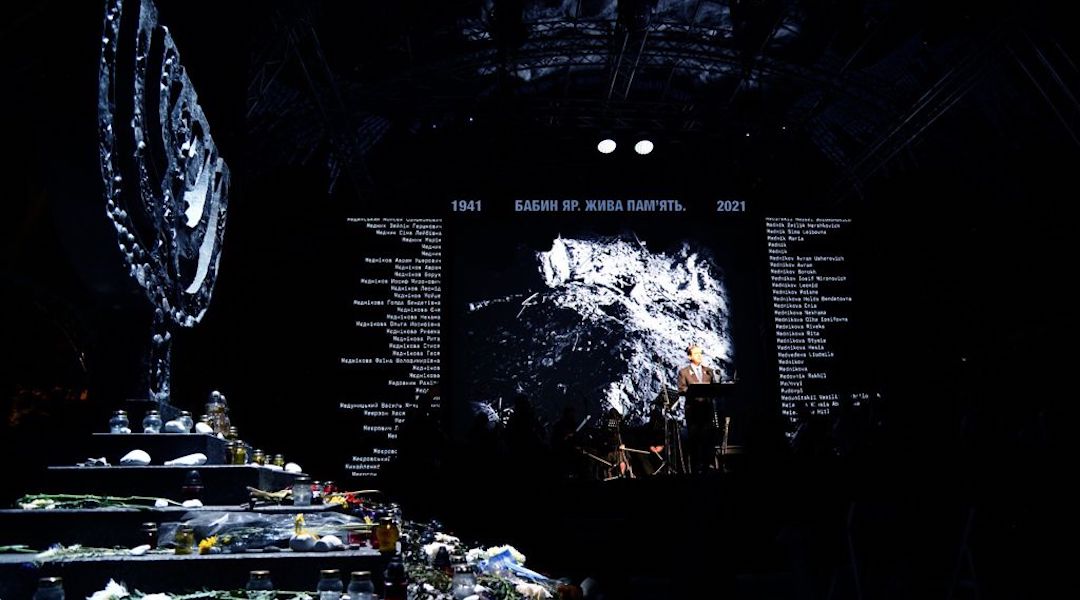 Ukraine unveiled a monument to the tens of thousands of Jews killed in the Babyn Yar ravine near Kyiv, Oct. 6, 2021. (Israel GPO)
Advertisement

KYIV, Ukraine (JTA) — Ukraine’s government inaugurated a memorial complex to the victims of the Babyn Yar massacre this week, 80 years after the tragedy that has become a flashpoint in the country’s collective Holocaust memory.

The memorial at the Babyn Yar site, where Nazis and local collaborators killed some 33,000 Jews in a ravine near Kiev in September 1941, is still under construction. But it currently features a quartz crystal-studded “Wall of Crying,” designed by the famed Serbian performance artist Marina Abramović, and a new wooden synagogue above the only portion of the ravine, into which victims were ordered to lie before they were shot, that remains visible.

By 2026, its organizers say, the center will also house museum space and additional monuments. It costs around $100 million and is privately funded. A large portion of the funding has come from a group of billionaires, including Russian Mikhail Fridman and Ukraine-born Viktor Pinchuk, who are both Jewish.

Various initiatives to commemorate Babyn Yar victims had previously failed to materialize and, for decades, the only reminders of the tragedy were a couple of small and neglected monuments.

“The time for memory has come,” said Ukrainian President Volodymyr Zelensky, who is Jewish, at the inauguration ceremony.

“It’s hard to breathe at this place — thousands of children took their last breath here,” he added.

Israeli President Isaac Herzog spent three days in the country for the inauguration ceremony and other events, including a historic meeting of two Jewish presidents, when he met with Zelensky on Tuesday at Kyiv’s Mariinsky Palace. Herzog’s father Chaim Herzog established diplomatic relations with the newly independent Ukraine in 1991 when he served as Israel’s president.

“The Jewish people have a long and complicated history, interwoven with Ukraine,” Herzog said at the center’s inauguration. In Ukraine “there flourished one of the greatest and most important Jewish communities in the world,” including “leaders and statesmen, intellectuals, poets and great rabbis. They all lived, thought and wrote on the soil of Ukraine.

“A formative event and a chapter that must never be erased from the annals of the family of nations,” he added. “An eternal scar on the surface of our planet.”

Related: The Jewish Telegraphic Agency provided the first news report of the Babyn Yar massacre. Here’s how we covered it at the time.

Plans for the center came under scrutiny in recent years when it was revealed that controversial Russian director Ilya Khrzhanovsky presented a plan for a series of immersive visitor experiences, involving the recreation of Nazi torture and other disturbing images, at the site. The idea was described as a “Holocaust Disneyland” and derided by critics. Those plans were dropped and replaced by a series of monuments and other memorials.

Between 1941 and 1943, around 100,000 people, mostly Jews, were murdered at Babyn Yar in multiple killings. In another historic unveiling tied to the 80th anniversary of the initial massacre on Wednesday, the new center’s researchers published a list of names of some of the more than 150 Nazi perpetrators of the massacre.

Herzog praised the memorial center in a speech, which has been given strong support by the Ukrainian government, saying it “corrects the historic injustice of many years of denial and forgetting, and represents a lesson learned, and a study resource for future generations.”

Zelensky, who does not speak Hebrew, greeted journalists Tuesday at the Mariinsky Palace with “boker tov,” or “good morning” in Hebrew. The former comedian and actor who was elected president in 2019 later opened a press conference following private meetings with Herzog with a “shalom.” 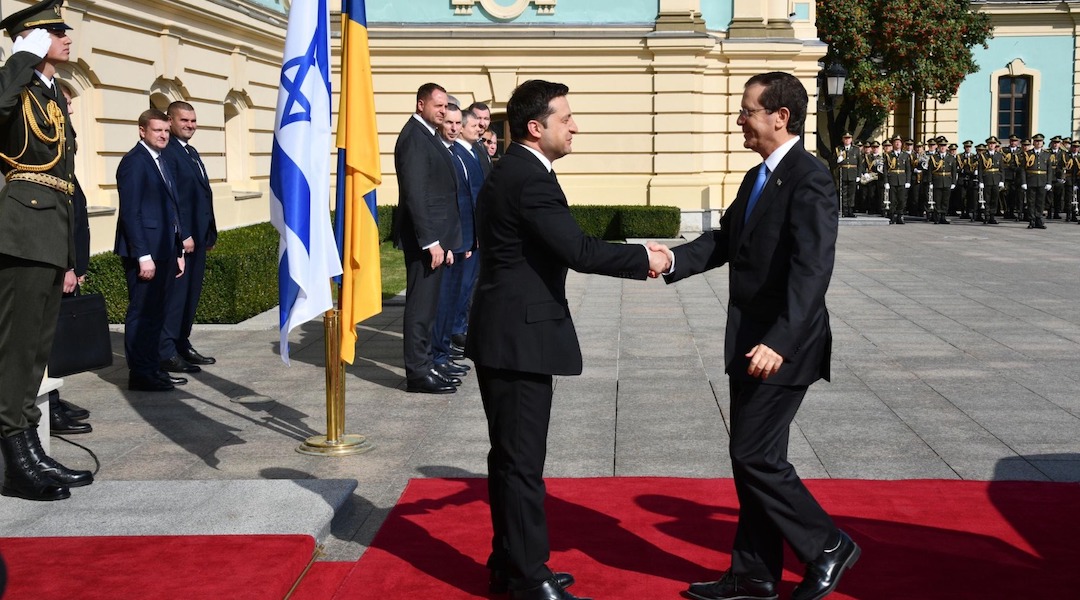 At their press conference, Herzog thanked Zelensky and the Ukrainian parliament for the recent passage of a bill outlawing anti-Semitism and invited the Ukrainian president to visit Israel. Zelensky said publicly that he expected that Israel’s support for Ukrainian sovereignty to be maintained, particularly at the United Nations, in its ongoing territorial disputes with Russia.

Sources say that Zelensky pressed Herzog further on that issue behind closed doors, asking for stronger public support for Ukraine’s efforts to secure the return of Russian-annexed Crimea and occupied territories in eastern Ukraine.

But Zelensky is also said to have recognized that Israel has an important bilateral relationship with Russia that it would not be expected to put at risk.

Herzog told his Ukrainian counterpart that “concerning the conflict between you and Russia, Israel believed “a diplomatic solution to the conflict is the correct solution.”