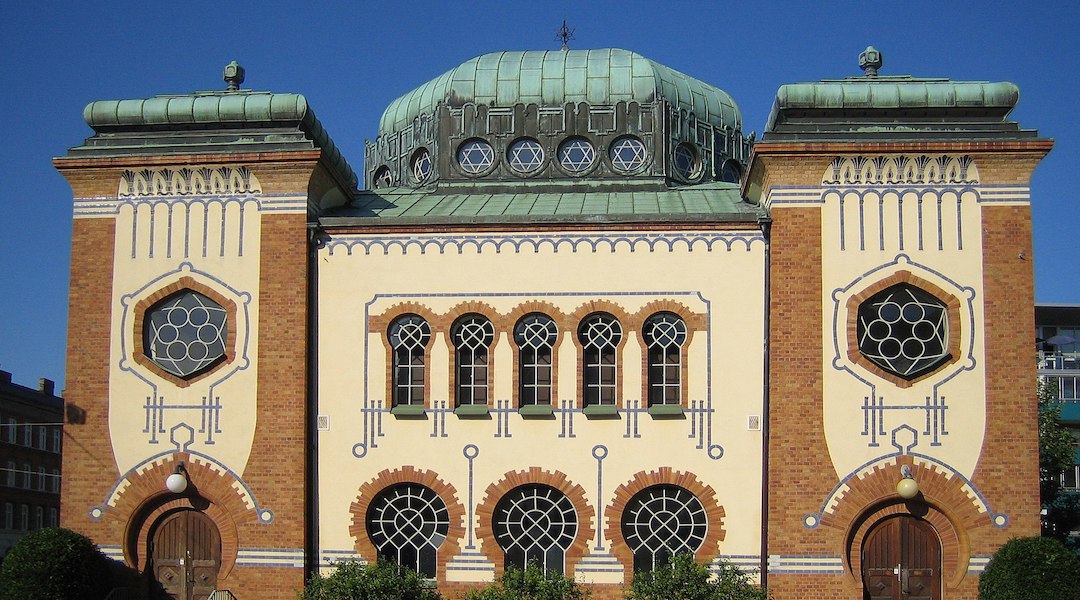 (JTA) — Swedish police are investigating how the words “the Holocaust was a scam” were projected onto the main synagogue in Malmö while that city was holding an international forum on combating antisemitism.

The projection was seen on the Synagogue of Malmö and on other buildings in cities across southern Sweden on Wednesday night, the day of the Malmö International Forum on Holocaust Remembrance and Combating Antisemitism.

Police are handling the case as a hate crime, the Swedish newspaper Dagens Nyheter reported.

The Nordic Resistance Movement, a neo-Nazi group, claimed responsibility for the incident, according to Dagens Nyheter.

The conference had brought together heads of state and other prominent government officials from dozens of countries in a city known for its high rates of antisemitism.

Israel’s strikes in Gaza in 2009 triggered a wave of antisemitic assaults in Malmö, which had then over 1,000 Jews. Then mayor Ilmar Reepalu reacted by instructing the local Jewish community to distance itself from Israel, giving many the impression that he was blaming the victims.

The Jewish community in Sweden’s third-largest city has since dwindled down to around 500.

Despite Wednesday’s synagogue incident, Katharina von Schnurbein, the European Commission’s coordinator on combating antisemitism, told the Jewish Telegraphic Agency on Friday that she thinks the conference shows that “change is possible.”

“The fact that the conference happened in Malmö sends a message, that this sort of thing will not be accepted and will be confronted,” von Schnurbein said.

At the conference, she presented a new strategic plan for combating antisemitism and fostering Jewish life in Europe, published by the European Commission on Oct. 5.

Although the plan does not include a stated budget, von Schurbein said, “it will tap into programs in various departments” and its “components will receive millions of euros in funding in the coming period.”

Among the goals of the plan is to set up a cross-European methodology for documenting and reporting antisemitic hate crimes.

On Tuesday, Jewish community leaders at a separate conference in Brussels complained that the EU plan was “not serious” because it does not address two issues that have alienated local Jews for years: bans on the ritual slaughter of animals and attempts to ban non-medical circumcision.

Von Schurbein said the plan does reference the ritual slaughter issue. Members states need to find “a fair balance between respect for the freedom to manifest religion and the protection of animal welfare,” the document states.

The EU Commission and her office intend to facilitate efforts to strike the balance, von Schnurbein said, and call on “EU countries to ensure through policy and legal measures that Jews can live their lives in accordance with their religious traditions,” she added.

“But when it comes to the document, the Commission is bound by the ruling of the European Court,” which in 2020 upheld the rights of states in Belgium to ban ritual slaughter.