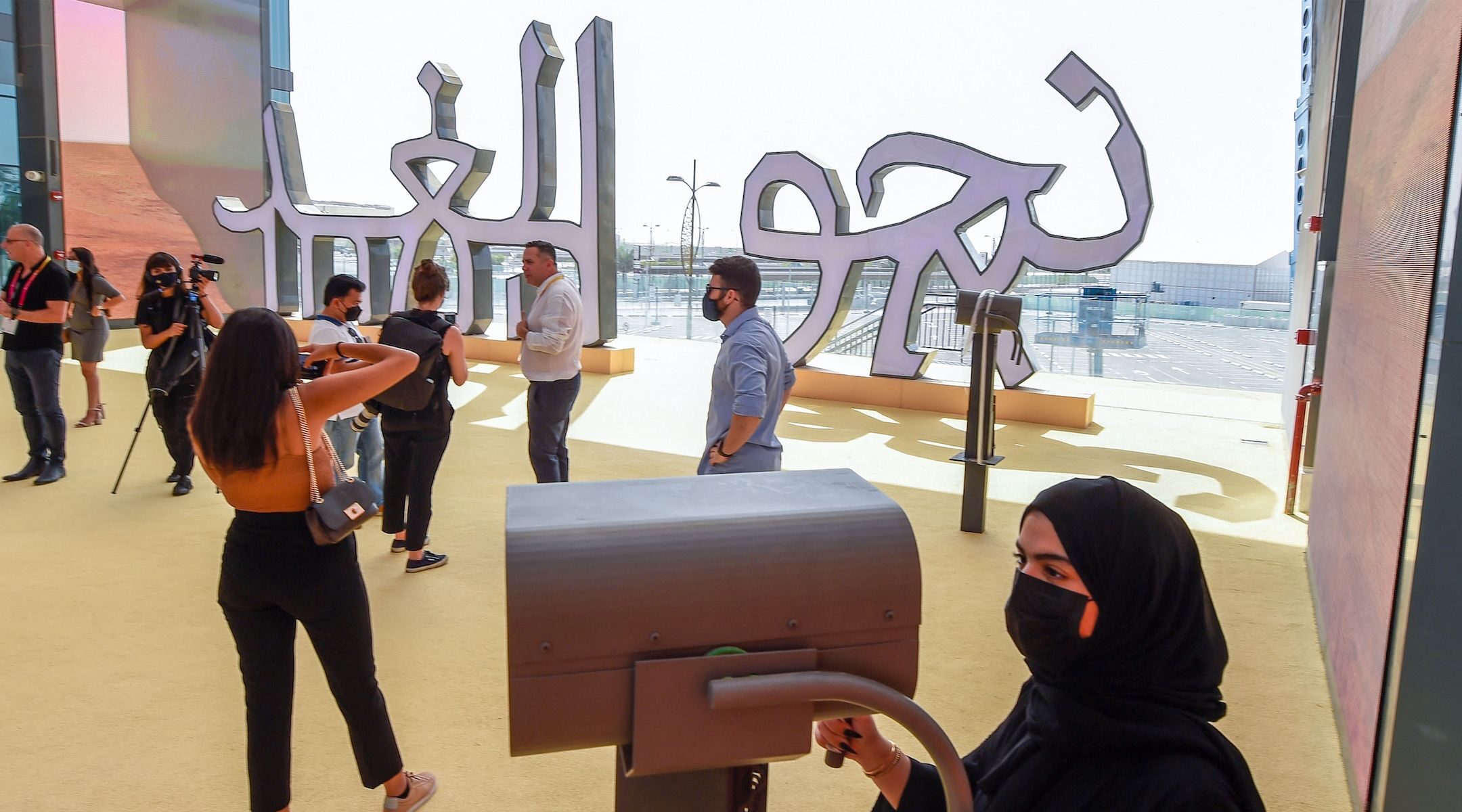 Israel's pavilion at the 2020 World Expo in Dubai includes a sculpture featuring Aravrit, a script that combines Hebrew and Arabic. (AFP via Getty Images)
Advertisement

(JTA) — When Liron Lavi Turkenich designed a writing system combining Hebrew and Arabic characters as a final project in college, she probably could not have imagined that her script would become the focal point of Israel’s pavilion at the 2020 World Expo in Dubai.

But after the Abraham Accords, in which Israel signed diplomatic agreements to normalize relations with the United Arab Emirates, and the peace agreements with other Arab countries that followed, the need for Aravrit, Turkenich’s script that allows both Hebrew and Arabic to be read from the same text, has expanded. The sky is now the limit for Turkenich’s project.

“I would like to get to the Museum of Modern Art in New York. It’s a kind of dream. I would be happy for someone to adopt ‘El Mahar.’ An outdoor sculpture demands attention just as a language creates attention,” Turkenich told Haaretz, referring to the sculpture featured in the Israel pavilion. “El Mahar” means “toward tomorrow.”

Turkenich was first inspired to create the writing system by her uprbinging in Haifa, one of Israel’s most integrated cities where Jews and Palestinians mix frequently and where Arabic is ubiquitous. But Turkenich realized that she tended to ignore that language, which she didn’t understand, and automatically paying attention to the Hebrew which she did.

When she read an article by a 19th century French ophthalmologist who wrote that only the top half of Latin letters were actually needed in order to understand what they said, she decided to test the theory on Hebrew. She found that it was actually only the bottom halves of the letters that were needed in Hebrew. In Arabic, luckily, it was the top halves that were necessary.

By combining the top halves of the Arabic characters and the bottoms of the Hebrew ones, Turkenich created Aravrit. While the script isn’t widely available for use as a downloadable font, Turkenich has used the script to design jewelry and ceramic dishes. And now the massive sculpture — more than 40 feet long and 16 feet tall — that forms the centerpiece of the Israel pavilion.

“Both Hebrew and Arabic have incredible histories. We should not erase them. It’s the same as the political situation: We can’t start from scratch,” Turkenich told JTA in 2017, saying she hoped Aravrit would lead to greater coexistence between Israelis and Palestinians at home and between Israelis and people throughout the Arab world.

“I believe Aravrit sends a message that we’re both here, and we might as well acknowledge each other,” Turkenich told JTA. “That applies to Jews and Arab Israelis, but also to Israel and the Palestinians and Israel and the Arab world.”