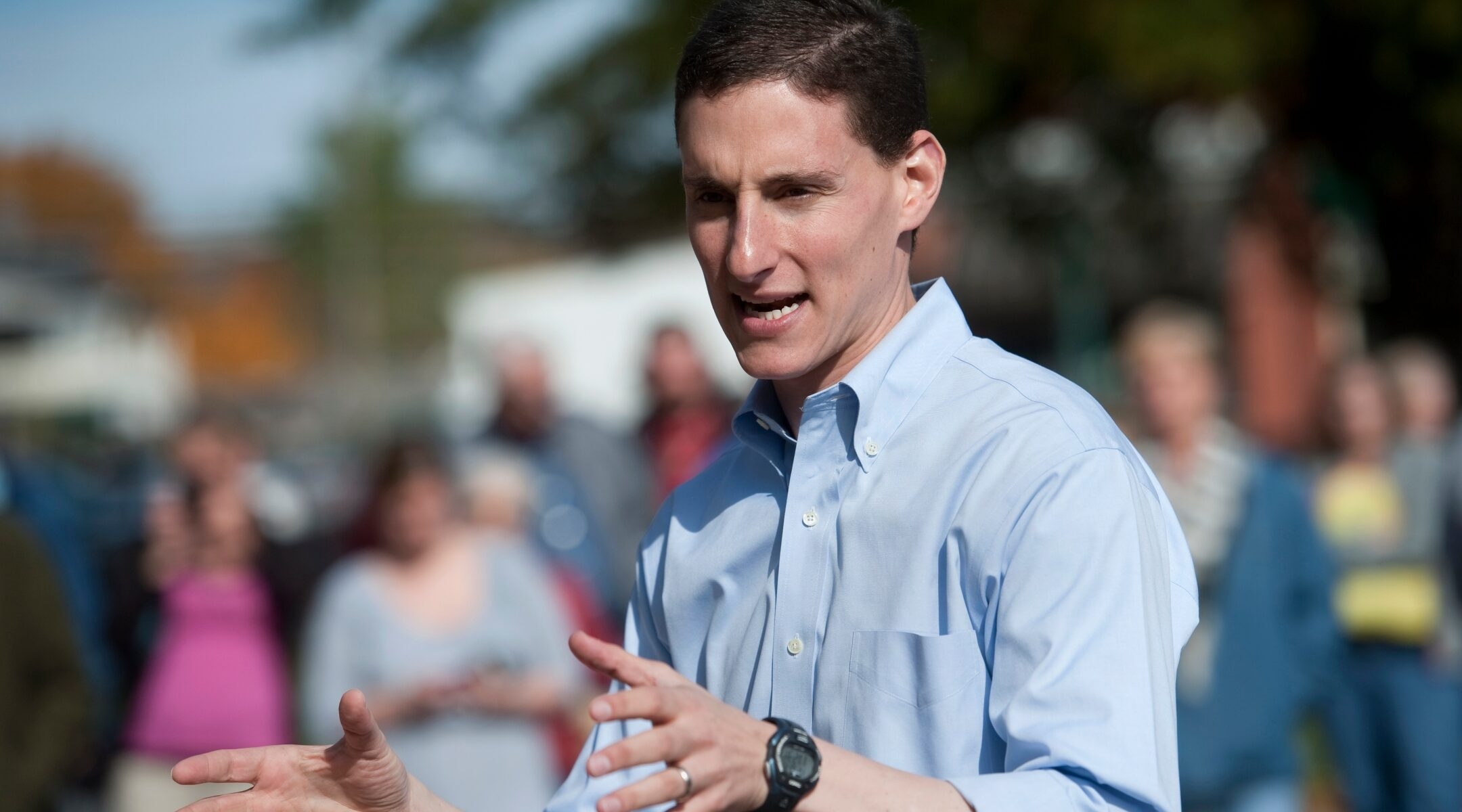 As Ohio’s state treasurer, he ran for a U.S. Senate seat as a young conservative Marine vet with deep ties to local and national Jewish communities. Despite the fact that he lost the election to the incumbent, Democrat Sherrod Brown, Mandel stayed on the rise, and Republicans would urge him to run again in 2018.

Mandel leaned into his Jewish side as a public figure, often noting his upbringing, which included membership in a Conservative synagogue, a stint on the Jewish Community Center softball team and a dad, Bruce, who at one time chaired Cleveland’s Jewish Community Relations Council.

A Wall Street Journal op-ed in 2012 noted Mandel’s Jewishness, arguing that he symbolized a growing diversity in the GOP’s ranks. The Republican Jewish Coalition frequently gushed about their “rising star.” “Go Josh go!” the group wrote in 2015.

Today, Mandel — and the constituency whose support he seeks — look significantly different.

Mandel, 44, is again running for a Senate seat, this time to replace retiring Republican Rob Portman. But first he has to earn the GOP nomination in a crowded primary field. And these days Mandel represents the far-right option for voters.

He claims that Donald Trump won last year’s presidential election and wants Congress to investigate baseless allegations of election fraud. He frequently calls Republicans who have opposed Trump, such as Reps. Liz Cheney of Wyoming and Anthony Gonzalez of Ohio, “traitors.” He says bringing in Afghan refugees exposes American children to predators. He likens coronavirus prevention measures to the conduct of the Gestapo.

And in a notable shift in his relations with the Jewish community, Mandel has become a leader in the movement to promote “Judeo-Christian” values in politics, routinely appearing at evangelical Christian events. 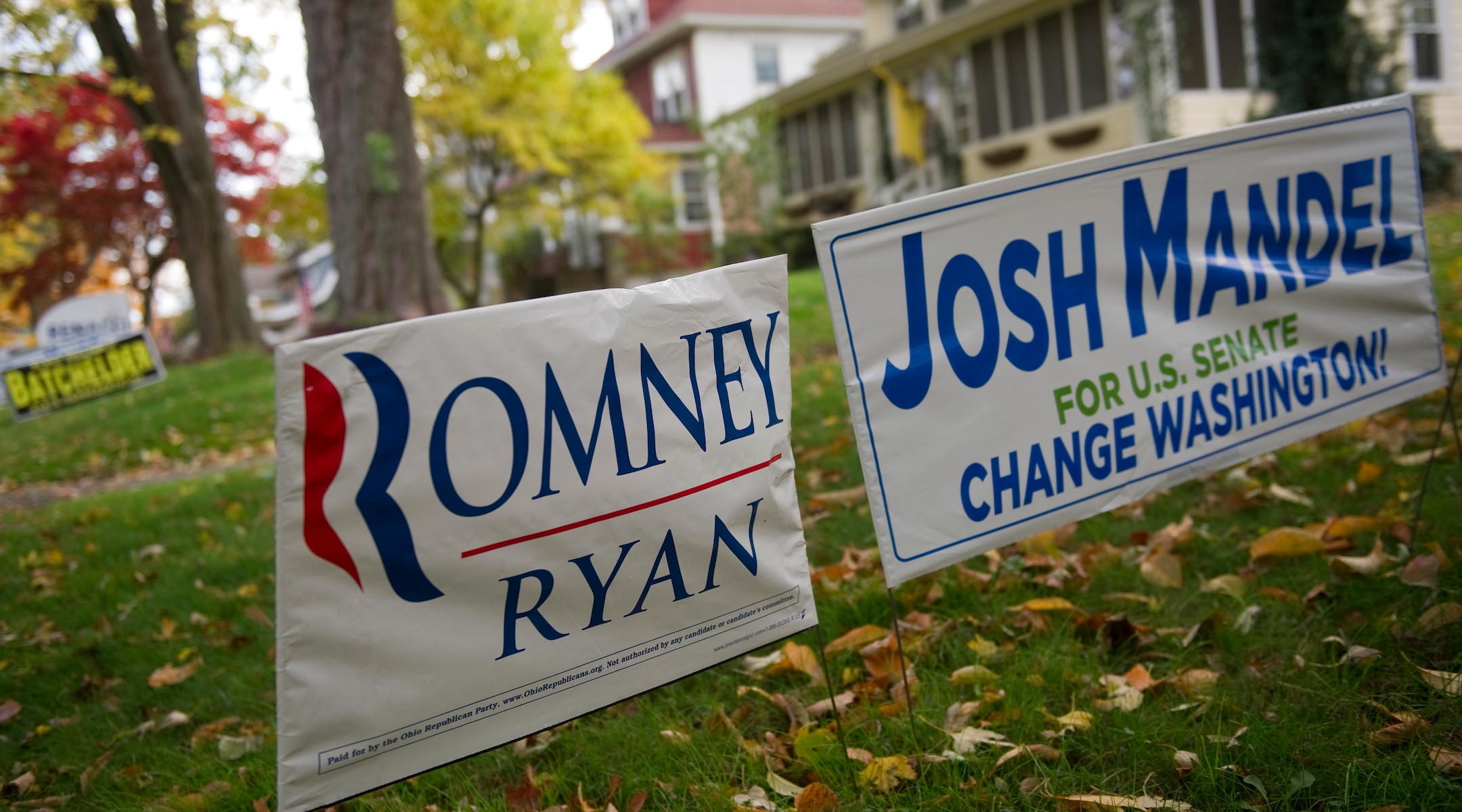 A Josh Mandel sign seen next to one for the Romney-Ryan presidential ticket in Medina, Ohio, fall 2012. Mandel was at the time grouped together with mainstream Republicans like Romney. (Chris Maddaloni/CQ Roll Call/Getty Images)

The front page of his campaign website declares that he is “Pro-God” and features a picture of a church steeple topped with a cross. He frequently deploys the term “Judeo-Christian” on Twitter, without clearly defining its meaning, except usually as a means of attacking Muslims.

“These planes are now being emptied into Cleveland, Toledo and other places in the heart of America,” he said in a Sept. 3 tweet referencing the refugees from Afghanistan evacuated by the United States as Kabul fell to the Taliban. “To protect our kids, our communities and our Judeo-Christian way of life, we must FIGHT this with all our might.”

Faiths and creeds outside the “Judeo-Christian” ethic do not distinguish good from evil, Mandel suggested at a recent debate for the six Republicans running for the Senate seat nomination.

The “Judeo-Christian ethic separates itself from Islam and atheism and all these other belief sets on so many levels, but one of the main levels is our acknowledgment of good vs. evil,” he said.

Mandel has also argued repeatedly that there is no constitutional separation of church and state. He has called for the shuttering of public schools — which he calls “government schools” — and says schools should go “in churches and synagogues.”

Shut down government schools and put schools in churches and synagogues.

The Jewish Telegraphic Agency asked Mandel for an interview. He asked for questions in writing, and has not replied to detailed questions about these and other policy proposals.

“Judeo-Christian” is a recent term, one that most Jewish scholars say was deployed in the 20th century to bring together coalitions to fight fascism, communism and racism. More recently, it has been used as a cudgel, they say, to marginalize secular Americans and those belonging to other minority religions, particularly Muslims.

“Since its brief heyday after World War II, the term ‘Judeo-Christian’ has steadily shrunk in American Jewish parlance,” James Loeffler, a professor of Jewish history at the University of Virginia, wrote in an email interview. “Nowadays it primarily remains in vogue only among certain circles of Jewish political conservatives and religious ultra-traditionalists who seek common cause with the Christian Right. Most other observant Jews regard the term as theologically problematic and historically inaccurate.”

Accusations that Mandel, whose children attend Jewish day school, is abdicating his Jewish roots infuriate him.

The term has been embraced in recent years by politically conservative Jews, including right wing media figures such as Dennis Prager, Rabbi Daniel Lapin and Ben Shapiro, although some Jewish conservatives are not comfortable with the term, arguing that it erases critical differences between Judaism and Christianity.

“While claiming the mantle of shared Judeo-Christian tradition may appeal to some Christian Evangelicals, it comes at the expense of a historic Jewish commitment to religious pluralism and separation of church and state in American politics,” Loeffler said. “American Jews deeply value religious faith, but they commonly recognize that the promise of religious freedom in American society cannot be reduced to an antiquated, exclusionary slogan.”

Many of Mandel’s former admirers wonder about his shift.

“There are a lot of people who had been enthusiastic supporters of Josh who now wonder what happened to him,” a senior member of the RJC board of directors, who spoke on background because of the sensitivity of calling out a fellow Republican, said in an interview. “The Josh Mandel who is running today is unrecognizable from the one they enthusiastically supported in 2012 and 2018,” the last two times Mandel ran for Senate. On

One indicator of how far Mandel’s status has dipped among Ohio’s politically conservative Jewish community is the stance of Judith Brachman, the doyenne of Jewish Republicans in the state, who has endorsed one of Mandel’s opponents.

Brachman donated to Mandel’s previous campaigns. But last month, she wrote to the Columbus Dispatch that she favored State Sen. Matt Dolan, a relative moderate, in the Republican primary race.

She cited her background as an official of both state and federal Republican administrations, under Gov. George Voinovich and Ronald Reagan, respectively. Brachman said Dolan would get her vote because he would not embarrass the state.

“Dolan represents a long Ohio tradition of measuring public resources wisely, and would reflect principles established by our distinguished current Sen. Rob Portman,” the moderate Republican who has been close to the state’s Jewish community, wrote Brachman. “Support for Matt Dolan will preserve Republican values and bring honor to our state in the United States Senate.”

Brad Kastan, a longtime donor to the GOP and leader in the Columbus Jewish community, said Mandel’s attacks on Anthony Gonzalez as a “traitor” for voting to impeach Trump rubbed many Republican Jews in Ohio the wrong way.

Gonzalez, the son of Cuban immigrants and a former NFL wide receiver, is popular among politically conservative Jews in the state. “I think the vitriol that Josh attacked him with, people were really disappointed,” Kastan said.

Mandel, once a favorite of the RJC and a fixture at its events, did not show up at its annual conference in Las Vegas last week.

Mandel’s embrace of Christian nationalist tropes and extremist candidates means he is no longer a poster boy for the diversity touted in that 2012 Wall Street Journal op-ed — a value that the RJC has continued to push in the wake of the Trump presidency. Mandel has endorsed Georgia Rep. Marjorie Taylor Greene, who has been accused of pushing antisemitic tropes, and Laura Loomer, a Jewish Republican who has proudly called herself an Islamophobe. 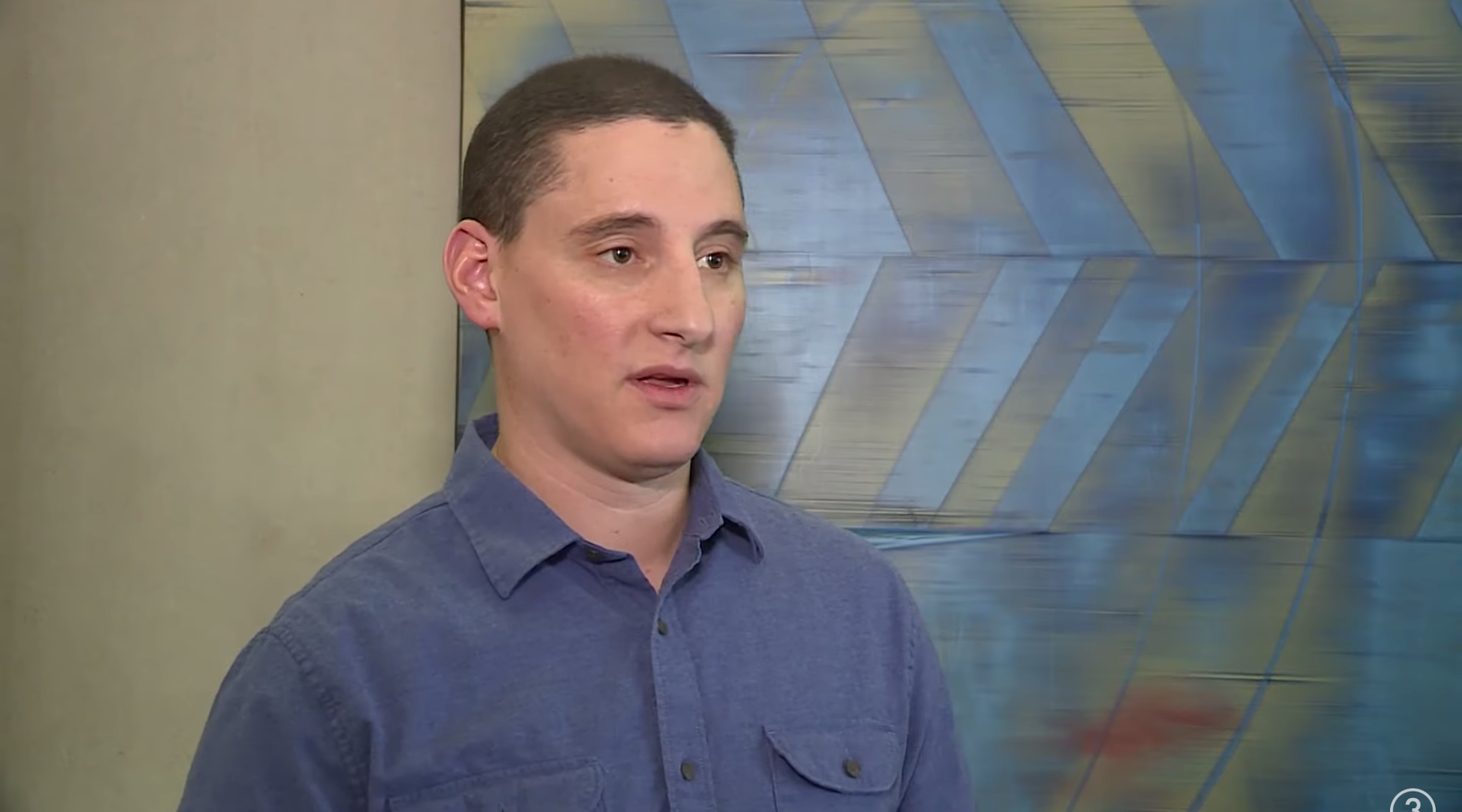 Josh Mandel, interviewing with a local TV station, during his Senate run this year. (Screenshot from YouTube)

Mandel’s gravitation toward culture war politics isn’t a complete surprise to everyone. In 2010, he ran, and then dropped, an ad insinuating that his Black political opponent was a Muslim (he was not).

Kastan, who has known Mandel since they were both leaders at the Ohio State University Hillel, said he noticed Mandel change after his second tour in Iraq in 2007, which Mandel’s friends say was particularly harrowing. Mandel served as an intelligence specialist in Haditha, a town where resistance to the Americans was notably fierce.

“When Josh came back from Iraq, his second tour of Iraq, I think his views on Christian-Judeo, on America, and the threat of Islamic radicalism, Islamic terrorism, jihadism, whatever you want to call it — I think that was very, very informed by his tours in Iraq,” he said. “I don’t doubt his sincerity there.”

In 2012, a bunch of Mandel’s in-laws wrote a “whatever happened to Josh” letter to the Cleveland Jewish News, excoriating him for opposing marriage rights for LGBTQ people.

“We still remember the excitement surrounding your wedding, and how happy our family members were as they described it afterward,” said the nine relatives by marriage in the 2012 letter. “Your cousins, Ellen Ratner and Cholene Espinoza, are among the many wonderful couples whose rights you do not recognize. It hurts us that you would embrace discrimination against them and countless other loving couple[s] in Ohio and around the country.”

Mandel’s ex-wife, Ilana Shafran Mandel, is a granddaughter of one of the nine Ratner siblings who built a real estate empire in Cleveland.

Mandel dropped out of the 2018 Senate run, citing his wife’s health needs. The couple split up in 2020, and say they are on good terms; Ilana Mandel is backing his Senate run. Now he is dating his campaign finance director, Rachel Wilson, and the two reportedly argue so heatedly in front of staff that it has created a toxic work environment, driving away staffers.

Mandel still has some mainstream pro-Israel pull: NORPAC, the right-leaning pro-Israel political action committee, is backing him, as is Fred Zeidman, a Houston area businessman who is an influential Republican Jewish donor and chaired the U.S. Holocaust Memorial Museum under President George W. Bush. Zeidman tends to back moderates within the party, but says Mandel’s bona fides as an Israel backer and a veteran make him stand out.

He also said Mandel is an astute politician who understands how critical it is to cultivate evangelicals in Ohio, and how important it is to uphold Trump with the GOP base — even if he wishes that Mandel “had not gone as hard right as he has, because I don’t agree with all of those policies.”

“I think he has been a student of what he thinks he needs to do in the state that he’s running in,” Zeidman said. “And we’ll see how that plays out. Now after he’s elected, will he back off of that —  he’ll have a six year term — or will he stick with a lot of that? Because I don’t think it’s totally consistent with his policies historically. But can I blame him? He’s got to win.”

Kastan said Mandel had to distinguish himself in a field of six Republicans, all with credible shots at the nomination, including Dolan, the state senator; “Hillbilly Elegy” author J. D. Vance; and Jane Timken, a former Ohio GOP chairwoman. An early internal poll shows Mandel leading the field.

“It erases five people if you can grab 35%” of the Republican base, Kastan said. “He’s just clearly leaning into that.”