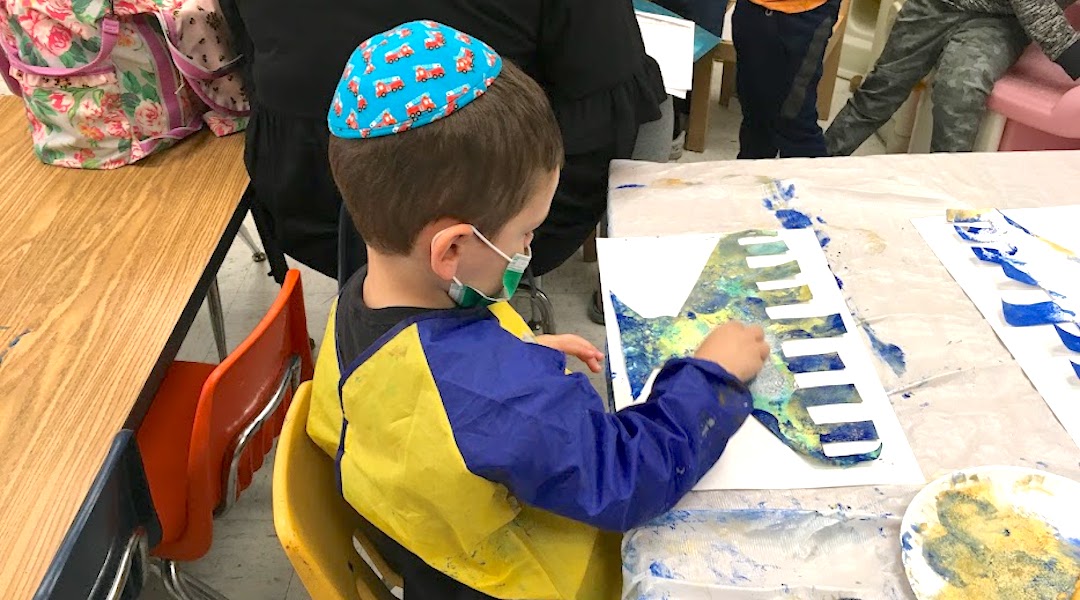 A student at the Hebrew Academy of Nassau County in West Hempstead creates a Hanukkah decoration. Tonight is the second night of Hanukkah 2021. (Courtesy HANC)
Advertisement

Good Monday morning, New York, and Happy Hanukkah! Join us and the Center for Jewish History tonight at 6:00 p.m. for a Zoom tribute to William Helmreich, the late sociologist, author, flaneur, scholar of Judaism and distinguished professor. Featuring Jeffrey S. Gurock, the Libby M. Klaperman Professor of Jewish History at Yeshiva University, and Matt Green, who walked every block of New York City for his film “The World Before Your Feet.” Moderated by Sandee Brawarsky. Register here.

JUST DOUGH IT: At Fan-Fan Doughnuts in Bedford-Stuyvesant, baker Fany Gerson reinvented her recipes with influences from her Mexican and Jewish background. (Jewish Week via JTA)

FINALE: Broadway titan Stephen Sondheim, who died Friday at age 91, was perhaps the most admired and influential figure in an industry shaped in large part by Jewish composers, lyricists, producers and directors. (JTA)

IN CHAMBERS: The NY City Council will debate today whether to create a two-year look-back window for all sex abuse claims, regardless of when they arose.

A Hanukkah menorah lighting in Times Square tonight will raise awareness about the rise in antisemitism. The “Shine a Light” menorah lighting is being jointly organized by UJA-Federation of New York, the Jewish Community Relations Council of New York, AJC New York, the Anti-Defamation League and the NY Board of Rabbis. Performances and synchronized displays on Times Square billboards will begin at approximately 5:30 p.m.

UJA-Federation and our friends at The Nosher have created the “Latkepalooza!” cookbook, an ebook featuring eight latke recipes for the eight nights of Hanukkah. Get a copy here.

Get to know the story of Judith, the overlooked Hanukkah heroine. In this Zoom class with My Jewish Learning, teacher and author Sandra E. Rapoport will present her original lecture, “Judith: Hanukkah Heroine Excluded from the Hebrew Bible.” Register here. 2:00 p.m.

Celebrity chef Einat Admony, along with Masbia house chef Ruben Diaz, will light the menorah, hand out toys and fry latkes at a Hanukkah party for widowed and divorced mothers and children at Masbia of Flatbush, the kosher food pantry at 1372 Coney Island Avenue in Brooklyn. Tonight, 7:00 p.m.

Learn how Ben-Gurion University is launching the School of Sustainability and Climate Change, the first school in Israel devoted to tackling the challenges of living in the Negev environment and ways that all can live more sustainable lives. Register for this Zoom webinar here. Noon.

In the first part of a three-part virtual series, “New York: The Greatest Jewish City in the World,” David Kaufman will contextualize the growth of New York’s Jewish population within the larger frame of Jewish history. Register here for this Lower East Side Jewish Conservancy event. 7:00 p.m.

Photo, top: A student at the Hebrew Academy of Nassau County in West Hempstead creates a Hanukkah decoration. Tonight is the second night of Hanukkah 2021. (Courtesy HANC)