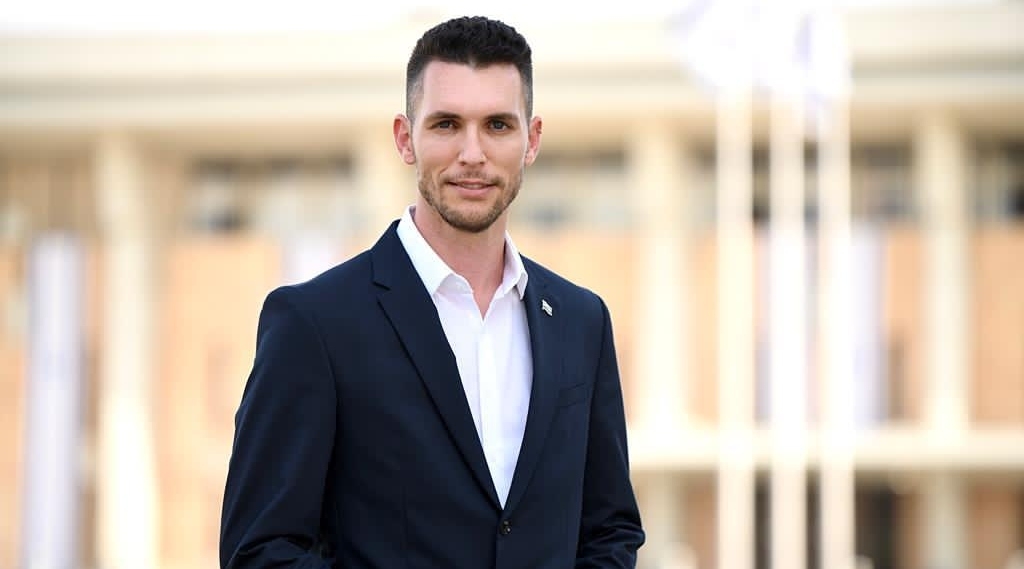 His challenge is that he is bound by an Israeli political reality that has shifted to the right.

It’s a dilemma that he understands, and hopes to bridge.

“I want to try and promote this so-important relationship,” Roll said earlier this month of the U.S.-Israel relationship, speaking at a reception on Nov. 16 for national U.S. media, Jewish media and Arab media. “And first and foremost is to, as I said, reach out and extend dialogue and hear different thoughts, and even be open to criticism because that’s part of talking.”

Israel’s young government, led by Prime Minister Naftali Bennett and Foreign Affairs Minister Yair Lapid, has made a priority of restoring relations with the American left. Roll — 37 years old, strikingly handsome, trim and poured into a bespoke wardrobe, fluent in English — is part of that charm offensive.

The problem is policy: Israel maintains many of the policies that stoked tensions with the left in the first place. Among them: advocacy for a tough U.S. stance toward Iran, expanding settlements in the West Bank, maintaining Israel’s hold on all of Jerusalem  and nixing for now moves toward Palestinian statehood.

That contradiction was sharply illustrated when, returning from the United States, Roll canceled scheduled meetings with Belgian’s left-leaning government because of a law it just passed requiring goods manufactured in settlements to be labeled as such.

“The Belgian government’s decision to label products from Judea & Samaria strengthens extremists, does not help promote peace in the region, and shows Belgium as not contributing to regional stability,” Roll said on Twitter, using the biblical names for the West Bank preferred on the Israeli right.

Those were the kind of policy flash points Roll tried to avoid during his U.S. tour, when he met with Democratic lawmakers and engaged them on LGBTQ+ issues. He and his husband, Israeli pop star Harel Skaat, had their two children, via a surrogate, in the U.S. because of restrictions for LGBTQ+ Israelis.

Still, Roll faced sharp questions in his meetings on policies on Iran and on the Palestinians.

“We have nothing to hide,” Roll said in an interview. “I’m here to keep an open dialogue and give them answers about what is going on in Israel.”

Roll said at the media reception that one reason for past tensions was former Prime Minister Benjamin Netanyahu’s confrontational tone and his willingness to write off progressives and Democrats.

“Israel has always been a bipartisan issue, and our government and our ministry, we intend to keep it that way,” Roll said at the reception. “I think that keeping it that way, is not just saying that, but actually taking the time to reach out to both houses”  — referring to liberals and conservatives — “and to open dialogue. And I think that, you know, there were times where we didn’t do it, it wasn’t done as much as it should be in my eyes.”

Roll met during his U.S. tour with Republicans and with centrist Democrats, but progressives were a key target. Democrats on the left have openly called to defund U.S. defense assistance to Israel. The growth of a party wing that does not want to automatically fund Israel’s defense needs has set off alarm bells in Israel.

Roll’s visit comes after progressives complained that the Biden administration was trying to push through extra money for Israel’s antimissile system, Iron Dome, without debate.

Establishment Democrats gave in to the demand for debate and after a contentious session, most (but significantly not all) of the progressive caucus voted for the funding.

Prior to arriving in the U.S., Roll met with progressives about whom to meet, and had an off-the-record meeting with an array of Jewish progressive groups, none of which agreed to be identified. Since the hostilities between Israel and Hamas in Gaza in May, American progressives have increasingly questioned their Jewish allies’ Israel ties. An environmental group last month called for barring some progressive Jewish groups from a voting rights coalition because of their pro-Israel credentials, and Rep. Jamaal Bowman, a Democrat from New York., is facing expulsion from the Democratic Socialists of America because he recently toured Israel with J Street, a liberal pro-Israel group.

Bringing Jewish progressives into the conversation was a priority for Roll, who used the same term, “family,” that Lapid has embraced in Jewish outreach. Netanyahu essentially cut off Jewish progressives and made it clear that he saw Evangelical Christians as more reliable than Jews in supporting Israel.

“We are all part of one family. This is the way I see things and you know, families, they might have disagreements, and that’s fine,” Roll said in the interview. “What family doesn’t? But the main thing is that we can always sit together and discuss these disagreements and reach a conclusion and sometimes we can’t reach a conclusion but we want people to know that they are heard.”

Among progressive lawmakers, Roll met with Rep. Jerry Nadler, the New York Democrat and chairman of the House Judiciary Committee who convened the unofficial Jewish caucus for the get-together. (Nadler’s office did not return a request for comment.) Roll also met with Sen. Jon Ossoff, a Jewish Democrat from Georgia; Sen. Tammy Baldwin of Wisconsin; Rep. Ritchie Torres, of New York, a prominent and rare defender of Israel among Democrats seems as progressive; Sen. Chris Van Hollen of Maryland, who has been sharply critical of some Israeli actions this year; and Rhode Island’s Rep. David Cicilline, who is Jewish and co-chairs the congressional LGBTQ Equality Caucus.

“We spoke about the importance of the increasing visibility of LGBTQ+ lawmakers here in the U.S. and Israel and the role that organizations like the Equality Caucus can play in inspiring people to run for public office, in supporting LGBTQ+ elected officials, and in helping to push forth an agenda of equality for all – regardless of sexual orientation and gender identity,” Cicilline told the Jewish Telegraphic Agency in an email. “I look forward to our future discussions.”

Bennett met with President Joe Biden in August and made it clear he was ready to work behind the scenes on contentious issues, like disagreements over whether the United States should reenter the Iran nuclear deal. Netanyahu made his disagreements with Democrats very public.

Lapid on his own visit last month emphasized common values in meetings with Democratic Rep. Nancy Pelosi, the speaker of the U.S. House of Representatives, and Antony Blinken, the secretary of state.

Israeli government officials and pro-Israel groups often emphasize Israel’s liberal LGBTQ policies in their pitch to progressives, noting the repression queer people suffer elsewhere in the Middle East. Roll is no exception: In an interview, he noted that Israel recently become one of the first nations to allow openly gay men to give blood.

“I just went and donated a lot a few days ago and you know, it felt good after years of being out of the closet, all of a sudden you can do that again,” he said.

He noted that Iran, Israel’s most belligerent regional enemy, continues to execute people who are gay, and he gets angry when anyone brings up the term “pinkwashing,” the accusation that Israel advertises gay rights to distract attention from its treatment of Palestinians. His life, he says, is not designed to prove a point. 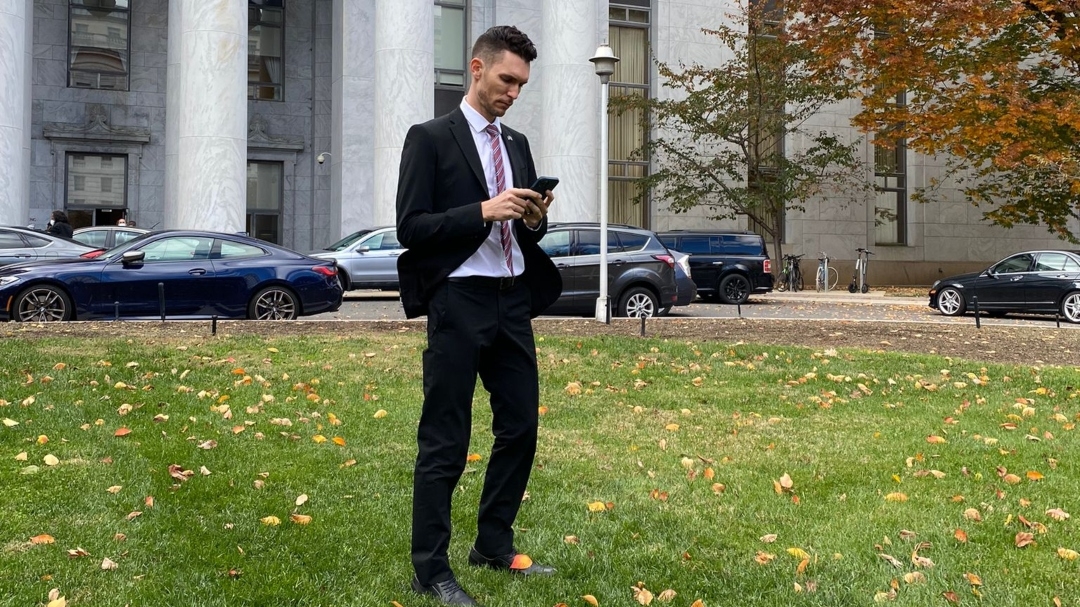 Roll, a lawyer who emerged as an advocate for LGBTQ rights before he entered politics, is nonetheless sensitive to the strides he feels Israel has yet to make. He is candid in describing his difficulties marrying in a country where the Orthodox rabbinate controls Jewish marriage and will not countenance same-sex marriage. He and Harel were married remotely by an officiant in Utah, an option that only emerged during the pandemic.

He also advocates for surrogate parenthood. He has two children through surrogacy, a boy and a girl born in Oklahoma, and speaks warmly about the Reform movement, which helped walk him through the surrogacy. (Israel for years extended surrogacy rights only to heterosexual couples and single women; its Supreme Court in July extended it to gay men.)

“The Reform Movement was so, so kind and so welcoming and you know, doing surrogacy in a foreign country that’s, you know, it’s a journey,” he said.

But unlike other Israel defenders, Roll does not cast Israel’s gay-friendly environment as a be-all and end-all for progressives; instead, he cites it as an example of how Israel is moving in the right direction.

The government, he said in the interview, “is the most diverse coalition we’ve ever had,” noting the inclusion of an Arab party for the first time in a governing coalition. “Everyone and anyone in Israel can now see someone in this government who they can relate to.”  (Arab parties in the past have supported Israeli governments only from outside the coalition.)

“We have a record number of female ministers, we have ministers with disabilities, we have openly LGBTQ members of the government, me included,” he said. “We just passed and we allocated a record number of dollars, it’s about $10 billion, for Arab society. It’s not going to mean everything, but it’s definitely going to do good work at catching up on this ongoing gap” between Jewish and Arab Israelis.

He said that the budget also increased services for the LGBTQ+ community sixfold, and mentioned the prominent role Israel played at the recent conference on climate change in Glasgow.

Roll made the case that listening has its own rewards.

“It’s about taking the time to come here and meet with people and create, you know, relationships first hand, actually meeting with people,” he said at his meeting with Washington media. “It’s a weird concept, you know, after COVID, but still there’s no substitute to actually sitting down with a person and you know, learning what he or she are all about.”