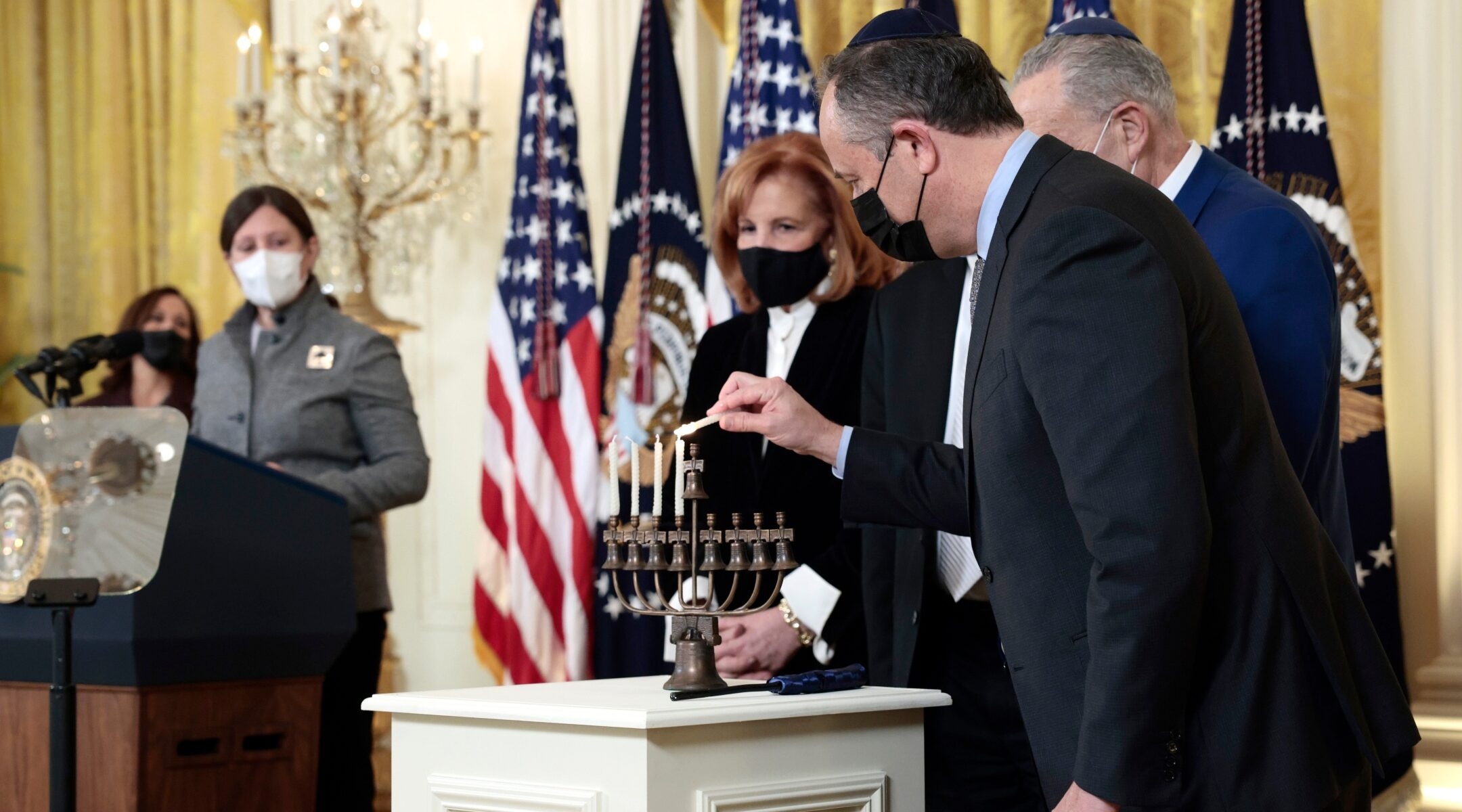 WASHINGTON (JTA) — Douglas Emhoff was ubiquitous this Hanukkah week, which makes sense — he is the first Jewish spouse of a president or vice president, and was consequently very in demand among Jews this first holiday season of the Biden presidency.

But Emhoff’s happy Jewishness, a robust embrace of his tradition and faith that has become his hallmark, was also emblematic of the message that the Biden administration hoped to convey through the Jewish holiday: American diversity should be made visible.

At a White House candle lighting ceremony Wednesday night in the East Room in front of 150 people, Emhoff and his wife Kamala Harris talked about displaying a menorah in the window of one’s house — which, as a means of expressing pride in one’s Jewishness, is seen as a mitzvah in Judaism.

For the couple, the move doubles as a metaphor for the diversity that Biden administration officials say was sorely lacking during the presidency of Donald Trump.

“A few weeks ago, I visited my childhood home in Old Bridge, New Jersey,” Emhoff said. “And I actually got to peer into the house and I saw the window sill where our family menorah sat. To think that today, I’m here before you as the first Jewish spouse of an American president or vice president celebrating Hanukkah — it’s not lost on me that I stand before you all, on behalf of all the Jewish families and communities out there across our country.”

Harris, speaking immediately after Emhoff, recalled how a Montana town reacted in 1993 after a brick was thrown through the window of a home displaying a menorah.

“When a brick was thrown through the window of a Jewish home in Billings, Montana, the town came together, thousands put menorahs in their windows in a stand against hate,” she said.

In their social media Hanukkah message, Harris and Emhoff made a point of posing next to the window of the vice presidential residence as they lit their menorah.

President Joe Biden, when he spoke, drew blunt comparisons between his policies and those of his predecessor. Introducing his Jewish Cabinet members, he asked Merrick Garland, the attorney general, to stand up.

“He is practicing the Jewish tradition of restoring justice to the Justice Department,” he said, alluding to complaints by Democrats that Trump made the ostensibly independent department a vassal for his authoritarian tendencies.

Biden, who in part launched his 2019 campaign because he said he was appalled that Trump had equivocated in condemning the deadly 2017 neo-Nazi march in Charlottesville, Virginia, also implicitly chided Republicans for holding up the nomination of Deborah Lipstadt, the Holocaust historian, to become the State Department’s antisemitism monitor.

“We have to stand against the resurgence of this tide of antisemitism and other forms of intolerance and hate here at home and around the world,” Biden said. “In that effort, there is nobody more qualified than Professor Deborah Lipstadt to be our special envoy to monitor and combat antisemitism.”

First Lady Jill Biden cast the occasion as a transition out of a period of darkness, referring to the emergence from the isolation of the coronavirus pandemic, and framing as heroes two communities that have been vilified by portions of the right: medical personnel and teachers.

Hanukkah is “a story of finding the courage to stand up for what’s right, even when the odds are against us, of faith that finds the foundations of our future in the wreckage of our past and a hope that spreads from the heart, like the flame of shamash,” she said.

One of the two rabbis present was Aaron Glatt, an infectious disease doctor and a rabbi.

Emergence from the pandemic was another theme this Hanukkah week: On the first night of Hanukkah, American Friends of Lubavitch presided over a larger turnout than last year for the lighting of the National Menorah on the Ellipse in front of the White House. (Emhoff spoke this year.) Rabbi Levi Shemtov, the executive vice president of the American Friends of Lubavitch, said turnout increased as much as sixfold — from 500 socially-distanced seats last year to a turnout of 2,500-3,000 this year.

The Congressional Hanukkah party held Tuesday night was virtual, over Zoom, but for the first time, Shemtov organized an outdoor menorah lighting on Capitol Hill. Both congressional events had a rare bipartisan flavor; they were organized by Reps. Debbie Wasserman Schulz, a Florida Democrat, and Lee Zeldin, a New York Republican who is running for governor there. Both figures are hard-hitting partisans, but both were effusive in their praise for one another.

Change was also on display at the Israeli embassy’s Hanukkah party on Monday night, the inaugural event for the new ambassador, Michael Herzog. Herzog’s predecessor, Ron Dermer, and Dermer’s boss, former Prime Minister Benjamin Netanyahu, were close to Republicans to the point of alienating many Democrats and liberal Jewish organizations. Attendance by Democrats and liberals was increasingly rare at Israeli embassy events during the Trump years.

This year, two top Jewish Democrats in the Senate, Chuck Schumer of New York, the majority leader, and Ben Cardin of Maryland, a leader in human rights advocacy, lit the candles, and representatives of liberal Jewish organizations were in attendance.

Herzog, who is the Israeli president’s brother and a veteran national security official, in his remarks before the lighting picked up on one of the Biden administration’s favorite themes, diversity, and spun it into a major theme of the new Israeli government: Reaching out to Democrats and Republicans alike.

“Here with us are many friends from a diverse array of backgrounds, histories, entities, and perspectives,” he said. “It is with intention and purpose that I embrace that diversity because it is part of our strength. Our doors and hearts are open to each and all of you.”