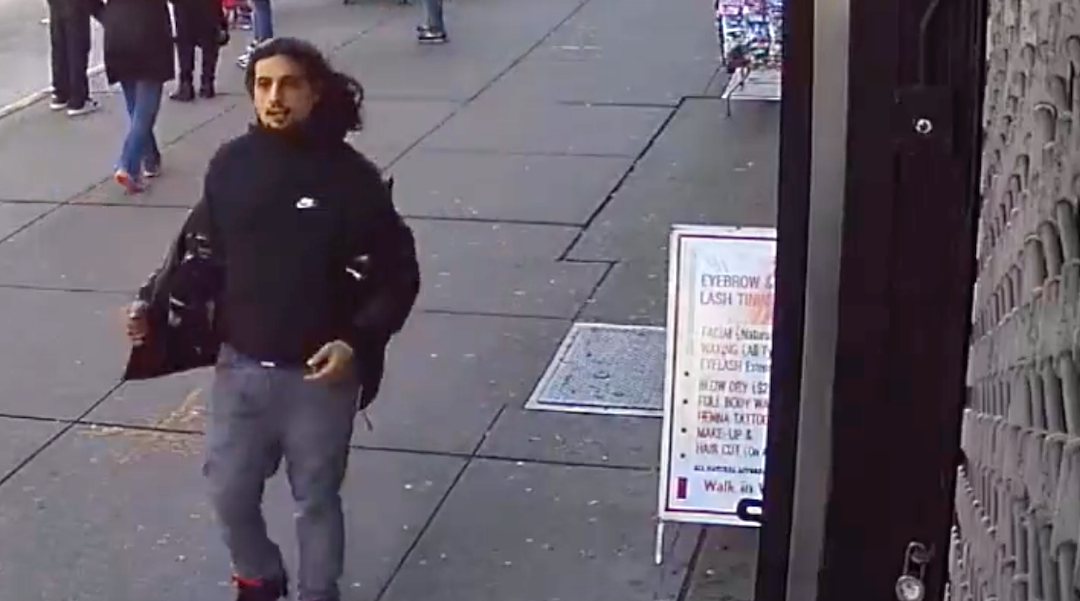 The NYPD Hate Crimes unit released footage of an alleged assailant who taunted and struck a Jewish man in Bay Ridge on Sunday, Dec. 26, 2021. The victim was wearing a sweatshirt with the logo of the Israeli army. (NYPD)
Advertisement

Good morning, New York. Gov. Kathy Hochul today announced 13 new state testing sites to address the recent surge in COVID-19 cases, including ones in each of the five boroughs. And the MTA is warning passengers that fewer trains will be running through at least Thursday due to staffing shortages.

HATE CRIME: Two Jewish college students in Brooklyn, including one wearing a sweatshirt with the emblem of Israel’s military, were assaulted Sunday at a store in Bay Ridge by attackers calling them “dirty Jews.” Gov. Kathy Hochul condemned the incident. (New York Post)

OF BLESSED MEMORY: This week we remember some of the Jewish New Yorkers we lost in the past year — pathbreaking women, innovative policy makers, revered educators and often unheralded everyday people who help sustain their communities. Read the stories of 18 remarkable people here.

A SURVIVOR’S STORY: In 2018, Manhattan’s Museum of Jewish Heritage and HBO co-presented “The Number on Great-Grandpa’s Arm,” an award-winning documentary  and exhibit intended to teach children about the Holocaust. Last week, the movie’s subject — Jack Feldman, who survived a series of Nazi labor and death camps — died at his home in Rochester, New York. He was 95. (JTA)

THE BILL COMES DUE: This is Mayor Bill de Blasio’s last week in office and reviews of his two terms are rolling in. The consensus: Even when his policies were popular, de Blasio managed to alienate allies and declined to embrace his role as New Yorker in Chief.

“Licorice Pizza,” a new movie starring the pop star Alana Haim, is in part a celebration of an era when Hollywood made Barbra Streisand a sex symbol and “somehow managed to change the entire definition of beauty.” Stephen Silver explains. (JTA)

WHAT TO DO TODAY

There aren’t many official events this holiday week, so here is our suggestion if you are able to get out and enjoy what is shaping up as a brisk but sunny day: Get yourself down to Battery Park or cross the river to Liberty Park in Jersey City. Take in the breathtaking views of Ellis Island and the Statue of Liberty. As you do, listen to two podcasts by history mavens The Bowery Boys, one on the history of Ellis Island, the other on Sephardic Jewish poet Emma Lazarus and the immortal poem she wrote for the statue’s unveiling in 1886.