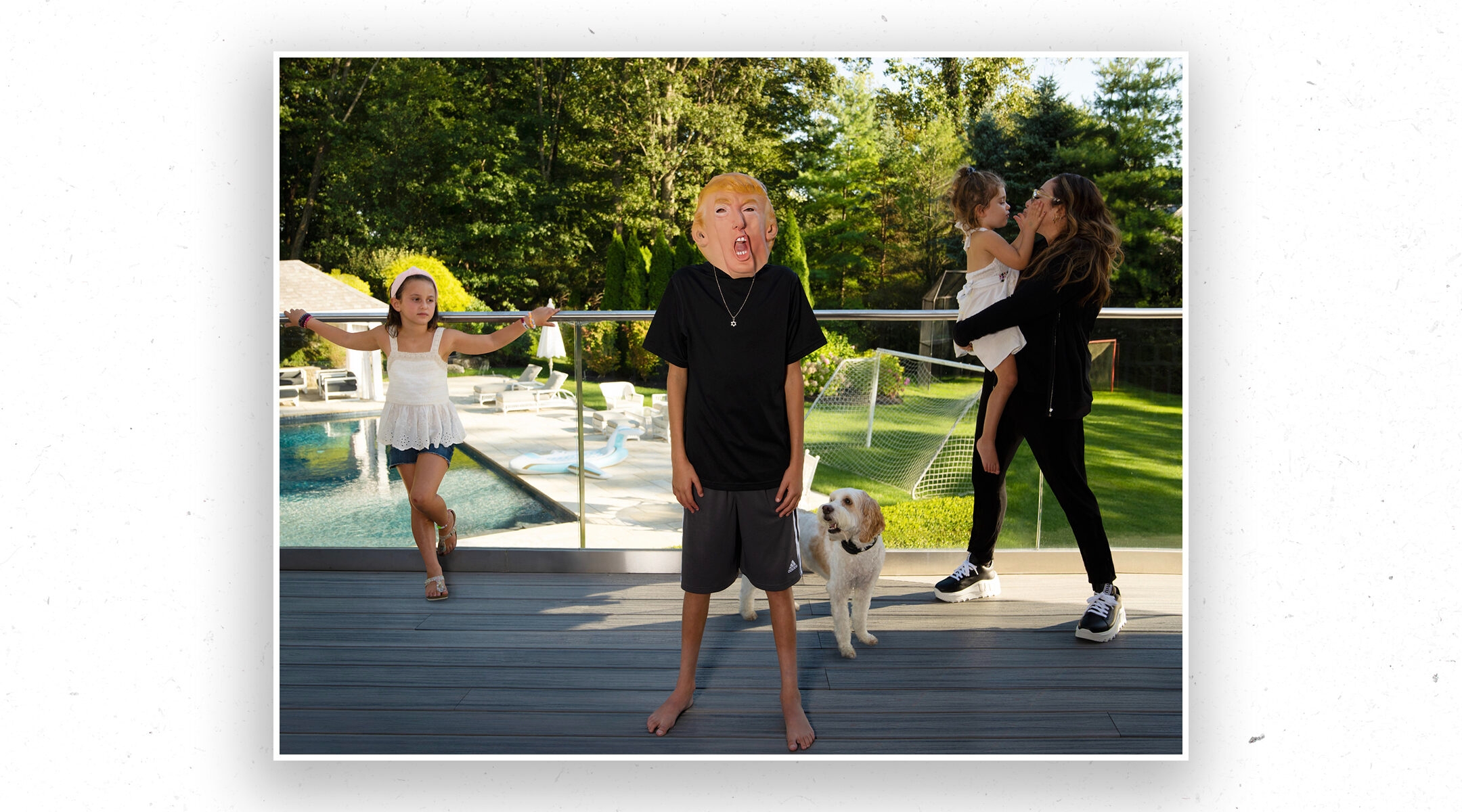 (New York Jewish Week via JTA) — For two decades, the photographer Gillian Laub, 46, has been photographing her colorful, larger-than-life Jewish New York family through weddings, vacations, Jewish rituals and, perhaps most potently, elections and the pandemic.

Her solo photography exhibit “Family Matters,” at New York’s International Center of Photography, which is on display until Jan. 10, includes 62 images along with Laub’s incisive commentary full of family stories. The project is expanded further in the accompanying book of the same title from Aperture.

Told in four acts, the exhibition shows a family criss-crossed by conflicts dividing many American families: privilege, race and Trump-era politics. The throughline of “Family Matters” is Laub’s ambivalence around her family’s wealth and privileged lifestyle. Laub writes in the text that opens the exhibit: “I felt gratitude for our life, but conflicted by our extravagance, especially as I became aware of its social and economic context and consequences.” This conflict culminates in a major rift as the 2016 election approaches and Laub discovers that her parents are full-speed-ahead Trump supporters.

The subsequent political divide threatens the loving closeness of Laub’s extended family. And yet, in today’s polarized America, the political strife also gives a universality to an exhibition that showcases a particular — and particularly theatrical — Jewish American family as they celebrate, argue, mourn and grow over the first two decades of the 21st century.

The photos are more than just political. They’re also intimate, warm, and bursting with eccentricity. The exhibit begins with images of her grandparents, first-generation American Jews whose own parents fled Eastern Europe’s antisemitism. Laub’s grandfather, Irving Yasgur, built a successful real estate business that catapulted their family into wealth and privilege. In a photo titled “Grandma grabbing Grandpa’s tush,” her grandmother rests her hand on her husband’s backside. Their skin may be wrinkled and spotted with age, but her nails are manicured, red and sharp, and his bottom is covered by a zebra-print swimsuit. It’s all affection and humor.

But Laub’s signature irony emerges in the photo “Grandpa helping Grandma out,” in which she shines a spotlight on her perfectly coiffed older relatives as they get out of a limo, dripping in fur. The photo is both critical of its subjects (“look at their moneyed vulgarity!”) and loving (“look at their humanity; look at their tenderness!”). This internal tension, which Laub explores in every image, is what animates the project.

As a photographer, Laub is no stranger to conflict zones. Her photographs of scenes of American racism in the South became a book and an HBO documentary, both called “Southern Rites” (2015). She photographed the bloody toll of the Israeli-Palestinian conflict in her project “Testimony” (2007). She has photographed myriad public figures that could intimidate anyone, from the Obamas to Annie Leibowitz, and she brings this same fearlessness to “Family Matters.”

The exhibit follows Laub as she builds a family of her own with her Israeli husband, whose discomfort with Laub’s family wealth is even greater than her own. The tension reaches its apex when Laub’s parents and her sister’s family become fervent Trump supporters. This horrifies the liberal Laub, who tells her family that she thinks Trump is a racist and a misogynist. Alas, no minds are changed. As she says in her commentary accompanying the exhibit, “it was like screaming into a void.” She keeps photographing: her family at Trump’s inauguration, her nephew in a Star of David necklace and a Trump mask.

In “Mom after yoga,” Laub’s mother lies supine in a luxuriously decorated den in her home. The pandemic has now arrived, and she wears a face mask. Fox News broadcasts Trump’s face on the TV above her. Laub’s anguish is palpable and her relationship with her family becomes strained. 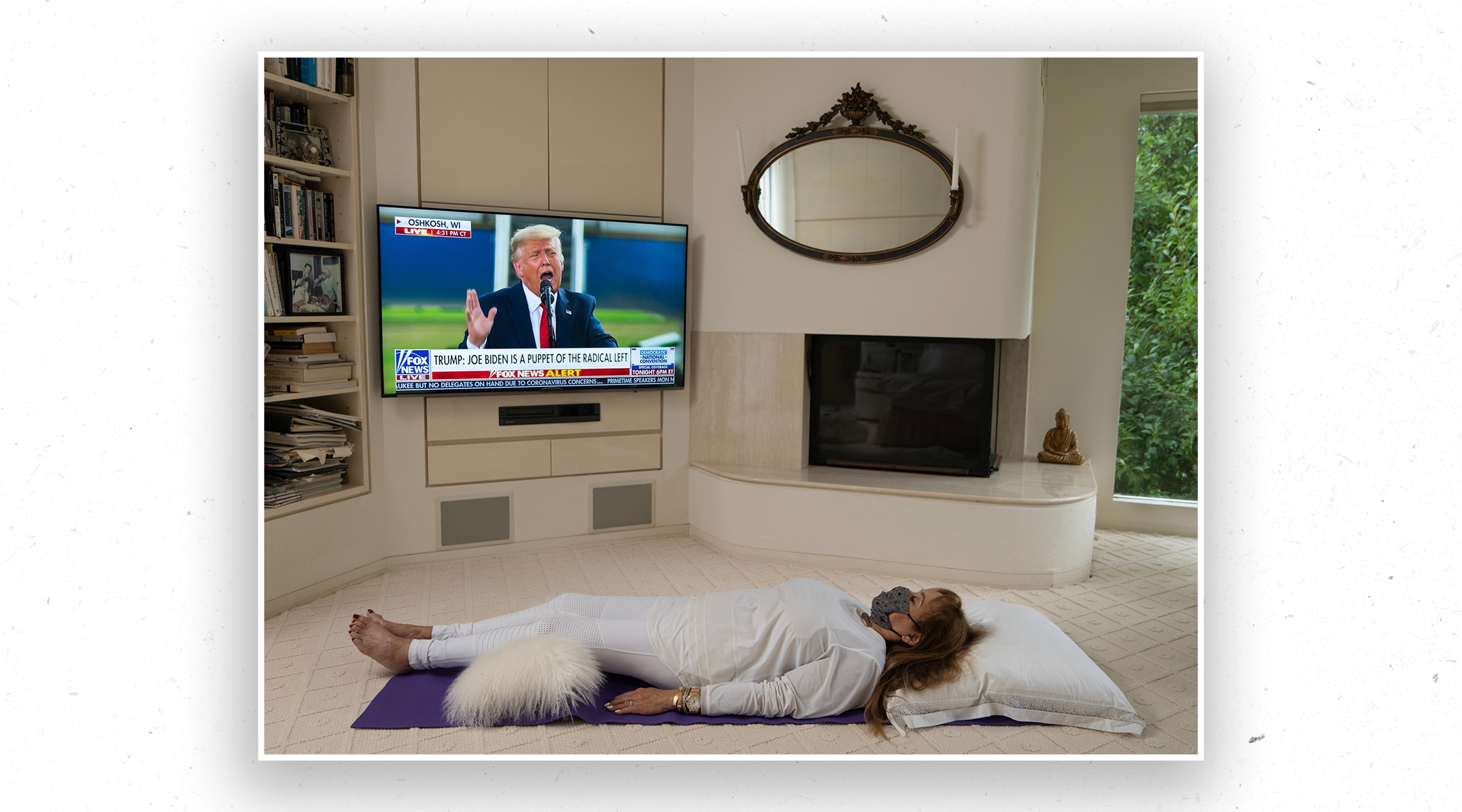 It’s an experience to which many Americans — and specifically Jewish Americans — can relate. Trump is an especially divisive figure for American Jews, said Herbert Weisberg, an emeritus professor of political science at Ohio State University and author of the 2019 book, “The Politics of American Jews.”

“In 2020, about 70% [of American Jews] voted for Biden and 29% for Trump,” he told the New York Jewish Week via email. “The biggest distinction is denomination — about 68% of Orthodox Jews voted for Trump versus 35% of those in the Conservative movement and 17% of Reform Jews.”

The Orthodox Jewish support for Trump, he explained, could be attributed primarily to Trump’s alignment with former Israeli Prime Minister Netanyahu’s hawkish position on the Israeli-Palestinian conflict. Still, the majority of American Jews opposed Trump.

“Surveys showed that most American Jews were more upset by Trump’s statement that there were ‘very fine people on both sides’ of the Charlottesville march that included neo-Nazis, and many viewed Trump’s rhetoric as partly responsible for the synagogue shootings in Pittsburgh and Poway,” Weisberg added.

Of course, when the stakes are this high, the divisions are bound to be strong. And yet, against all odds, after Biden is inaugurated, the worst of the conflict in the Laub family seems to have blown over. The exhibition ends with measured hope. There are photos of the family reuniting outside for a masked, COVID-safe Thanksgiving. And after Biden’s decisive victory, Laub is surprised by her father’s good mood.

“What did you expect?” he asks. “That I would be upset and march in the streets? No, I don’t cry or yell. Life moves on, and I go back to work.”

In her closing commentary, Laub says, “The world still feels so broken to me. But I don’t think the way to fix it is to shatter it into more pieces. Family is complicated precisely because, if done right, it both molds and challenges us. I think the trick isn’t to give up on your own beliefs, or on the people you love. The trick is to end up with both.”

New York Jewish Week: These photos are so sharp and theatrical. Can you talk about the process of taking them over the last 20-plus years?

Laub: I have taken and made over tens of thousands of photographs of my family over the years. They have all happened in different ways. Some are candid moments and others have been recreated snapshots or are choreographed and directed to some extent. I like that the viewer may not know which is which.

The exhibit can be viewed as a series of smaller differences between you and your family that snowball into one big war over Trump. Is that how you see the narrative of the show, as many smaller conflicts around money, lifestyle and politics that build towards something deeper?

I see it connected as one larger narrative about family and how we navigate difficult issues with the people we love the most in the world. Although this is very specific to my own family, it has been amazing to see how many people have felt this connected with their own stories, which is what I was hoping for. Stories are what connect us all. I have always worked in narrative and I believe that time reveals the narrative, which is why “Family Matters” kept unfolding over 22 years. Finally I realized this wasn’t a narrative about just my family — my personal story became a microcosm of what so many people were experiencing and could relate to. There were larger themes that transcended the specificity of my own family.

The photos powerfully communicate a paradox. They are intimate and loving, but also can be glaring and unforgiving, almost like police photos of a crime scene. You seem to be saying, I see you — do you see yourselves? Was there something therapeutic about taking these photos? Does the act of photographing a paradox somehow make the paradox more tolerable? Does it change your perception of it?

Making this work was certainly therapeutic for me. That’s one aspect of the work. It forced me to look inward in ways that were very uncomfortable and unsettling. I think when we go to those difficult places and face them head on, that is where real growth can happen, which is what I think happened throughout this process. The camera and writing have always been how I process, digest and reflect. 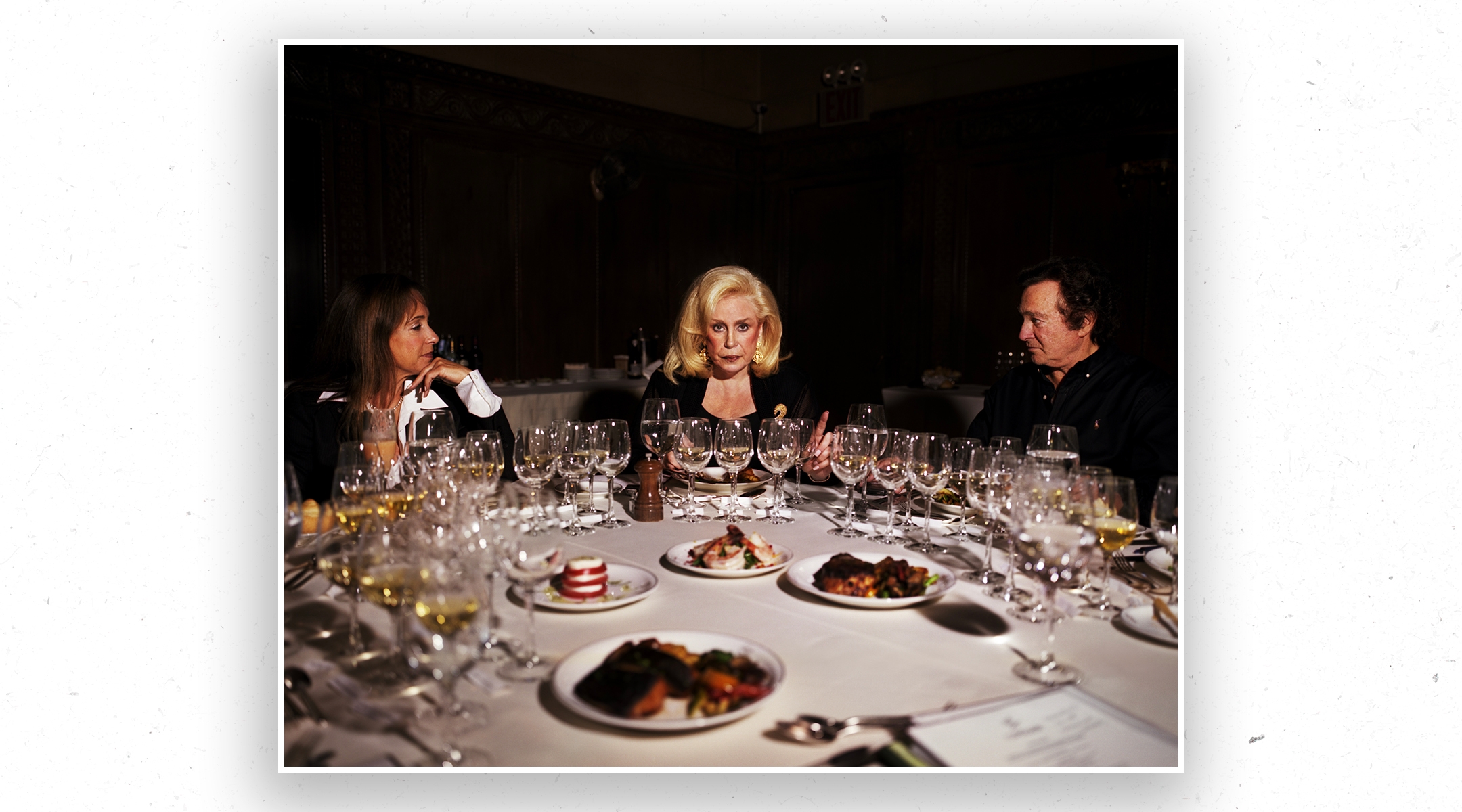 Your photos tell a universal story about America, but they are also so specifically Jewish American. There’s a photo of your nephew’s bris and one of a Yom Kippur break fast spread. There are photos of your wedding, which your parents wanted to be opulent and your Israeli husband and his family wanted to be modest. Your family won and your Israeli mother-in-law had a biting line: “This is what happens when you raise your children in America.” But I could imagine your parents, whose ancestors fled antisemitism, saying the same words but with pride. What do your photos communicate about the Jewish American story?

That’s a big question! I can say that I feel like my family is a typical aspirational Jewish American story, a story that I’ve been thinking a lot about for many years. The image of my grandparents coming out of the limo all dressed up is a prideful image… It symbolizes to me, “We’ve arrived. We’ve made it in America!”

One pivotal story in the book highlights this: I can remember as a teenager growing up in Chappaqua, the local country clubs in our town had a known and mostly unspoken tradition that Jewish and Black people were clearly unwanted. Many of my friends’ parents belonged to those local clubs and I am sure there were a couple of tokenized Jewish or Black members, but when the Trump National Club opened up over 20 years ago my father joined right away. He said it was open and welcoming to anyone.

My family came here as Jews and immigrants seeking their American Dream. They reached a level of success, but never felt accepted fully into white, Christian America. For better or worse, in a way Trump allowed [my dad] access to this American Dream. The Trump National Club accepted Jewish and Black people and all minorities when nobody else did, which is pretty ironic. But perhaps one of the reasons Trump resonated with so many disenfranchised Americans is their hope that they’d have access to this “American Dream.”

The photos depict an emotional bloodbath in your family during the Trump years, the pandemic and the racial justice movement. But the exhibit ends on a hopeful note after Biden’s inauguration. In the exhibit’s epilogue, you conclude, “…Goodness can always be found. The closer you look at people, the more miraculous – and complicated – they become… People can change.” Has your family changed? Or have you made peace with an element of your family that you cannot change?

I didn’t make this work in order to change anyone. So much of the frustration and problems we [my family] had were because of our unwillingness to see the other person’s views. I can say with confidence that we have had more transparent and open conversations since my family has read the book and seen the exhibition. It has enabled us to have an open channel. Nobody is looking to change anyone’s point of view anymore, but I think we all realize the importance of respecting the other; agreeing to disagree and honoring that.

“Family Matters” is on view at the International Center of Photography at 79 Essex St. through Jan. 10.