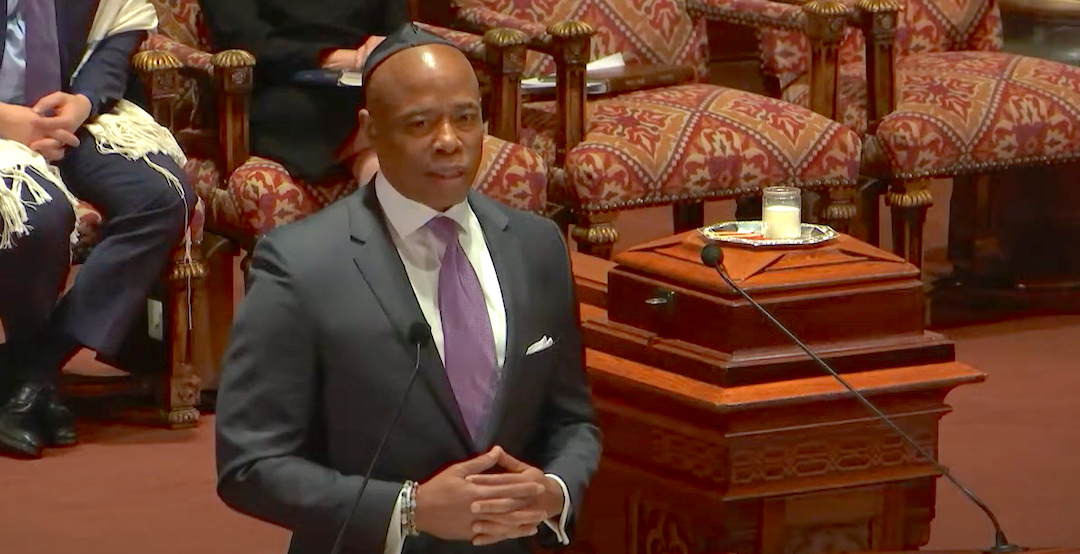 Mayor Eric Adams spoke at Friday night services at Manhattan's Central Synagogue, on the Shabbat following a hostage-taking at a synagogue in Texas, Jan. 21, 2022. (Via YouTube)
Advertisement

Good Monday morning, New York. Here’s a fun fact to kick of this chilly week: On this day in history, in 1656, the first Jewish doctor arrived in the North American colonies. You can learn more about Jacob Lumbrozo’s fascinating life here. Now, let’s get on to some New York news.

The rabbi’s version: “If you are a Jew in America and you are not feeling unsettled, then you are not paying attention.” With these words, Rabbi Angela Buchdahl of Central Synagogue spoke to her congregation Friday night about speaking to the man who held Jews hostage in their Texas synagogue last week.

Nabbed: The NYPD arrested a woman who spat on a Jewish child in Brooklyn and who allegedly told him and his siblings, “Hitler should have killed you all.”

If these walls could schmooze: Chabad social media maven Mordecai Lightstone was renovating his Crown Heights home and found an analog treasure insulating its walls: Yiddish newspapers from a century ago.

Remembering: As a rabbi in Queens and a teacher of Talmud at Yeshiva University, Rabbi Simcha Krauss supported the expansion of women’s rights in Orthodox Judaism. “Some say it is a modern revolution,” he once said. “I say that’s the way you should do it.” He died Thursday at 85.

Wanted: The NYPD is seeking to identify a suspect who, on Saturday, Jan. 22 at approximately 1:20 AM, assaulted a 21-year-old Hasidic man at Troy Ave and Carroll St. in Crown Heights.

The hostage-taking in Texas will tempt synagogues to close their doors to strangers. That would be a tragic mistake, writes Rabbi Joshua Ladon of the Shalom Hartman Institute of North America.

Rabbi Rami Shapiro leads a My Jewish Learning class on the teachings of Kohelet (Ecclesiastes), one of the most vital books of the Hebrew Bible. 2:00 p.m.

Join Dr. David Kraemer of the Jewish Theological Seminary to discuss the complicated emotion of shame and how Jewish tradition “feels” about it. Register here. 2:00 p.m.

Join the New York Jewish Week and UJA-Federation of New York on Jan. 25 at 12:00 p.m. for a conversation with Scott Shay, Yossi Klein Halevi and Dr. Mijal Bitton as they discuss Shay’s new book “Conspiracy U: A Case Study” and the challenges facing American Jews on campus from both the far right and far left.  Register here for this virtual event.

Photo, top: Mayor Eric Adams spoke at Friday night services at Manhattan’s Central Synagogue, on the Shabbat following a hostage-taking at a synagogue in Texas, Jan. 21, 2022. (Via YouTube)