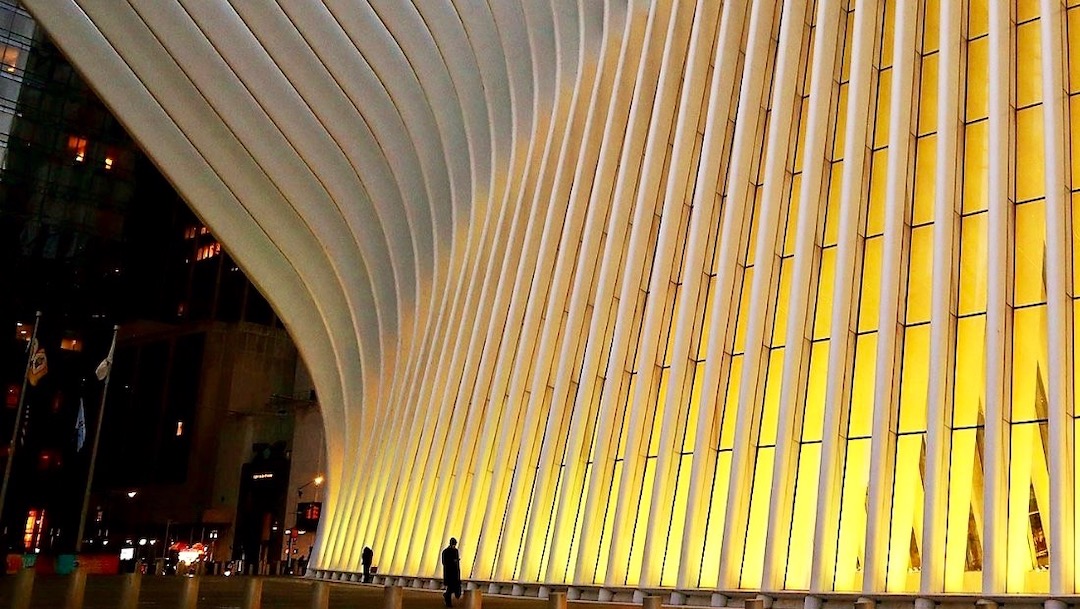 The Oculus Transportation Hub in Lower Manhattan was lit up in yellow on Thursday to mark International Holocaust Remembrance Day. Gov. Hochul and Mayor Adams ordered the campaign, which included One World Trade Center, City Hall and Niagara Falls. (Courtesy of the Port Authority of NY & NJ).
Advertisement

Shabbat shalom, New York. Cuddle up during what could be a snowy weekend with our downloadable, printable digest of the week’s best stories. Go here to sign up for The Jewish Week/end email, and find today’s edition here.

The life of spice: The Queens-based spice company Burlap & Barrel wants to change the way you think about seasonings. Founders Ori Zohar and Ethan Frisch talk to our colleague Shira Hanau about connecting the cinnamon you sprinkle on your cereal to the tree it came from in Tanzania.

Where’s Wallace?: Wallace Shawn stars in his sixth Woody Allen movie, “Rifkin’s Festival.” In an interview with the Jewish Telegraphic Agency, the actor and playwright talks about working with an industry pariah, criticizing Israel’s defenders in a recent Nation article and his complicated connection to his Jewishness.

“Maus” trapped: Cartoonist Art Spiegelman is baffled by a Tennessee school board’s decision to remove his graphic memoir about the Holocaust, “Maus,” from its curriculum. “I think they’re so myopic in their focus,” Spiegelman, who grew up in Queens, told CNN, amid a media storm about the district’s decision.

Holocaust literacy: Bronx City Council Members Eric Dinowitz and Marjorie Velázquez said Thursday that they would introduce a resolution in support of a State Assembly bill that would audit Holocaust education in New York. “This bill will help ensure our children are learning about this terrible period in our history, and taking those lessons to ensure the horrors of the past are not repeated,” Dinowitz, chair of the City Council’s Jewish caucus, said.

Shine a light: Major landmarks in the city and state were lit up in yellow on Thursday to mark International Holocaust Remembrance Day. Gov. Hochul and Mayor Adams ordered the campaign, which included One World Trade Center, City Hall and the Oculus Transportation Hub in Lower Manhattan (top, in a photo courtesy of the Port Authority of NY & NJ).

Rabbi to the rescue: The Queens Jewish Link reports a heartwarming anecdote about Rabbi Mordechai Zev Hecht, of Anshe Sholom Chabad in Kew Gardens, who came to a family’s rescue when they were trapped for hours on the Jackie Robinson Parkway last Friday after an 18-wheeler crashed into an overpass. “I see a furry ushanka hat hopping the barrier,” said Adina Goldberg, who was stuck in her car with a hungry infant. “A tzadik who goes by the name of Rabbi Mordy Hecht is coming toward us with a cup of hot water, a bag of snacks, and drinking water.”

Wordle, Spelling Bee, crosswords: What does your favorite puzzle say about you? Andrew Silow-Carroll explains.

David Shmidt Chapman is a rabbinical student at The Jewish Theological Seminary, but before that he was a theater director. In this week’s Torah portion, he writes, Moses uses all the techniques of the stage to deliver God’s script.

Can’t make it to synagogue for services this week? Our partners at The Hub have a list of local and national synagogues streaming their Shabbat morning services.