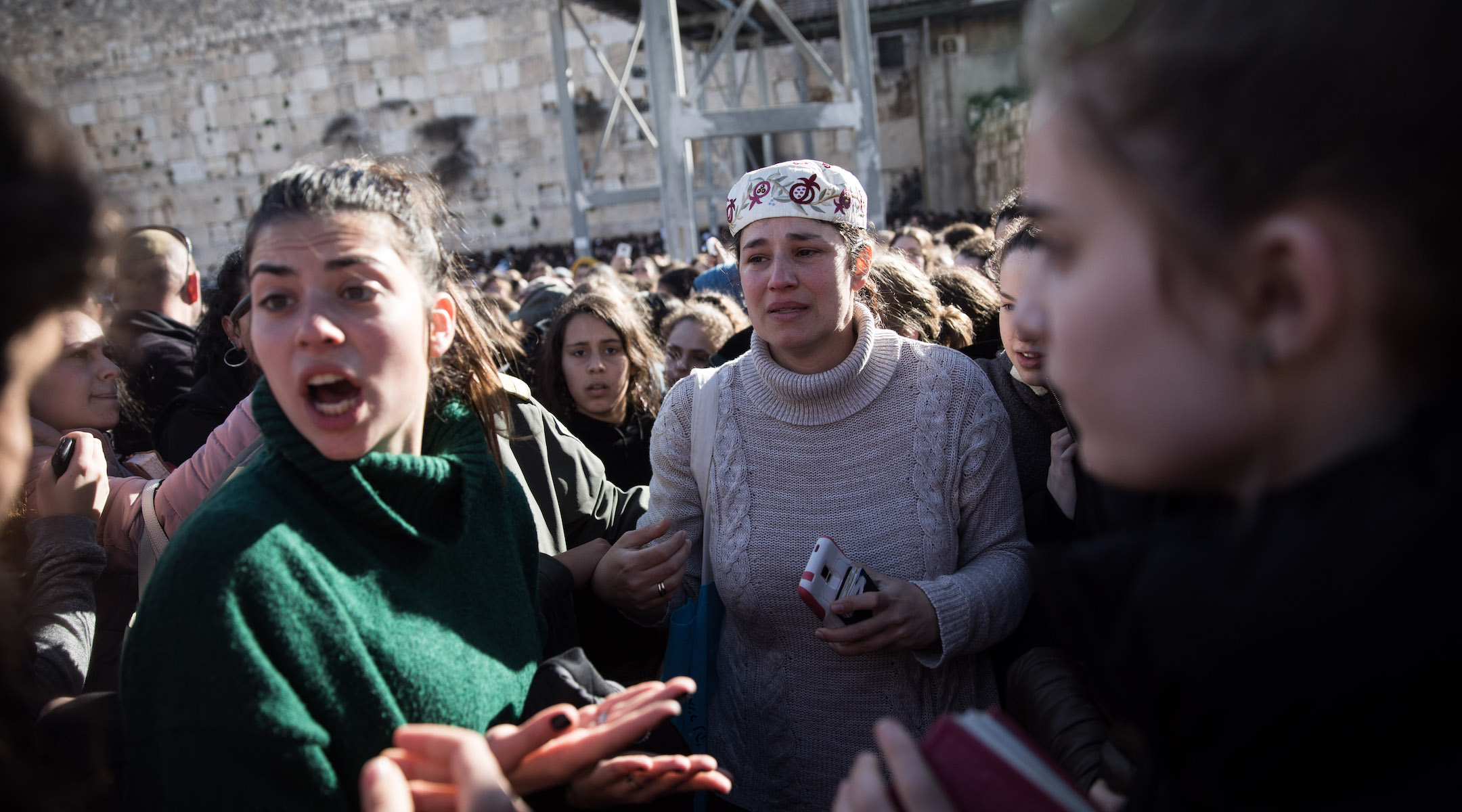 Members of the Women of the Wall movement hold Rosh Hodesh prayers as thousands of ultra-Orthodox women protest against them at the Western Wall in Jerusalem's Old City, March 8, 2019. (Hadas Parush/Flash90)
Advertisement

(JTA) — Israeli Prime Minister Naftali Bennett repeatedly cited his American-born parents as the source for what he called his “special closeness” with American Jewry in an interview with the Jerusalem Post last week.

But some American Jews took a very different message about their relationship with the prime minister from the interview.

In it, Bennett said his government would not implement the 2016 Western Wall agreement that he once championed, which would have set up a permanent space for egalitarian prayer at the Western Wall.

“The continued denial of religious freedom is directly contradictory to the Prime Minister’s and other Ministers’ stated desire to bridge the gap between Israel and world Jewry,” leaders of the Conservative movement said in a statement Sunday. The head of the Reform Movement in Israel released a similar statement Friday.

“It is both infuriating and upsetting when the Prime Minister of a ‘change government,’ wherein all heads of his coalition have committed to implementing the Western Wall Agreement, yields to extremist factions that object to the Agreement and its implementation, just as they did with the former Prime Minister,” Anna Kislanski, CEO of the Israel Reform Movement, wrote in a Facebook post. “The eyes of Jews across Israel and the Diaspora look to the current government with the hopes of implementing a suitable compromise that responds to all of the Jewish people and does not capitulate shamefully to bullying and violence.”

Bennett’s comments and the reactions they elicited mark the latest flashpoint in a years-long conflict between the American Jewish community’s two largest liberal movements and Israel’s religious institutions, which are still dominated by the Orthodox rabbinate — even after the election last year of a more diverse government coalition that has floated various religious reforms.

The 2016 agreement, mediated in part by Natan Sharansky, the former Soviet refusenik who then served as head of the Jewish Agency, was forged through meetings between American leaders and the Orthodox group that controls the Western Wall plaza. The main plaza is divided into separate men and women’s prayer spaces where women are not allowed to read from a Torah scroll, in line with traditional Orthodox practice.

The agreement would have seen a permanent and enlarged space for egalitarian prayer set up at an archaeological site south of the traditional prayer site’s main plaza. Signs that lead to the main plaza also would have directed visitors to the egalitarian site, which currently consists of a raised platform that does not allow visitors to approach the actual wall.

But in 2017, facing pressure from his haredi Orthodox coalition partners who opposed the deal, then-Prime Minister Benjamin Netanyahu scuttled the agreement. When Bennett’s coalition came to power, the deal was expected to be revived, especially because there are no haredi Orthodox parties in the current coalition.

But Bennett and Religious Affairs Minister Motti Kahana have decided not to implement the compromise.

According to a December report in Israeli news site Zman, Kahana chalked the decision up to “incitement and hatred, especially by people from Likud, who are latching onto it.” Kahana was referring to violent protests at the Western Wall in November the start of the new month, when hundreds of mostly haredi Orthodox men protested and attempted to block activists with Women of the Wall, a group that advocates for women to be allowed to read from the Torah at the wall, from conducting services.

Calls to protest Women of the Wall were shared by several right-wing Israeli politicians, including Netanyahu, currently the head of the opposition in the Israeli Knesset, or parliament, and members of his Likud party.

In his interview with the Jerusalem Post, Bennett said his government could not act on the compromise due to lack of consensus on the issue within the coalition.

“Not all of our dreams will come true in this government,” Bennett said.

The statement from the American Conservative leaders, which included heads of essentially all of Conservative Jewish organizations, said they “feel betrayed.”

“It is unconscionable that Prime Minister Bennett has shelved these plans in light of the fact that alongside a majority of ministers and MKs in the present government who concur with the implementation, the majority of Israelis also believes that there should be free access for all Jews to pray according to their custom at the Western Wall. It is inconceivable that the government of Israel should continue to prevent freedom of prayer and equal rights to all Jews,” they said.