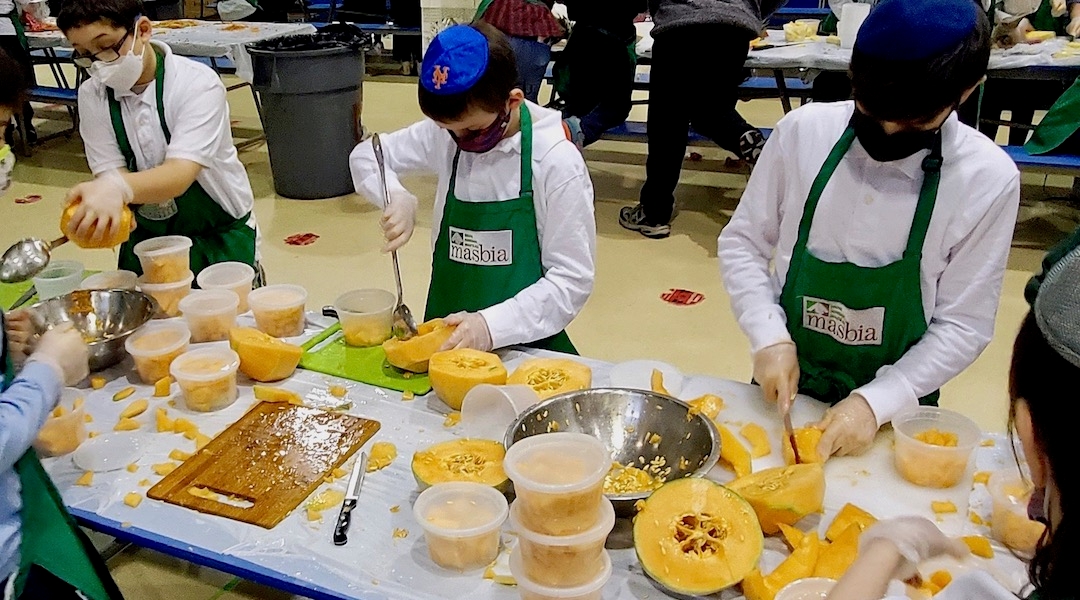 Students at Manhattan Day School clean and dice hundreds of pounds of fresh fruits and vegetables to be distributed to the needy through the Masbia network of kosher pantries, Feb. 2, 2022. (Courtesy Masbia)
Advertisement

Good morning, New York. We’re singing “Nobody Does It Better” in honor of singer-songwriter Carly Simon, 76, who was nominated yesterday for the Rock & Roll Hall of Fame’s Class of 2022. Fun fact: Simon, who grew up in Greenwich Village, is the daughter of Richard L. Simon, the Jewish co-founder of the publishing house Simon & Schuster. (In related — if not necessarily Jewish — news: iconic Queens hip-hop group A Tribe Called Quest was also nominated. Mazels!)

Plea deal: Aaron Mostofsky of Brooklyn, the Jewish judge’s son who wore fur pelts and a bulletproof vest when he entered the U.S. Capitol on Jan. 6, 2021, pleaded guilty to federal charges related to the insurrection. His father is Steven (Shlomo) Mostofsky, a Kings County Supreme Court Judge and former president of the National Council of Young Israel.

Power play: New York State and Israel are teaming up for the second time on a contest matching Israeli startups with the New York Power Authority. The winning startup gets $1 million to work with NYPA on technologies that “advance the State’s clean energy transformation,” Gov. Hochul announced Wednesday. Details here.

Refuah shelayma: Rabbi Yitz Greenberg, the Modern Orthodox philosopher, scholar, activist and founding dean of SAR Academy, a Jewish day school in Riverdale, is being treated for mantle cell lymphoma. In an upbeat letter on his Facebook page, Rabbi Greenberg said he chose a treatment that balances risks of serious side effects with a higher quality of life.

Lincoln Square Synagogue announced a $5.5 million gift from hedge funder Mark Tsesarsky and his wife Robyn Tsesarsky. Rabbi Shaul Robinson wrote in a letter to congregants that the money “will allow us to pay off our mortgage in its entirety” and be used for building improvements and upgrades.

Whoops: Was the Holocaust about race? Are Jews white people? What is it with Whoopi Goldberg’s last name? Our colleague Gabe Friedman explains all you need to know about the controversy surrounding the comedian and “The View” host, who was suspended for remarks she made about the Holocaust.

Writer and educator Daniel Walber discusses American Jewish opera composers who have been pushing boundaries and reconceptualizing just what opera can do. Register here for a Zoom link. Presented by American Jewish Historical Society. 12:30 p.m.

Eleanor Reissa discusses her memoir, “The Letters Project: A Daughter’s Journey,” with journalist and author Sandee Brawarsky. The book was inspired by 56 letters handwritten in German by Reissa’s father in 1949 — only four years after Auschwitz — to her mother, also a refugee, already living in the United States. Reserve tickets here. 1:00 p.m.

Photo, top: Students at Manhattan Day School clean and dice hundreds of pounds of fresh fruits and vegetables to be distributed to the needy through the Masbia network of kosher pantries, Feb. 2, 2022. (Courtesy Masbia)