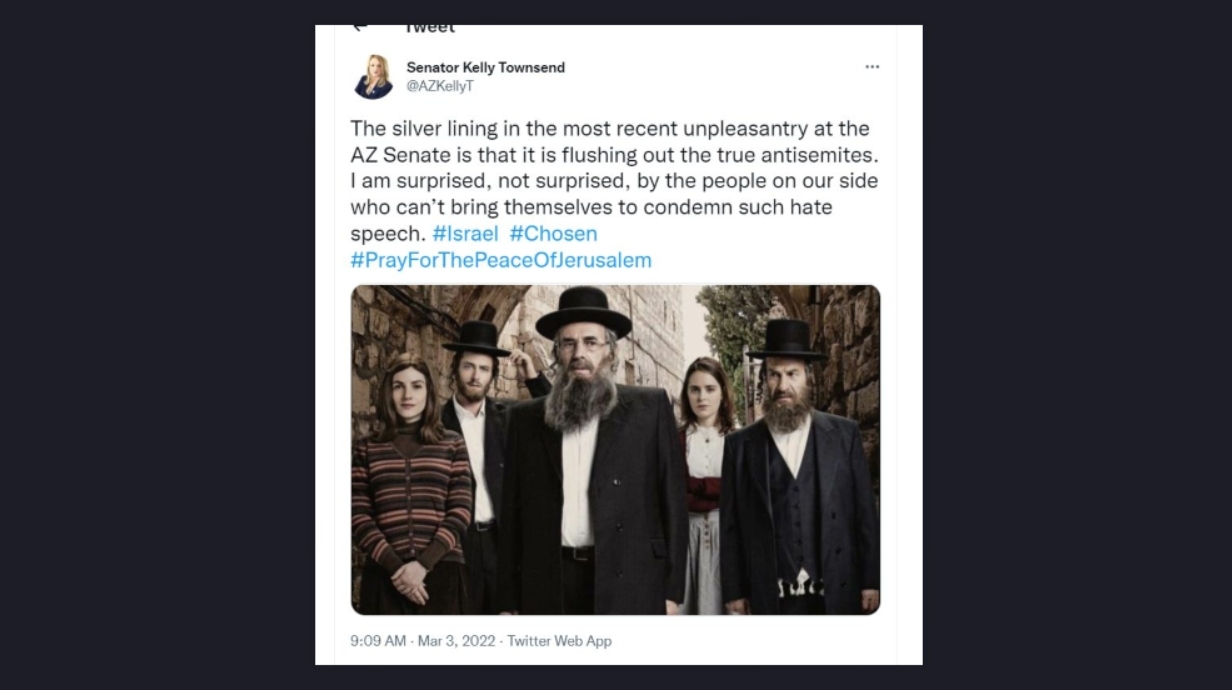 (JTA) — An Arizona state senator wanted to make it clear that she reviled the antisemitism of one of her colleagues, so she shared an image of the cast of the Israeli family drama, “Shtisel.”

Kelly Townsend, a Republican, no longer wants the endorsement of her colleague, Wendy Rogers, after Rogers drew national attention for a slew of antisemitic and white nationalist statements this week.

“The silver lining in the most recent unpleasantry at the AZ Senate is that it is flushing out the true antisemites,” Rogers said Thursday on Twitter. “I am surprised, not surprised, by the people on our side who can’t bring themselves to condemn such hate speech. #Israel #Chosen #PrayForThePeaceOfJerusalem”

The illustration she chose was a cast photo of “Shtisel,” the drama about a dysfunctional haredi Orthodox family in Jerusalem. In the publicity still, Nukhem Shtisel, played by Sasson Gabbay, is staring balefully at the brother he despises, Shulem Shtisel, played by Doval’e Glickman.

Although it would certainly be accurate to state that Jews love “Shtisel,” it wasn’t clear why Townsend, who is running for the U.S. House of Representatives, chose the image to illustrate that she stands with the Jewish people.

Townsend soon took down the tweet, and replaced it with another, with the same text, this time illustrated by the Israeli flag.

The Arizona Mirror noted that Townsend and Rogers once were close, but Townsend was determined Thursday to make clear that is non longer the case.

“I emphatically reject @WendyRogersAZ endorsement of my campaign for Congress,” she said. “I do not wish to accept financial donations that she solicited & will respectfully return them.”